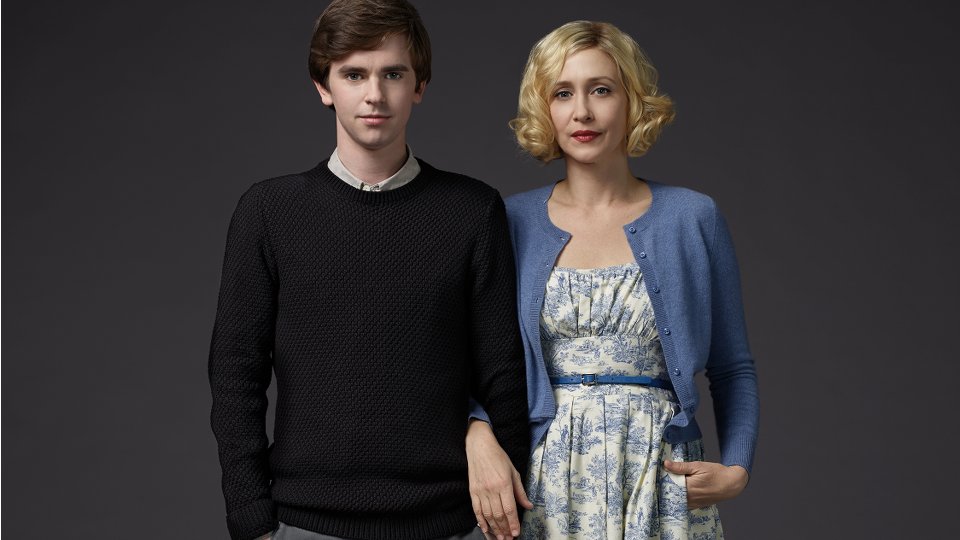 Norman (Freddie Highmore) got ever closer to his future psychotic self in the season 3 finale of Bates Motel, which aired tonight in the UK.

If you haven’t seen the season 3 finale of Bates Motel and want to avoid spoilers, we suggest you stop reading now. If you have seen it and want to hear our thoughts on the next season keep reading.

OK so Bates Motel, at the time of writing this, hasn’t officially been renewed for a fourth season but one of the show’s producers claims that it’s definitely going to happen. With a season finale like the one that aired tonight, we can’t see it not happening!

In the episode Norman (Freddie Highmore) reacted badly to Norma’s (Vera Farmiga) attempts to get him to seek treatment for his behaviour. After viewing a potential facility, Norma attempted to approach it with Norman but he wouldn’t listen to her. Instead he packed his suitcase and told her he was running away with Bradley (Nicola Peltz), which worried her even more considering the fact she thought Bradley was dead thus assuming Norman was imagining things.

Norman followed through with his promise and ran away with Bradley but the two didn’t get very far before Norman started hallucinating that Norma was with them. Forcing Bradley to pull over, Norman transformed into his mother (literally as the scene was played by Vera Farmiga), and killed Bradley by bashing her head against some rocks.

Elsewhere in the episode Dylan (Max Thieriot) came clean to Norma about Bradley’s faked suicide, Emma (Olivia Cooke) was convinced to go through with the lung transplant by Dylan, and Romero (Nestor Carbonell) made all of Norma’s problems go away by killing Bob Paris (Kevin Rahm).

The season finale left us with plenty of things to think about so we’ve gathered our thoughts and compiled a list of 10 things we want to see from the next season of the show.

1. Norma to realise just how sick her son really is. Ok so she’s come on leaps and bounds over the past season, but Norma still has no clue what Norman is truly capable of. He’s killed Miss Watson, Cody’s father, his own father (we think) and now Bradley. He’s also tried to kill Caleb and he’s been pretty violent towards Dylan too.

2. Norman to go even more psycho. Season 3 was a definite turning point for Norman and the lines between reality and madness are really starting to blur. He’s taking on his mother’s characteristics, and wearing her clothes, so the only way to go is even crazier. What’s he going to do next? We can’t wait to find out.

3. More conflict with Norma and Norman. The two characters were so close in the first season but over the past two seasons they’ve been at odds more than they’ve gotten along. Norma has to find out that Norman killed Bradley and that will serve to push them further apart as well as brining out Norma’s over-protective side.

4. Emma to survive her lung transplant. We spent most of the season fearing that Emma was going to die, and now the hope of a transplant is in her imminent future we hope she makes it. Emma is one of the only grounding influences on the show and we’d miss her (a lot) if she went.

5. Dylan and Emma to make a go of it. They are pretty sweet together aren’t they and it would be the most stable relationship either of them has had (which is both reassuring and alarming). We hope they get the chance to explore where romance may take them.

6. Caleb (Kenny Johnson) to come back. We actually liked having Caleb around for the season and we’re pretty sure that Norma’s account of their childhood isn’t quite what actually happened between the two of them. The siblings made great strides in rebuilding their relationship and we liked how Caleb had started to bond with Dylan.

7. Normero. Is that what the fans are shipping these days? Norma and Romero have so much sexual tension, that we feel it bursting out of the screen. That almost kiss in season 3 was excruciating and now that Romero has helped Norma solve her problem with Bob, we’re hoping they might be able to finally give in to the urges.

8. Less dodgy town dealings and much more Norma and Norman. The weakest part of Bates Motel has always been the sub-plots around the dodgy characters in White Pine Bay and the drug business. Quite simply put we just don’t care. We want as much Norma and Norman in our 10 episodes a year as humanly possible.

9. Dylan to get a better storyline. Poor Dylan has pretty much been on the outskirts of the Bates family, and the show, since he arrived. All of his storylines pretty much have been apart from the main storyline but we want to see him in the middle of all of the action. He needs to support Norma in dealing with Norman and we have a feeling he’s going to need to protect her too.

10. Plenty more nods to Psycho. One of the things we’ve always loved about Bates Motel is the little nods to Psycho it gives every season. We’re holding out hope that in the final series we’ll get to meet Marion Crane but until then more homages to the Hitchcock classic will be very welcome.

Bates Motel will return to A&E in the US and Universal in the UK in 2016 if it is confirmed for a fourth season.