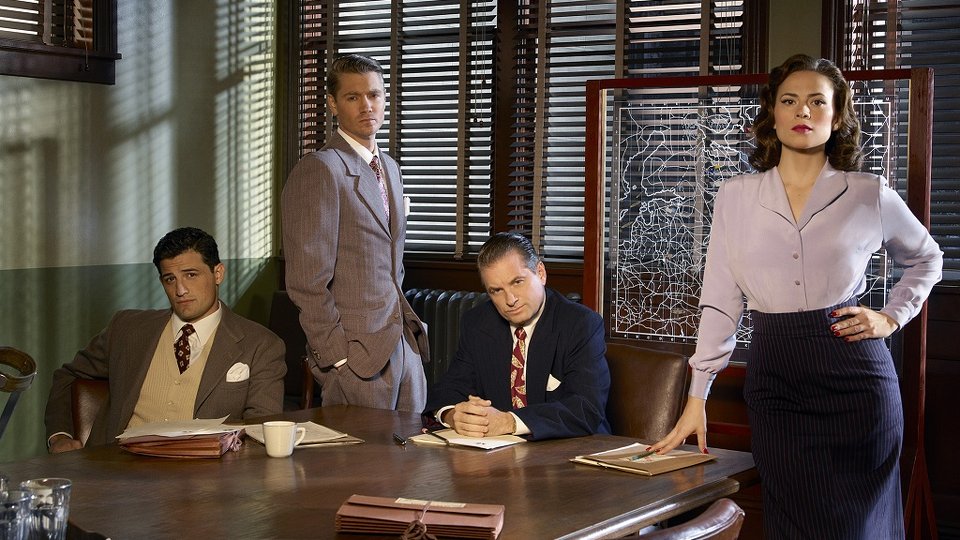 Marvel’s Agent Carter has finally found a home in the UK and will arrive on FOX this July.

It’s 1946 and Agent Peggy Carter (Hayley Atwell reprising her role from Marvel’s “Captain America” films) is working for the covert SSR (Strategic Scientific Reserve). Relegated to administrative work, she is bored and frustrated. Sworn to protect those who cannot protect themselves, Agent Carter is a highly trained field agent and her male colleagues have made a huge mistake underestimating her. When old acquaintance Howard Stark (Dominic Cooper, Marvel’s Captain America: The First Avenger) finds himself being framed for unleashing his deadliest weapons, he contacts Peggy — the only person he can trust — to track down those responsible, dispose of the weapons and clear his name.

If caught going on these secret missions for Stark, Peggy could be targeted as a traitor and spend the rest of her days in prison — or worse. As she delves deeper into her investigation, she discovers things are not as they seem. Is Stark as innocent as he claims? Marvel’s Agent Carter also stars James D’Arcy (Broadchurch) as Edwin Jarvis, Chad Michael Murray (One Tree Hill, A Cinderella Story) as Agent Jack Thompson, Enver Gjokaj (Dollhouse) as Agent Daniel Sousa and Shea Whigham (American Hustle, The Wolf of Wall Street) as Chief Roger Dooley.

Marvel’s Agent Carter is FOX UK’s first acquisition since Jeff Ford took on the role of Managing Director, FIC UK, in April. He commented, “Marvel’s Agent Carter is blockbuster Hollywood entertainment at its best. With high production values and a stellar UK and international cast, the series is the perfect addition to FOX UK’s summer line up, continuing the channel’s commitment to bring exclusive, original and breakthrough series to a UK audience.”

Dayna Donaldson, General Manager, Media Distribution, Disney UK and Ireland adds, “Marvel’s Agent Carter is another great example of gripping storytelling from ABC Studios, so we’re delighted that it has found a home in the UK on FOX. We’re sure that the compelling, fast-paced and mysterious storylines will keep UK viewers on the edge of their seats this summer.”

Marvel’s Agent Carter will kick off in the UK this July.

In this article:FOX, Marvel's Agent Carter