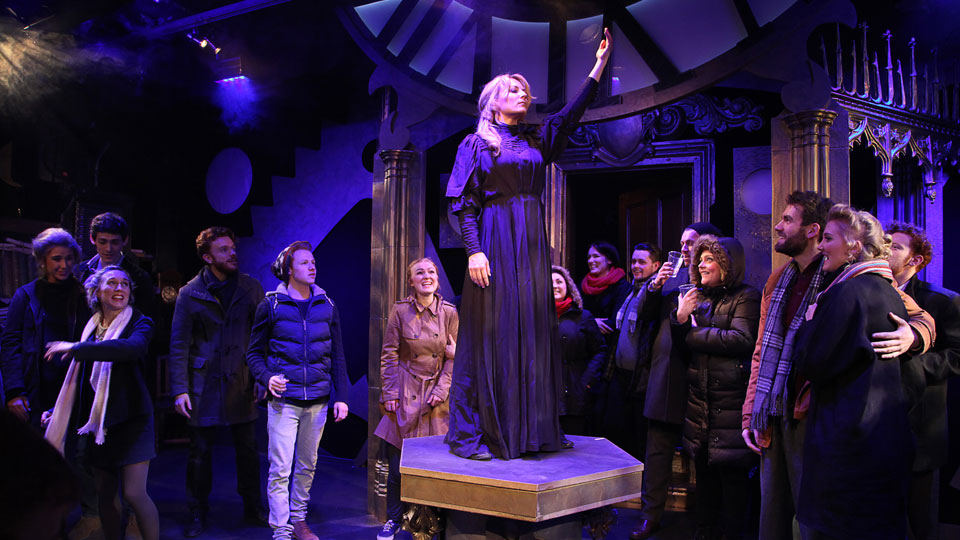 The Landor, one of the best places to go in London for new musical theatre, currently hosts the hugely ambitious The Clockmaker’s Daughter. With its impressive sense of scale and stunning design work, this production belies its relatively small setting as it strives for the epic. This new musical tells the story of a clockmaker, Abraham, who creates a mechanical woman, Constance, to replace his lost love – only his machine has a life and personality of her own. To protect her, but also control her, Abraham forbids Constance from leaving his house, but curiosity gets the better of her. When Constance becomes celebrated in the small town of Spindlewood for her dress-making skills and falls in love with a young flesh-and-blood man called Will, it’s only a matter of time before her real identity is uncovered.

The Clockmaker’s Daughter very successfully replicates the fairytale element that is mentioned in the programme notes. In-keeping with the fairytale genre, it has a good moral heart, and tackles the subject of how we treat difference: Constance’s mechanical nature can be vicariously replaced for any social minority group. It is strongly derivative of classic tales in a similar vein: there’s more than a whiff of Victor Frankenstein and his monster; and elements of Shakespeare’s fantastical The Winter’s Tale are lifted into the storytelling. The nagging feeling is that, although The Clockmaker’s Daughter is a well-crafted story, it’s one that’s been told before, and so it offers few surprises.

The real triumph of the production is superb design work by David Shields, which sees ingenious use of the space working in harmony with sumptuous aesthetics. Richard Lambert’s lighting complements it perfectly, leaving The Clockmaker’s Daughter beautiful to look at. This helps as there is a fair bit of fat on the story: there’s a large cast of characters competing for our attention and our sympathies, and the main plot takes a while to find its feet and establish itself. The performances on the whole are very good, with Alan McHale’s loveable Will and Jo Wickham’s boo-hiss villainy as Ma’ Riley two standouts. Jennifer Harding’s portrayal of Constance is at its best in full song and with strong emotional content to play, but her child-like interpretation of innocence doesn’t always seem the right choice.

The musical is at its best during the songs, which are on the whole memorable and striking. It’s great to hear string instruments bringing out the melodies. The ensemble singing Raise a Glass is a thrilling moment, and the romantic number If You Could See My Heart is full of emotion. The music is stronger than the book, which is punctuated by a few too many clichés and moments of exposition-heavy dialogue.

Overall, there are several aspects of The Clockmaker’s Daughter that are excellent, and it’s a great new family-friendly musical with magical elements. However, the subject matter is well-trodden, and it doesn’t always live up to its inspirations, so it aspires to brilliance but falls a little short.