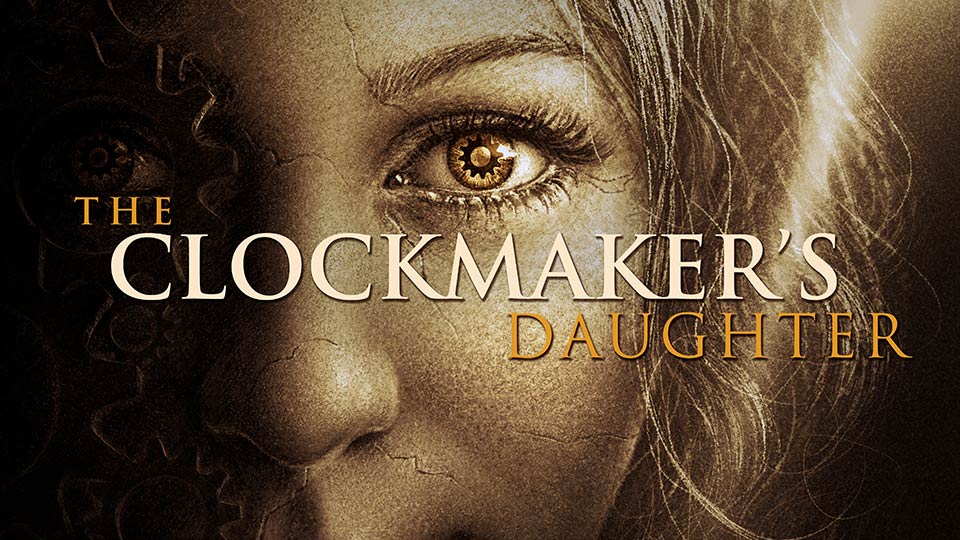 The Clockmaker’s Daughter is an original musical by Michael Webborn and Daniel Finn that received its sell-out debut at the Landor Theatre in 2015. Since then, it has attracted eleven award nominations and been revived in other venues. Now, the cast and band has been into the studio to capture the production for posterity, and allow its growing legion of admirers to listen to it whenever they like. This is great news for musical theatre lovers.

A town’s annual tradition is the turning of the key. A clockwork statue of a young woman is in the town square, and legend has it that she was once alive. A century earlier, Abraham, a clockmaker, mourning his dead daughter, had crafted her likeness in clockwork. Only when ‘Constance’, his creation, was wound up, she became a sentient being!  Abraham tries to protect her from the outside world, but Constance has so much to offer the local town and wants to take life by the horns. Her dressmaking skills earn her attention, and she catches the eye of local boy Will. But what would happen if her secret was discovered?

The album cover description is “an original musical faerytale” and this is apt. The Clockmaker’s Daughter weaves many mythical elements into its traditional storytelling, so it has a cosily familiar feeling. There’s a touch of Pinocchio, of Frankenstein, of the Wizard of Oz… The allegories are well-developed, and you’d have to have a heart of stone not to be charmed by them. The Clockmaker’s Daughter invites the suspension of disbelief. If you believe in faeries, or want to, then this is the musical for you.

It opens with The Turning of the Key, a great scene-setter, sung by Fra Fee as the Narrator, who later doubles as romantic interest Will, and brings in the ensemble who gently satirise the familiar plot elements of the story about to unfold. But the musical really takes off with the soaring You’re Still Here, which showcases the astonishing talents of Ramin Karimloo, whose gamut of emotions in a few short minutes is breathtaking. By the third track, A Modest Modiste, a touch of comedy and light relief has been introduced by Hannah Waddingham as the antagonist Ma Riley. This is followed by a slick, foot-tapping two-hander between Karimloo and Christine Allado as Constance. The rich variety of musical approaches is captivating.

The songs are well-written and structured. Inevitably, there are some emotional high-points likely to make the hairs on the back of your neck stand on end. Perhaps the extended high notes that arrive with Constance’s moment of self-realisation in A Story of My Own, or the thrilling Irish-jig inspired Raise A Glass, or the romantic two-hander If You Could See My Heart, or certainly the high drama of the Clockwork climax.

If there’s a weakness to The Clockmaker’s Daughter it’s that the story isn’t as strong as the songs that bind it together. Constance’s dress-making ambitions lack high stakes, and the set-up for that interest is a touch contrived. And Ma Riley isn’t especially malevolent as the leading antagonist. Perhaps the message here is that the bigotry and prejudice that resides in all of us is the real villain of the piece, and The Clockmaker’s Daughter has a clear moral message at its centre, which, along with a cracking set of songs and some stellar performances on the recording, is its selling point. This makes up for the more forgettable aspects of the overall plot.

The recorded version of The Clockmaker’s Daughter is fantastic. The actors’ voices have been mixed well with the band, so that the sound levels are perfectly clear, avoiding the problem of live performance where it can be a struggle to distinguish vocals above the percussion, depending upon where you sit. The show reveals new depths once experienced in a purely auditory way. Whether you like your musicals traditional or original, this studio cast recording ticks both boxes and gives you plenty of great songs to enjoy.

The cast includes Christine Allado as Constance, Fra Fee as Will, Ramin Karimloo as Abraham, Lauren James Ray as Amelia, Matthew Croke as Henry, Hannah Waddingham as Ma Riley and Graham Hoadly as the Mayor.