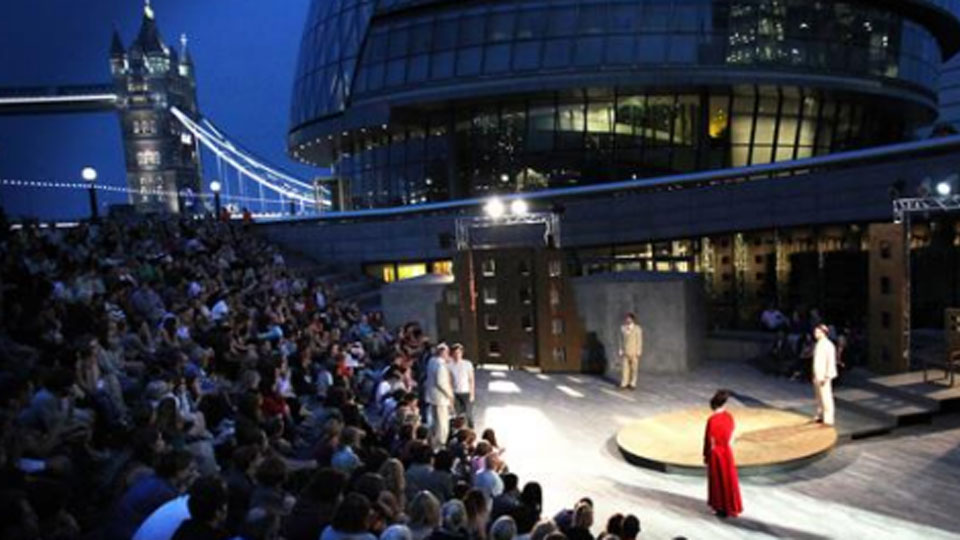 As the modern world re-evaluates its role in international conflict, Gods and Monsters Theatre presents a free, action-packed, open-air theatre season exploring how our ancestors regarded the morality of war, in comedy and drama. Running since 2003, this is London’s only ‘free to all’ annual season of classical theatre.

With one show for all the family and one for older audiences, London’s Free Open-Air Theatre Season aims to make theatre more accessible than ever before whilst not compromising on quality. In 2014, 10% of the audience at The Scoop had never been to the theatre before with three quarters claiming price as a major inhibitor to attending productions in more traditional environments. This season aims to continue introducing new audiences – irrespective of age, education, financial circumstances, physical ability or ethnicity – while still welcoming avid theatre fans. There’s no need to book – just turn up and take a seat!

Captain Show-Off! – adapted from the Roman comedies of Plautus by Phil Willmott, with original music by Theo Holloway, 6pm.

This joyous family show invites you to the bustling Roman town that is the home of self-proclaimed war hero Captain Show-Off. But, if he thinks everyone will join his fan club he’s in for a shock. Expect chaos, confusion and mix-ups galore as a colourful cast of clever slaves, daring lovers and cunning tricksters take full advantage of the mayhem caused by his arrogance.

This brand new show is based on the comedies of Plautus, whose jokes and japes inspired modern pantomime, a hit Stephen Sondheim musical, Frankie Howerd’s Up Pompeii and lots of our favourite sitcoms.

As the skies darken over The Scoop so does our story. In some of the most powerful drama ever written, the Ancient Greek playwright Euripides spins his gripping account of the courageous women on opposing sides of the Trojan War – their sacrifices, triumphs and tragedies. This new adaptation by Lisa Kuma of Iphigenia at Aulis, Hecuba and The Trojan Women will resonate powerfully today, as the brutal use and abuse of women in conflicts around the world remains an urgent and burning issue.

The More London Free Festival runs from 3rd June – 24th September 2015 and boasts a schedule packed with exciting and varied events, including live music, an outdoor theatre season, and sports and film screenings.

Check out www.godsandmonsterstheatre.com for details.

Location The Scoop is located on the south bank of the River Thames, between London Bridge and Tower Bridge, next to City Hall.

In this article:Gods and Monsters, Open Air Theatre, Women of Troy