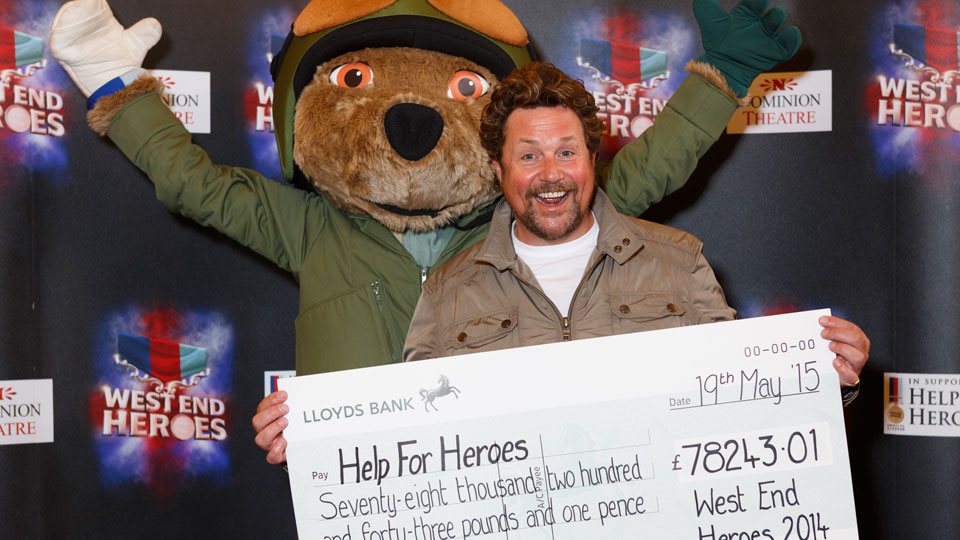 Two-time Olivier Award winner and multi-platinum recording artist Michael Ball handed over a cheque for £78,243.01 – the proceeds from the 2014 West End Heroes gala he hosted at the Dominion Theatre in aid of Help For Heroes.

Michael also announced that the unique event will once again unite the country’s top military musicians with West End performers and productions in a dazzling showcase of showstopping numbers, unlikely song mash-ups and stunning choreography and precision drilling, at the Dominion Theatre on Sunday October 4th, with a target of £100,000.

Handing the cheque to Hero Bear he said: “I want to say a massive personal thank you to everyone who took part and those who came to see West End Heroes. We are so proud of the money raised and what we achieved – we had the best time doing the show, and it was a great night!”

The host for this year’s West End Heroes is still to be announced.

For some, recovery can be swift – for others, it is a life-long journey with changing needs along the way. Help for Heroes aims to support this process however long or short it may be.

Bryn Parry, Co-Founder and CEO of Help for Heroes said: “We’d like to thank West End Heroes for their dedication towards raising such an amazing amount for Help for Heroes over the past two years. We’re thrilled to work with West End Heroes again in 2015 and look forward to an another fantastic event at the same time as raising a significant amount of money to help our injured Servicemen and women and their families.”

Tickets are now on sale at www.westendheroes.com.