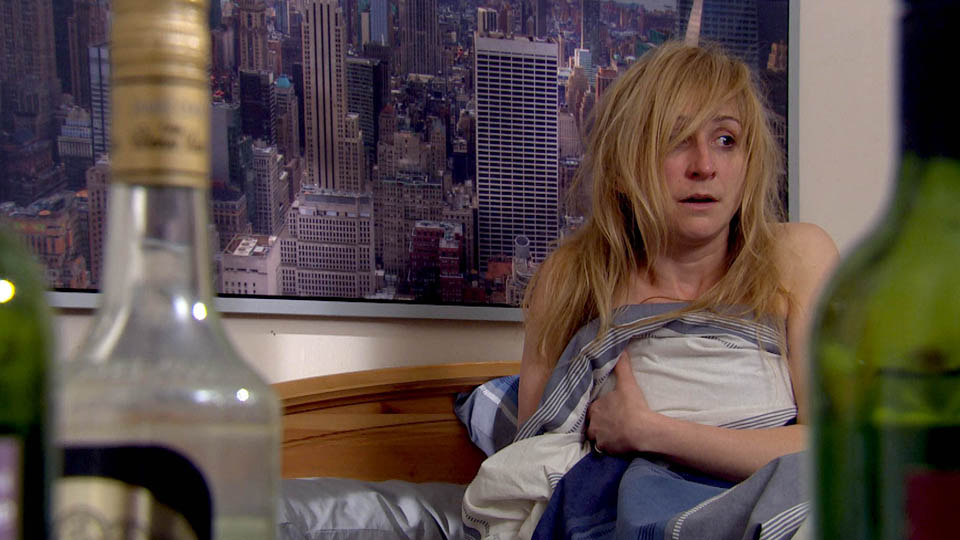 Welcome to our regular look at what’s coming up this week for the residents of Emmerdale.  Read on…

Just what is Laurel playing at?  She just can’t seem to help but push away everyone who’s trying to help her and this week she realises that it may not have been her smartest move as friends and family continue to blank her.  Marlon finally concedes to talk to her and warns her that she needs to stay away from everyone, especially the children, until she’s sober.  Will it be the wake up call she needs?  Not quite….

When her card is declined in David’s shop (buying some booze!) she goes to Marlon for the cash and is rebuked by him and everyone else.  She ends up going to a random bar and relying on male strangers to buy her drinks, but just how far will she go to get her next fix?

When she hasn’t returned home the next morning Doug and Marlon are very worried, enlisting Harriet to help out with some old police contacts.  They need not worry though as eventually a shamed Laurel arrives back in the village and spins a yarn to cover the fact she woke up in a stranger’s bed.  Just as it seems that Marlon is thinking of giving her another chance, an unwelcome guest arrives and the truth unfolds.

Ashley wants to help Laurel and she finally makes a big admission to him and later to Rhona also, but with Marlon asking Rakesh for the number of a good divorce lawyer is it all too late?  When Ashley hears of Marlon’s intentions he hastily tells him about Laurel’s positive steps and asks him to reconsider as he fears her motivation may fade without his support.  What will Marlon do?

Rachel’s plan to leave the village is foiled

Sam wishes he hadn’t told Rachel about what Jai did to Charity as now she’s determined to have it out with Jai.  At Amba’s party she refuses to leave Archie with Jai saying it’s not safe after what he did to Charity.  Jai persuades Rachel to go to the factory with him under the guise of a problem and when they get there Rachel demands full control of Archie’s life only for Jai to surprise her by trapping her, alone and screaming.

Later, she comes up with a plan to secretly leave the village with Archie, Sam and Sampson, but Sam goes against her wishes and tells Lisa and Zak what they are planning.  Lisa rushes to tell Jai  and he scuppers her plans, but who will an angry Rachel take out her frustration on?

Jai tells Rachel that they are going to re-register Archie to add his name to the paperwork as the child’s father.  Meanwhile, Sam covers where he got his injury and a guilty Rachel can only apologise.

Ross gears up for a fight

Ross insists to Debbie that he has sorted things with Charlie, so why does Cain later see him fight training?  Cain is still not happy at how much Debbie seems to care about Ross and pulls Pete to one side to give him a serious pep talk.  When Pete tells Debbie about the chat she’s less than pleased with Cain and goes round to see him insisting she does not have feelings for Ross.

When Ross shows up with a battered face Debbie tries hard to cover her concern as he explains that he took part in a bare knuckle fight for Charlie to pay back some of the money.  A shocked Debbie takes him to have a chat with Zak, hoping his stories from his fighting days will put Ross off.

Later, Charlie arrives at the garage and leaves both Debbie and Ross concerned over his impending big fight.  Meanwhile, Zak is convinced Ross is a winner and prepares to pawn jewellery (including Lisa’s wedding ring) so he can put a bet on Ross to win.

Betty’s back and is dismayed that no one seemed to have missed her.  What has she been up to on her travels?

Rakesh apologises to Priya for his jealousy and has more than one proposal for her.

Carly sets her sights on buying David’s shop as the Metcalfes get closer to moving to Portugal, but with the bank refusing her a loan, will Bob step in?

Kerry decides to have a go at a business course just like her beau Dan.