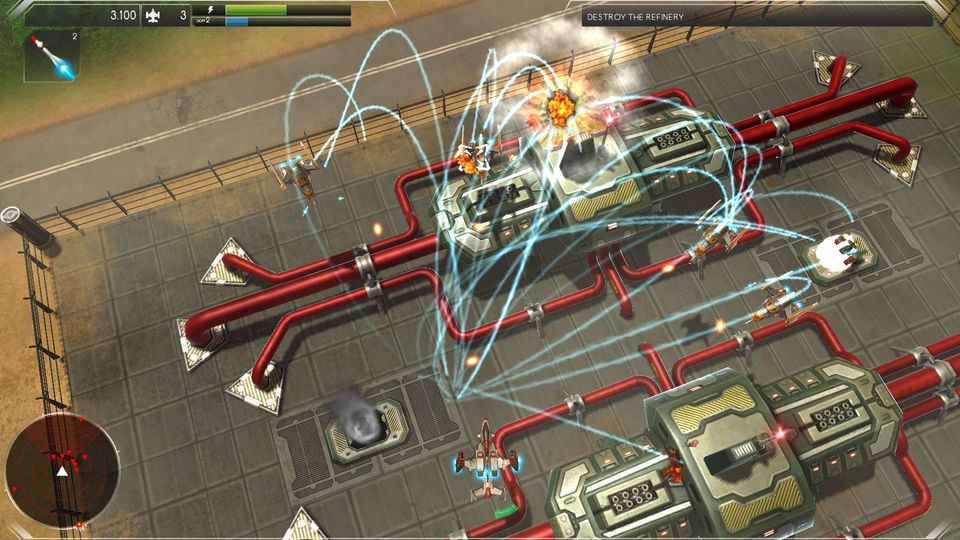 Project Root, from Argentinian indie developer OPQAM, aims to be a modern take on the classic Shoot ‘em up genre. Having been a fan of the genre for nearly as long as I’ve been alive I was keen to check it out. (The Bitmap Brothers Xenon 2: Megablast from 1989 is a personal favourite).

The game features a little story, you play as rebel ace Lance Rockport who pilots an advanced hover fighter known as the F-72 Zonda. You’re up against the ruthless Prometheus Corporation who naturally are hell-bent on world domination.

With the story out of the way the game actually sounds pretty good on paper. A modern remake of the Shoot ‘em up. Multiple free-roaming levels. Brutal bullet-hell gameplay. The screenshots also look rather lovely filled with projectiles and explosions. However it all quickly falls apart when you start to play the game.

Your ship is controlled with both thumbsticks, one to move and the other to turn. Environments are rendered in 3D so when you turn you actually appear to stay still at the bottom middle of the screen while they rotate around you.

Your ship has two main guns, one that can fire projectiles at air targets and another that can fire at ground targets. These are bound to the gamepad triggers and as you have unlimited ammo you can just keep them pressed in. They might as well fire automatically and there is little skill involved. You do also have a limited special weapon that can be fired with a shoulder button.

You have a set range for hitting ground targets meaning you need to get a bit close to them. Your ship can take quite a bit of damage but it’s wise to move out of the way of incoming projectiles. You do however get 3 lives so if you do die you just respawn as long as you have a lives remaining. If you run out of lives then you need to restart your current mission.

Initially projectiles are quite easy to avoid but this becomes more difficult as they increase in numbers. You also need to keep an eye on your radar as enemies seem to love shooting you in the back and due to your ships position it can be hard to spot them until it’s too late.

Levels are large and you must fulfil objectives. Getting around takes time due to the large number of enemies. Objectives are relayed to you in the bottom right of the screen in the smallest font I’ve ever seen. Trying to read it is tough and far harder than it needed to be.

There is also no map so getting to where you need to be can be tricky. There’s an arrow to point you in the general direction of your next objective but when you follow it and find an invisible wall it is frustrating. It can be a lot slower paced game that I was expecting and you can find yourself retreating a lot and trying to thin the enemies out.

As you play you earn XP which can be spent on ship upgrades between missions. It takes a while before you notice much benefit but the upgrades are needed to tackle later missions.

Project Root gets some of the basics right but sadly it completely forgets to include fun. It’s hard to work out just what is wrong with it. Shoot ‘em up fans might want to check it out but there are definitely far better examples of the genre around. I’m afraid I found most of it to be a rather boring slog to get through.

Advertisement. Scroll to continue reading.
In this article:Project Root, PS4, Xbox One