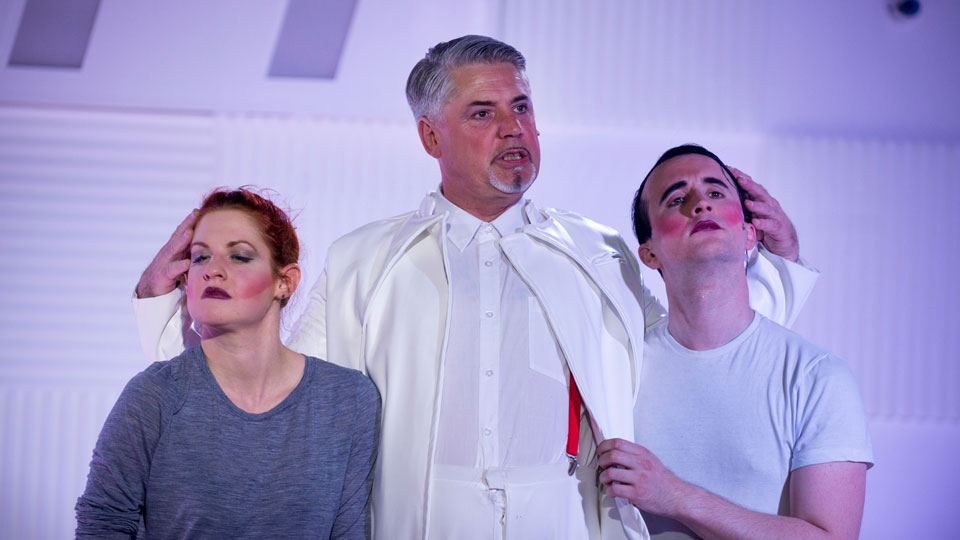 Shock Treatment explores what Brad and Janet Majors did next, after their Rocky Horror Show adventures. Previously only made into a movie, this King’s Head Theatre production marks its world premiere on stage.

The action takes place inside a small-town American television studio, where the output of the channel is decided by the unscrupulous Farley Flavors (Mark Little), who effectively controls the whole town. Janet Majors (Julie Atherton) brings her husband Brad (Ben Kerr) to take part in a reality TV-show about broken relationships to discuss their marital woes. Brad is prescribed shock treatment by crazy sibling doctors Cosmo and Nation McKinley (Adam Ryhs-Davies and Nic Lamont) and is effectively tortured whilst Janet concentrates on achieving fame, fortune, and sex-goddess status.

Although over thirty years old, and written as an acerbic and  prescient satire of Eighties culture, Shock Treatment stands up remarkably well today, since the intervening decades have seen western culture become ever-more obsessed with instant fame and living vicariously through reality television. Although the flavour of Shock Treatment is every bit as absurd and surreal as its illustrious predecessor, where you just have to go along with the ludicrous unfolding of the plot, it’s ultimately more relevant to mainstream audiences. Whereas The Rocky Horror Show is a cult with a pseudo-religious following, baffling to the outsider left out in the cold, there’s far more that the uninitiated can connect with in Shock Treatment.

There are several superb elements to this production. The major boon is that the ensemble fully commits to the heightened reality and melodrama of the piece. It’s overplayed, but it needs to be, and a united front from the cast successfully creates a unique world, and a captivating theatrical experience for the audience. Mateo Oxley is especially impressive as the permanently smiling, cut-throat presenter Ralph Hapschatt. We loved his egomania and sexy dance moves. Julie Atherton is also on fine form as Janet Majors, who is essentially the main character since she goes on the biggest journey in this piece – from frumpy housewife to the kinky dupe of the studio bosses. Nic Lamont and Adam Rhys-Davies give the audience plenty of laughs as the sinister caricatures the McKinleys. The set, lighting and costume design work in happy harmony, with the white background and oddly changing colours of the costumes shoring up the illusion of artifice and face-value.

There are a few reservations with the production as a whole. One is the perennial problem in small venues of attaining the right sound balance between music and vocals during the songs – and sadly too much of the lyrics are drowned out unless the actors belt. There are a few inconsistencies with the concept too: the audience is effectively the studio audience for much of the action, but characters say and do things to shatter that illusion – it’s an idea that hasn’t been fully thought through. Similarly there are a few songs that don’t move the story along at all and interfere with the pace, though the most successful numbers, especially Looking For Fame, feature an interaction of actors.

Shock Treatment will appeal to Rocky Horror Show aficionados, but it comes recommended as it reaches out further and wider than that. If you like larger-than-life shows with an infectiously silly humour, there’s plenty to enjoy here.