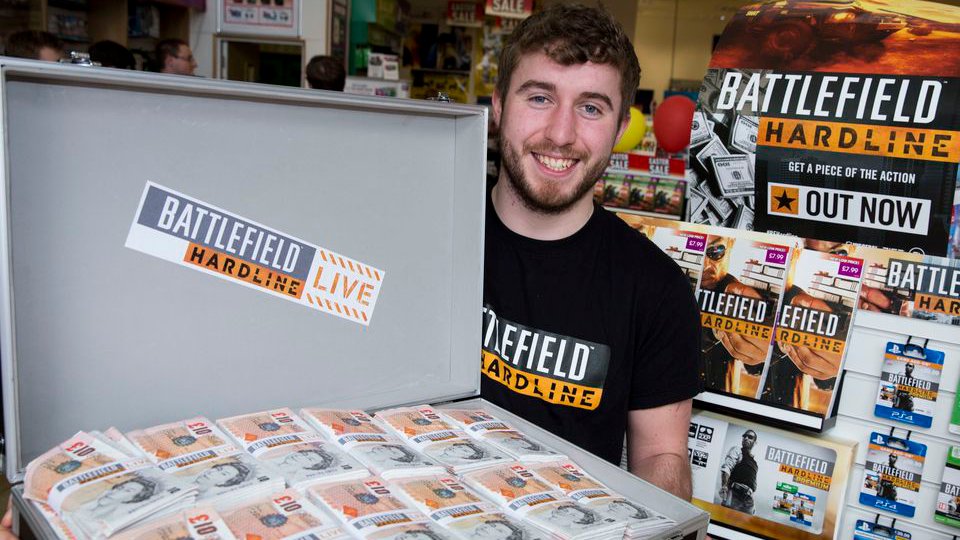 Alongside the release of Battlefield Hardline on Origin for PC, PS4, PS3, Xbox One and Xbox 360. Electronic Arts UK also launched Battlefield Hardine: Live, a high adrenaline, high stakes experience based on the criminal fantasies of the game, where teams could compete for a prize of £10,000.

Now the £10,000 prize has been won by a crew led by Matt Kerr from Preston. Matt and four friends travelled down to London where they took part in the controlled yet immersive theatrical experience. They were tasked with getting in to a secure complex, rescuing a VIP, breaking in to a vault protected by multiple codes and getting as much loot as they could in the allocated time while avoiding patrolling guards and CCTV cameras at all times. Following eight days of intense competition at the secret Central London location, it was Matt that came out on top as the winning crew leader to claim the £10,000 bounty.

Crews headed to London from all over the UK to enter the world of crime and revenge and take part. Electronic Arts and theatre company differencEngine gave players the chance to lead their crew in the experience that drew inspiration from three of Battlefield Hardline’s new game modes – Heist, Blood Money and Rescue as well as the multiplayer maps Growhouse, The Block and Derailed.

Scores for crews were calculated by dividing time taken to complete the job by the total amount of loot they extracted, resulting in a final loot-per-minute score. Matt led his crew, The Usual Suspects, to a mammoth score of £542,750 per minute, more than £50,000 per minute more than any other crew that took part! Check the official site for the full leaderboard.

Having won a place in Battlefield Hardline: Live by first taking part in a nationwide Evidence Sweep at GAME Preston, Matt took part on the competition’s first night on Wednesday 18th March 2015.

All crew leader Matt has to do now is decide if he’s going to keep the £10,000 bounty or share it with his crew… Would you split the winnings or take it for yourself? Let us know in the comments!

[quote by=”Dan Sheridan (@EA_ActionMan), UK Social & Community Marketing Manager”]You could tell Matt’s crew The Usual Suspects meant business as soon as they arrived. They hadn’t travelled all the way from Preston to just take part. Matt had assembled a great crew and they communicated really well once inside the experience. We couldn’t believe how much they took from the vault![/quote]

[quote by=”Matt Kerr, Winning crew leader”]We’re all massive Battlefield fans so this was right up our street. We planned as much as we could and all had set roles for the mission. When we came in with a great score on the first night we didn’t think too much of it as we knew there were a lot of crews to come through and compete against. It’s been a tense week watching the leader board, I can’t believe we held on![/quote]