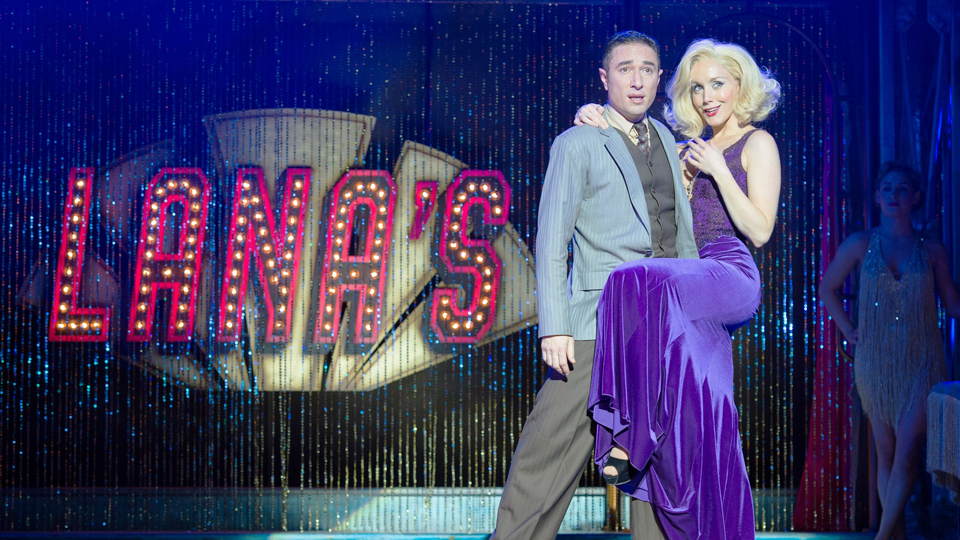 1940s movie star Bobby Burns is brutally murdered on the Hollywood backlots of Los Angeles. Soon trapped behind bars, Tony DeLuca (Vincent Simone) is framed by the killer. DeLuca and his lover Sadie Stauss (Flavia Cacace) make moves to attempt to unmask the real culprit and dance their way to freedom.

In recent years, the popularity of Strictly Come Dancing has provided a surge of interest in dance and professional contenders Vincent Simone and Flavia Cacace have rightly become household names. The spectacle of Simone and Cacace’s live performance are the major draws to this production, showcasing their exquisite dance skills in a relentless cavalcade of boundless performances to classic hits from the Forties and beyond.

From ballroom quickstep to Latin and even a shade of disco, Dance ‘Til Dawn celebrates all manner of dance styles, conveying a love story through movement and form. The keystone to the production is Simone and Cacace’s duos, imbrued with a stage chemistry which will emotionally move the hardest of hearts. The dance is at once feverishly fast yet balletic and elegant, drawing lines and shapes in a performance which proves that actions speak louder than words. There is also great play in Simone and Cacace’s effortless drive, which is ultimately inspiring and uplifting with every move.

As a show which is mainly driven by its visuals, Ed Curtis’ book is knowingly hokum, ingeniously presenting a hard-boiled detective as stage narrator. Teddy Kempner delivers downbeat Tommy Dubrowski with irresistible relish, charmingly parodying the classic Raymond Chandler formula of detective fiction. Embracing its mechanisms as a means to move from one dance number to the next, Curtis’ satirical bridges are also taught little commentaries on the absurdity of hack writing and a refreshing companion to the visceral elegance of Simone and Cacace’s dance routines.

Dance ‘Til Dawn boasts exceptional musical direction from Chris Egan, which has all the pomp and punch of a big band sound, married with the richness of a full orchestral ensemble. Oliver Darley as The Voice is liltingly smooth whilst Abbie Osmon provides an earth-trembling intensity in her vocal performances as Lana.

Karen Bruce’s direction is imaginative and resourceful, engaging with a beautifully designed set which oozes a studio backlot feel, replete with details such as a hand-cranked movie camera. James Whiteside’s lighting design is also expertly presented, seamlessly addressing the needs of dance with subtle side-lighting, capturing form and shape whilst growing into impressive expanses of animated colour for the big numbers.

Effectively a jukebox dancical, Dance ‘Til Dawn is a visual feast which at its heart is a dance show that expands as both a comedy and musical in equal measure. An upbeat and nostalgic celebration of the golden era of Hollywood fortified with mesmerising dance sequences and evocative music, it is a heady non-stop treat of movement and song which is not to be missed.

Samuel Paynehttp://samuelpayne.weebly.com
Reviewer of Theatre in the North, including releases of classic film and television.
Previous article
Emma Thompson and Bryn Terfel in Sweeney Todd
Next article
World premiere of RichardRocks this October

‘Inside Number 9’: watch the trailer for series 7