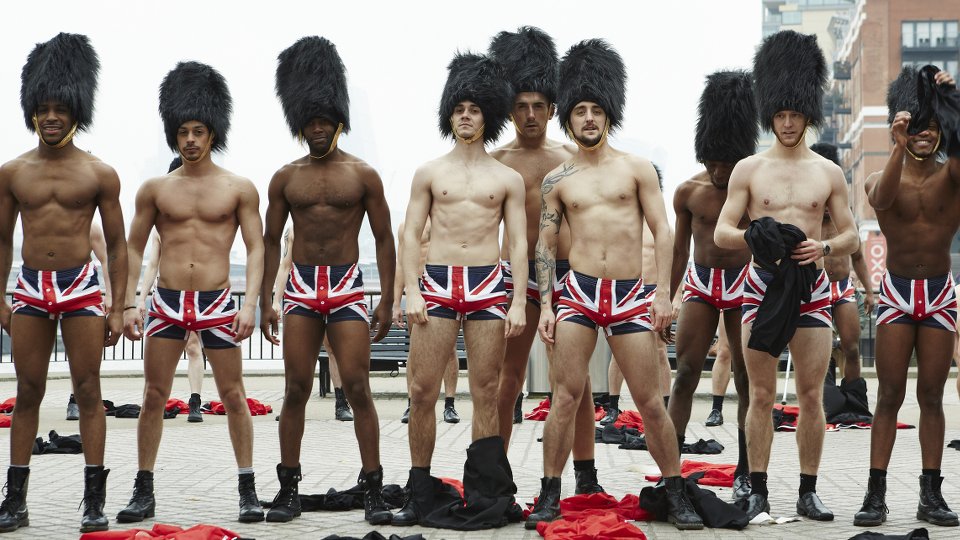 Ahead of the UK premiere of The Royals, a troupe of The Queen’s guards performed a racy routine at London’s Southbank.

35 dancers, all dressed as members of The Queen’s Guard, performed a unique version of the iconic Changing of the Guard providing Londoners and tourists with a fun, tongue-in-cheek recital to help launch E!’s first scripted drama series.

The Guards marched along London’s Southbank before stripping down to their Union Jack pants.

The Royals depicts the lives of a fictional monarchy in modern times where power is everything, limits do not exist, and trust is a luxury this family can’t afford. Leading the stellar cast are Elizabeth Hurley and Vincent Regan as Queen Helena and King Simon, along with William Moseley as Prince Liam and Alexandra Park as Princess Eleanor. The internationally esteemed ensemble adding anarchy in the monarchy are Merritt Patterson, Jake Maskall, Ukweli Roach, Tom Austen, Sophie Colquhoun, and Oliver Milburn. The legendary Joan Collins will also guest star as the Grand Duchess of Oxford.

The Royals premieres in the UK on Wednesday 25 March at 9pm, only on E!. Watch video footage of the stunt below: