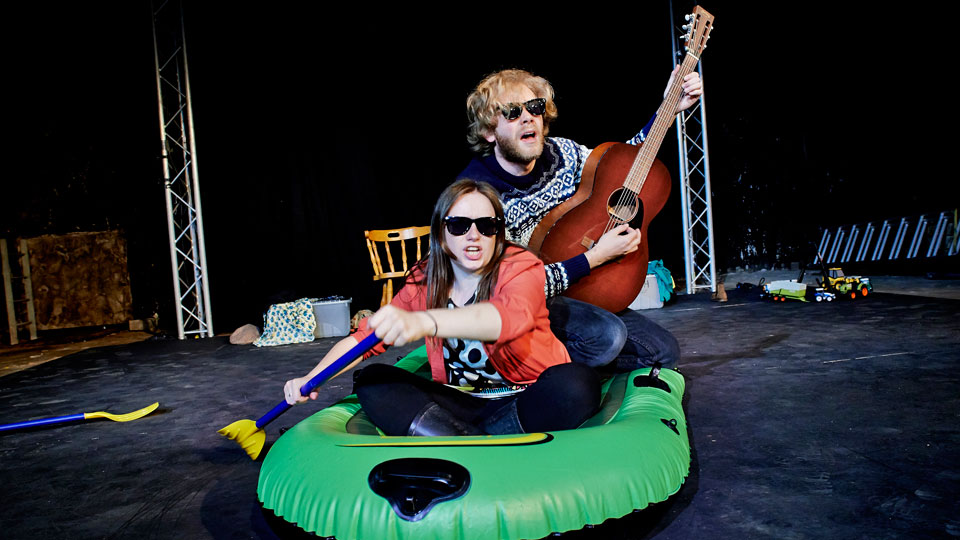 Hiraeth succeeds on its charms. No frills it may be, but it trades on its low production values, and offers a fantastically funny show, well worth checking out at the Soho Theatre this week.

The title comes from a Welsh word for nostalgia over a lost way of life, and the story details young Welsh woman Buddug leaving the family farm and generations of farming tradition for a new life in London. However, this is no linear tale: Hiraeth takes a sledgehammer to the fourth wall, and with some enjoyable self-referential touches and stabs at audience participation, unfolds with exuberance, extended metaphors and moments of anarchy.

The creatives behind Hiraeth are a talented bunch. Buddug James Jones plays herself – well, it’s her story – and whilst she does so apologetically (pointing out that she’s not a trained actor), she’s a lot of fun and is essentially the ‘straight man’ to Max Mackintosh. He plays virtually all the other parts, from Buddug’s parents to her grandmother and various boyfriends, and does so with great comic timing. It’s a self-consciously virtuoso performance, but like everything else about Hiraeth, played with tongue in cheek.

It’s impossible not to warm to this daft, somewhat surreal tale. Some of the jokes miss their targets, but there’s plenty that will have you laughing out loud. We enjoyed a touch of the non-PC, but the performers are so affable you’d have to be very thin-skinned to take offence. Behind the frantic storytelling that zooms quickly in multiple directions is a serious point about belonging, and about the difficulty in escaping a prescriptive life to create your own destiny.

As the title suggests, Hiraeth is a very Welsh piece, which includes a strong musical element, as the two performers are joined by David Grubb on violin and percussion, whilst Max plays guitar, and he and Buddug sing. The songs are original and surprisingly catchy, and you’ll be invited to sing along to one patriotic number.

Running to only just over an hour, Hiraeth is short and sweet entertainment, and the cast is great company. The originality lies not in the story itself but in its execution, and it is sure to raise more than a few laughs as you try to keep up with the dizzying story and array of colourful characters.  The Welsh cakes are tasty, too.