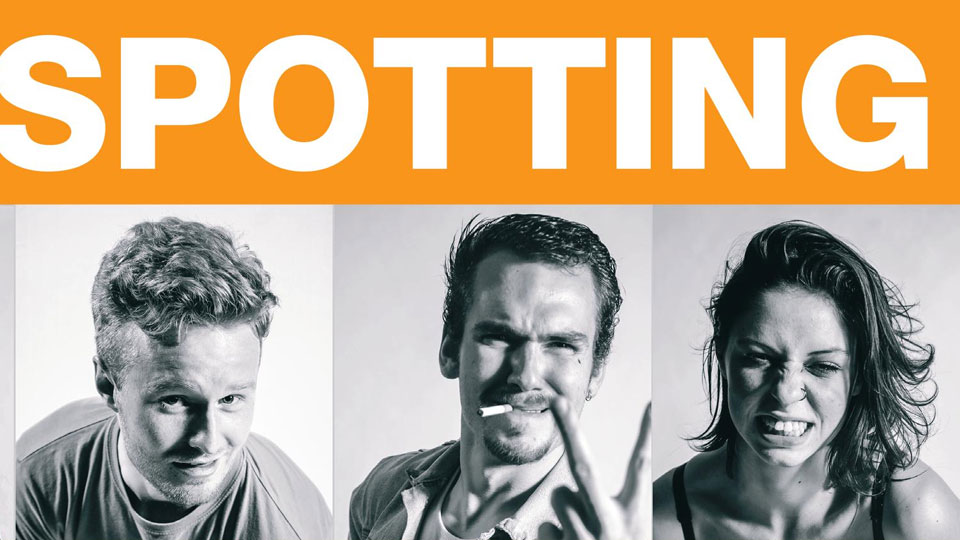 Trainspotting is the kind of theatrical experience you’ll either love or hate – but you certainly won’t forget it in a hurry. Running to just over an hour, it’s a truncated though fairly faithful adaptation of Irvine Welsh’s novel, with some characters becoming amalgamated to reduce the cast.

In the unlikely event of the story being unfamiliar, Trainspotting follows the lives of heroin addicts in Edinburgh in the late 1980s, and some of the action is told through flashback as they recall disastrous dates and friendship-defining moments. Indeed, it helps to be familiar with the book (or the film) as Trainspotting virgins may find it difficult to keep up with the episodic and non-linear story involving multiple characters that is given only just over an hour’s duration.

This production comes from the Edinburgh Fringe (there’s a neat in-joke about that) courtesy of In Your Face Theatre – a company that lives up to its name and provides provocative, intense theatre with (depending upon where you sit) a certain amount of audience participation. There’s no fourth wall here, and nor is there anything shy or apologetic about this production. The squeamish be warned: incidents involving the toilet from hell and the dirty bedclothes aren’t merely implied, but given full scatological illusion here. With depictions of heroin use and full frontal male nudity, and a scene-setting rave – this is a production that pulls no punches. Excellent design work turns the King’s Head Theatre into a squalid underworld, and there’s no bad seat in the house – every area becomes part of the story.

Trainspotting boasts an excellent cast. Any traces of the deeply-embedded big-screen actors will fade in the first few minutes, when Gavin Ross embodies everything you’d expect from Renton, and he’s the affable storyteller who leads you into the dark world of addiction and cold turkey. Greg Esplin also makes a strong impression as the noble and at first clean-cut Tommy, and the high point of the drama is Tommy’s descent. The psychotic Begbie is a gift of a part, but Chris Dennis owns it, and is suitably terrifying.

Adapting any novel for the stage is a challenge, especially one as episodic as Trainspotting. For the most part, Harry Gibson’s script works well in picking out moments of drama that hold together as a coherent snapshot of the lives of one group of fairly disparate friends. There are however, multiple characters sharing first person narration, which leaves some of the storytelling feeling fractured, especially as it covers so much ground so quickly. It might have been even stronger to have allowed Renton to tell the whole thing.

Overall, the group of actors sell this production, and make the company of junkies and psychotics oddly appealing. Chances are, if you like the original story, you’ll love the stage show. It’s bold, it’s unique, and it’s like nothing else you’ll see on stage.

See also our interview with actor and director Greg Esplin.