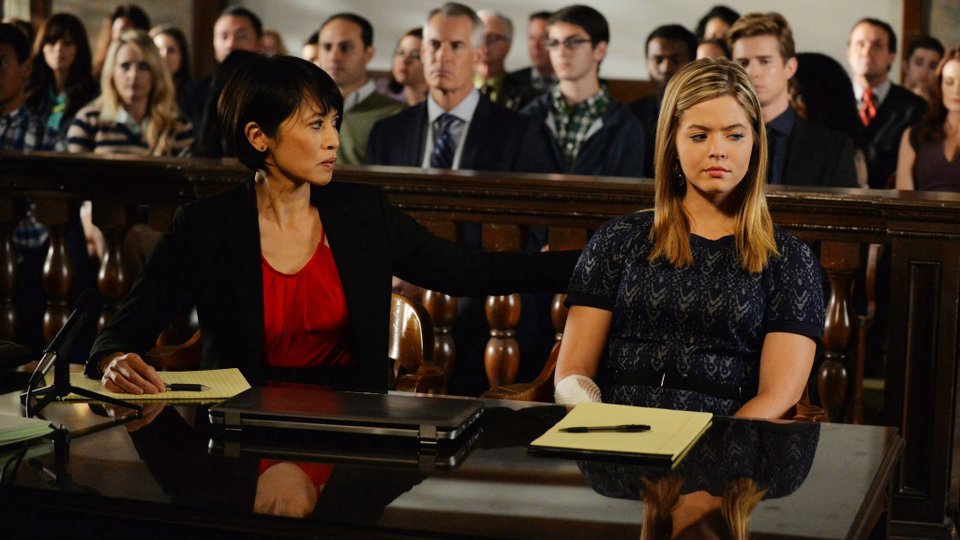 The day of Alison’s (Sasha Pieterse) trial arrived and the liars weren’t prepared for what was about to come out.

The first day of Alison’s trial arrived this week and Veronica Hastings (Lesley Fera) warned Spencer (Troian Bellisario), Aria (Lucy Hale) and Emily (Shay Mitchell) to stay away from it. Aria and Emily of course completely ignored Veronica but Spencer was told in no uncertain terms that she wasn’t allowed to go.

During the prosecution’s opening statement, it was pointed out that Alison had lied about being kidnapped and that much of what she’d told the police was fabrication aided by her ‘followers’. Aria and Emily were shocked to discover they knew about Ali’s lies and Mr DiLaurentis (Jim Abele) let his feelings be known outside the courtroom.

Spencer decided that she couldn’t stay away from the trial knowing that her name and her friends were being dragged through the mood. Arguing with Veronica, Spencer was caught leaving a note explaining her decision. At the courtroom Jason DiLaurentis (Drew Van Acker) took to the stand and changed the story he had given to the police. After rewatching the Mona being murdered on video, Jason said he was sure his sister didn’t do it. That led the prosecution to follow a different path as they suggested perhaps it could be Hanna (Ashley Benson) on the video instead? It was then suggested that Ashley Marin (Laura Leighton) slept with Jason to get him to change his story and protect Hanna. He denied it but the public reveal of his indiscretion with Ashley shocked the liars and of course Ashley who was sat in the audience.

Following the public announcement of her fling with Jason, Ashley had a heart-to-heart with Ted (Edward Kerr). He ignored his phone after being inundated with calls and messages about the revelation and Ashley suggested that he could walk away. Is this really the end for Ashley and Ted?

Having gotten nowhere with the number Emily found in Varjak’s hideout, Caleb (Tyler Blackburn) began to spiral struggling to cope with Hanna’s imprisonment. Using a burner phone, the group sent a message to the phone and were surprised when the number called them back on Aria’s phone. Caleb snatched the phone from Aria’s hand and upon answering it heard an Edith Piaf song playing. He recorded the audio and played it to Hanna down the phone. She explained that it was a song Mona used to play and urged her friends to go to Mona’s house and search her room for hidden clues.

Aria and Emily went to the house first but there was no answer. They returned later with Spencer in tow and heard the same Piaf song being played. They looked up and saw Mona’s window open and Emily realised the door was unlocked. They rushed up to Mona’s room to find it had been ransacked and discovered a note from A suggesting the clues had to be taken. Realising A could be trying to trick them, the girls tried to think like Mona and Spencer found a cryptic message hidden in the back of a mirror on Mona’s dresser. As the girls left the house, we saw that someone had broken into Mona’s house using the ice pick from Boo Boo’s Ice Cream factory and Andrew (Brandon W. Jones) was watching the liars as they left the house.

Later at the Brew Emily used the installation Jonny (Will Bradley) created and listened to the secrets of the customers. After a few trivial messages, Emily was shocked to hear the Piaf song once again.

The episode draw to a close with A shredding all of the evidence about Varjak and the Boo Boo implement being processed and committed to evidence.

Hanna and Alison were reunited in prison this week and took the opportunity to have a chat whilst folding laundry. Hanna quizzed Ali about the ads the girls found in the paper that she had been using to communicate with A. Ali explained that she didn’t think it was A and believed that Mona was behind it.

We’re two episodes away from the Big A reveal and we’re fairly sure this one is a red herring. Andrew was made out to be a suspect in the latest episode with his creepy spying and also his frank conversation with Aria where he suggested that the world was better off without Mona in it. Later he apologised to Aria and showed his desire to carry on their budding romance. Is Andrew really A? We doubt it.

Tune in to ABC at 8/7c Tuesday in the US and Netflix Wednesday in the UK for the next episode. Preview I’m a Good Girl, I Am below: