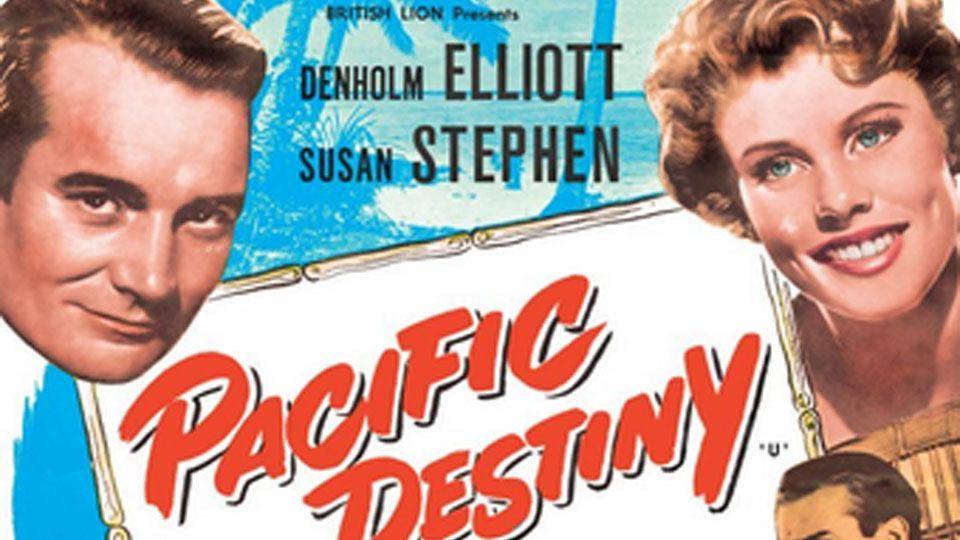 Pacific Destiny is a 1956 British movie which stars Denholm Elliott (Indiana Jones, A Room With AView) as Arthur Grimble, a British colonial officer assigned to govern some islands in the South Pacific in the 1920s. It follows the traditional fish out of water storyline, with Elliott at first hapless and hopeless as he struggles to adjust to a completely different way of life. His boss, played by the wonderful Michael Hordern, is keen to see him fail, and his wife Olivia (Susan Stephen) is supportive but quickly tires of propping up Grimble’s battered confidence and ego. Naturally, as time progresses, Grimble falls in love with the island and with the way of life, and slowly wins everybody’s respect.

The movie is based on a true story, and on Arthur Grimble’s memoirs of his time as a commissioner. When the movie was made, Gilbert and Ellice Islands (where Pacific Destiny is set) would still be a British colony for another two decades. Retrospectively though, we can’t help but feel a little awkward about tales of British derring-do as a foreign power occupying other lands, and as such the film hasn’t weathered well (even the word “destiny” in the title is loaded). Nevertheless, Pacific Destiny is surprising for two reasons: it by and large avoids a patronising depiction of the islanders, and it’s also not as sentimental as it might have been.

The major plus in the film’s favour is three of the leading actors. Denholm Elliott never gave a poor performance, and he is perfect in the part of Arthur Grimble: a decent chap who sometimes has trouble keeping his upper lip stiff. Michael Hordern was one of Britain’s most entertaining character actors, and he’s a lot of fun in the movie, and at the heart of most of the comedic elements. Look out also for a young Gordon Jackson (The Great Escape, The Professionals) in his familiar guise as a fearless Scot. Unusually for films of the period, the islanders are developed into characters in their own right too, which makes a conclusion in which rival factions square up for conflict all the more credible.

A DVD release suits the movie, as the rich colours and high contrast of the film stock preclude high definition as the colours tend to bleed out. Pacific Destiny is quaint, though fairly amusing, and sometimes unintentionally comic (Denholm Elliott’s battle with an inflatable shark wouldn’t be out of place in a Monty Python film); yet it has a good heart, even if it’s one we can no longer relate to.

Pacific Destiny is released as part of Network’s The British Film collection.

Greg Jamesonhttp://www.gregoryjameson.com
Book editor, with an interest in cult TV.
Previous article
Star Trek heading to The Royal Albert Hall
Next article
Secret Cinema to host The Empire Strikes Back

‘They Who Dare’ Blu-ray review