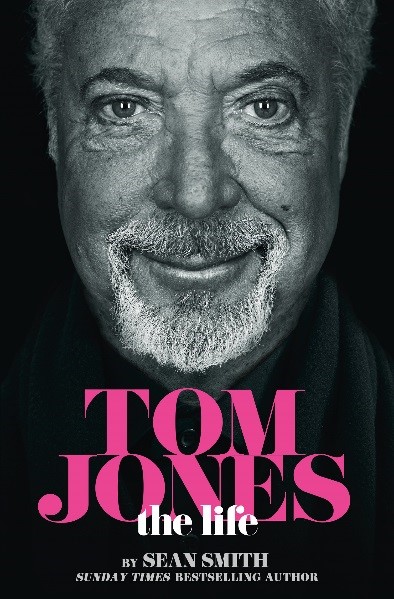 Tom Jones – The Life, is written by the bestselling author, Sean Smith. He is the UK’s leading celebrity biographer. He has written numerous bestselling books about Robbie Williams, Kate Middleton, Kylie Minogue, Gary Barlow and Britney Spears, to name a few. Therefore, who better to trust to write an accurate view of the life of Tom Jones, than Sean Smith.

Tom Jones. A man who needs no introduction. With a career that has spanned decades, the man shows no sign of slowing down. As one of the current judges on the popular BBC.1 show, The Voice, Tom’s expertise and experience are second to none. For those of us who are Welsh, we’re probably a little bit more in love with him that the rest of the world, to us he is our legend and hero. He is a man from humble beginnings and a man who has never forgotten his roots.

This book covers a wide range of topics, including his childhood upbringing, where we learn that he is actually from Treforest and not Pontypridd, as is widely assumed and widely written about. We learn about his legendary romances and reported flings with several women during the height of his career, yet the woman who has remained a constant throughout his life, since he was a teenager is his beloved wife, Linda. We learn about his Vegas years, where he headlined shows and rubbed shoulders with the biggest superstars who have ever graced the world stage and who also had headline shows in Vegas at the time, including the like of Elvis Priestly, Frank Sinatra and Liberace. Wouldn’t you just love to have been invited to have dinner with those guys? One can only imagine what it must have been like.

We hear about his early jobs, including working at a glove factory and how he had to hide the fact that he was married with a son when he first burst on to the music scene and how he had to pretend that he was a single man in order to keep the female fans interested. We hear stories from people who know his the best and this gives us further insight to the man that is admired by so many people.

We also learn about the man behind the glittering career and more about his generous personality, his home life and his family life, which is so important to him. What also comes across strongly in this book is that the chapters always return back to the thing that made him a multi-millionaire, gained him an army of fans and made him sell millions and millions of records – his amazing voice. His voice is what has taken him from Treforest, to every corner of the world and has given him a career and lifestyle that can be both envied and admired by everyone. Who knew that the infamous knickers that were constantly thrown at him during his career was seen as a distraction to him, and he got irritated that the press decided to write more about that at times, rather than focus on his voice, performance and show, who knew?

Reading this book will make anyone want to look back on his back catalogue of albums and revisit songs that may have been lurking in your CD collection for a while. No one can get away from the likes of Delilah during the 6 nations rugby – a song that is sung with passion during the Wales games. It’s also easy to forget that the Green, Green Grass of Home was actually written about a man facing death whilst serving on death row. Anyone could be forgiven for thinking that the song was written about Tom thinking back to his humble beginnings. Also, after reading the book, we find out what Tom really thinks of What’s New Pussycat?

The book also covers the managers that Tom has had in his career and how they have shaped his career. From his long-term first manager Gordon Mills, who was his manager up until his untimely death, to his son Mark, who took over following the death of Gordon Mills. Mark helped to bring him to a younger audience and helped him to have one of the most successful albums of his career with his duets inspired album – Reload.

This book is very well written, informative, covers several tales and funny interaction and the research that has gone in to the book is to be applauded. We loved reading it and we kept learning more and more as the book went on and the pages quickly turned. Before we knew it, we were nearing the end of the book. We have loved reading about his early days and his early visits to London in order to try and ‘make it’ in the music industry. Also, we recommend that you check out his back catalogue of work, there are so many gems there. Tom Jones – ‘The Voice’, we salute you! This book is a must read for any Tom Jones fan.