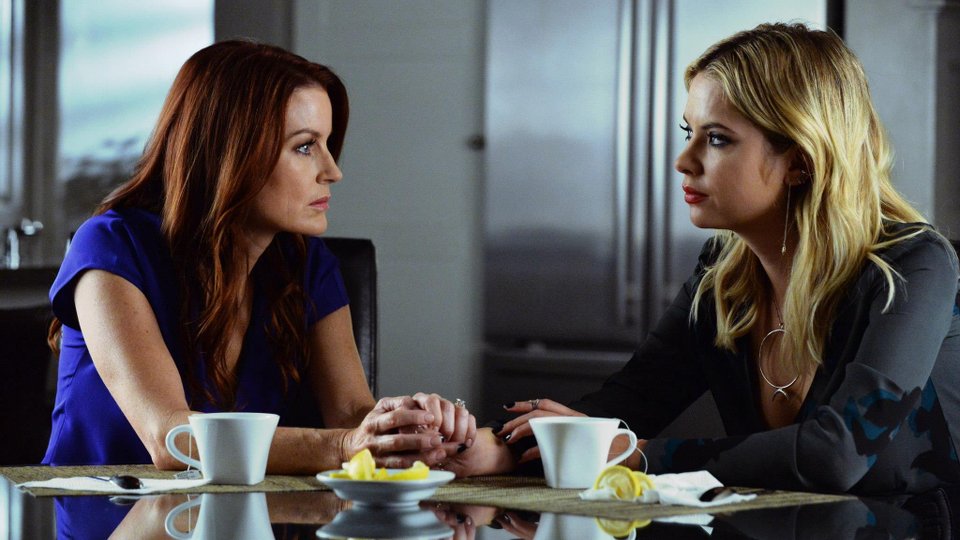 Alison (Sasha Pieterse) had a big decision to make in this week’s episode of Pretty Little Liars and one of her friends looked to be going down regardless of what she decided.

If you haven’t seen this week’s Pretty Little Liars and don’t want any spoilers then we suggest you stop reading now. If you have seen it and want to relive all of the action then keep reading.

Alison DiLaurentis has done some despicable things in her time but mulling over a plea that would send Hanna (Ashley Benson) to prison along with her is one of the most shocking. The two frenemies seemed to be starting over after Hanna’s recent jail visit but Ali’s lawyer suggested that telling the truth is only going to result in Ali heading to prison for life without parole.

As she mulled over the decision, A started to target her in prison and following a nasty incident in the laundry room and someone leaving ‘Take the plea’ scrawled on her wall, Alison decided that taking the plea was the best thing to do provided she could go to a safer prison. Veronica Hastings (Lesley Fera) stepped in and told Ali that sending Hanna to prison was wrong and asked what had happened to her determination to clear her name.

Ali decided not to take the plea but still saw Hanna being hauled into prison to join her behind bars.

Poor Hanna. Looking like Ali hasn’t served her well over the years and this week just simply being friends with her has put her freedom in jeopardy. As she was leaving the house for school, Hanna overheard Veronica telling Ashley (Laura Leighton) about Ali’s plea deal. Panicking she headed over to Caleb’s (Tyler Blackburn) who promised to speak to Toby (Keegan Allen) and find out what he knows.

It transpired that Tanner (Roma Maffia) had a warrant for Hanna’s arrest and Ashley forced her to tell her (some of) the truth about what was going on. Caleb convinced Hanna to go to the police and tell them all about A to get herself off the hook. As she waited to see Tanner, A hacked into her phone and deleted all of the threatening messages leaving her with no evidence.

Hanna was then arrested and taken to prison, and it turned out the evidence Tanner has is Hanna’s blood on Mona’s (Janel Parrish) clothes. How did that get there we wonder?

The wrong side of the law

Emily (Shay Mitchell) convinced Aria (Lucy Hale) that they needed Ezra’s (Ian Harding) help tracking down Varjak this week. Initially brushing it off and letting Emily go to Ezra on her own, Aria finally decided to be a team player and met them after Ezra confronted Mona’s ‘lawyer’. It’s looking very likely that the lawyer was hired by A to plant fake clues and throw the liars off course.

After the meeting the gang tailed the lawyer to a remote house. Emily got through the gates but Aria and Ezra were stuck outside. Doing her best impression of a spy Emily peered through the window and saw the lawyer taking money out of a safe along with a gun. She also found a receipt in the bin with the name Varjak on it and a phone number. After nearly being rumbled Emily made it back to Aria and Ezra and shared what she’d found with them. Can it help Hanna get out of jail? Emily dialled the number but who’s on the other end?

Spencer (Troian Bellisario) spent the episode in London forgetting her cares, bonding with Melissa (Torrey DeVitto) and getting cosy with Colin (Oliver Kieran Jones). After a chat with Melissa, Spencer decided to stay in London for an interview at St. Andrews and agreed to a night out with Colin who had tickets to see a modern version of Hamlet. The two got cosy in the pub after the show, which they both hated, and after returning back to the flat soaking wet thanks to some serious rain, they shared a kiss. The next morning Spencer found out that both Melissa and her mother had lied about her interview to keep her in London and away from Rosewood. With the news that Hanna had been arrested, Spencer was determined to get home and help clear her name.

The end of an Ezria

The moment that Ezria shippers have been dreading happened this week as Aria called time on her relationship with Ezra. Following their talk where Ezra said he felt like Aria missed out on a lot of growing up because of their relationship, Aria decided it was best that she was single when she went to college. Rather than prolong the agony, Ezra suggested they split now but try to stay in each other’s lives. Will Aria come clean about her kiss with Andrew (Brandon W. Jones) and his subsequent love note in her locker? Well at least Emily knows about it now.

Tune in to ABC Family Tuesdays at 8/7c in the US and Netflix Wednesdays in the UK to see Pretty Little Liars. Preview the next episode, The Melody Lingers On, below: