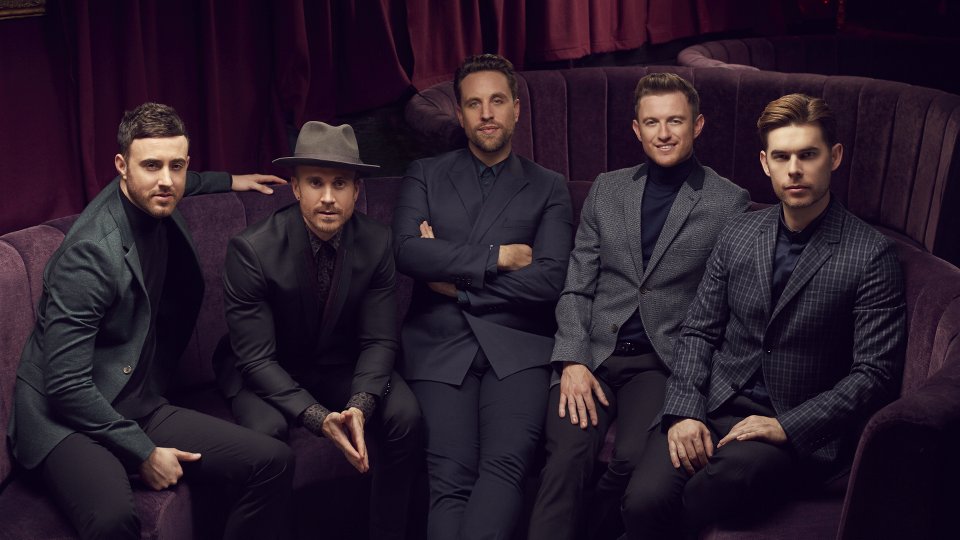 Vocal harmony group The Overtones are on the verge of releasing their fourth studio album Sweet Soul Music.

The album is the follow-up to 2013 smash Saturday Night at the Movies and sees the guys – Lachie Chapman, Timmy Matley, Mike Crawshaw, Mark Franks and Darren Everest – wrapping their trademark harmonies around a collection of soul classics with a few originals thrown in for good measure. The album’s first single Something Good is already dominating radio and causing a lot of buzz.

We caught up with the guys to find out more about the new album, talk about their songwriting talents, and get all the scoop on their upcoming theatre tour.

Your new album Sweet Soul Music is out on Monday. What’s it all about?

Lachie: It’s a celebration of a lot of the classics that people will know and love. We’ve put our interpretation on these songs. We’re on album four now so we want to give our fans and anyone who buys our CD and listens through the chance to hear a slightly new style, which is something we do on every album. Soul music is right after the doo-wop period. You’re looking at songs like Heard It Through The Grapevine, Give Me Just a Little More Time and Rainy Night in Georgia. We could almost have shuffled these songs onto any album we made because they are classics from decades ago but this way we got to make an album dedicated to a lovely era.

We were in the studio for months on this album because we actually started recording another album. We got probably more than half way through and we realised it just wasn’t sticking. We had to have some serious meetings with Warner Brothers, our record label, and management and go back to the drawing board. I think it’s our most beautiful album and it looks like an album from the era. I’m really proud of the job we’ve done and I’m just really excited to get it out onto the airwaves and get out touring it.

You mentioned that you were half way through recording a different album. At what point did you decide to record a soul music themed album?

L: Saturday Night at the Movies was a lovely, lovely surprise for us because it was thematic and it had a thread going through it right through to the last track. What we were initially doing in the studio we realised didn’t have a thread running through it. It was a lovely collection of songs but it wasn’t a celebration of being able to listen from track 1 to track 13 with a common theme. We did go back to the drawing board and we had a lot of discussions. A lot of our favourite singers have been soul singers. My idol of all-time is Aretha Franklin and we looked at Otis Redding and Al Green, these singers whose songs we all love, and we thought ‘well soul it is’ with a sweet bent because we’re The Overtones. Sweet Soul Music.

Mike: It was really important to us this time to really approach the harmonies and backing vocals in the way the old school groups used to do back in the day. Normally nowadays to record backing vocals, you’d each go in separately and record your part over and over 5 or 6 times. They then basically layer all of the harmonies over the top of each other. This time we got in the studio together around five mics and what we were able to do as a result was really get into the feel and the light and shade, and the energy of the harmonies and the vocals. It was one of those special moments on this album where when you listen to it, you hear us all singing at the same time, as you would on the stage, singing all these classics.

You can really hear your individual voices, more so than ever, on this record. Is that something you wanted your fans to hear this time round?

Darren: I think so yeah. As the boys said we recorded it in a different way so I think that’s the reason why sometimes you can hear different voices coming through. It’s a really, really enjoyable process and we challenged ourselves intentionally but I think we’ve risen to that challenge. We really do believe it when we say this our best album yet because we really pushed the boat out. We just hope that the fans see that that the hard work we put in was worth it.

There are three original tracks on this album. Our favourite is the beautiful Giving Me Soul. How do you get them to work so effortlessly with the classics you’ve covered? They never sound out of place on the record…

Timmy: You know what, that’s a massive compliment! It’s always the same for every album; we write a bunch of songs, sit down and listen to them through. Our gut feeling is always the same about the originals and everyone will agree. The ones we all like stick out like a sore thumb. It’s been a really lovely process recording them and I’m actually really chuffed you said that. It’s a really lovely compliment, especially Giving Me Soul, it’s lovely to hear Lachie singing an original and it’s a beautiful job he’s done.

We put up a streaming sampler that’s got little clips on YouTube and the majority of the fans are naturally going towards some of the classics but they’re loving our originals – Moving On, Giving Me Soul and Something Good, which is getting a lot of radio play on Radio 2 at the moment. For us and the type of band we are, we’re so thankful to have that support. We’re talking at the moment about a publishing deal and hopefully you’ll hear other artists singing The Overtones’ songs. We’ve got a few in the locker now from the last few years and I suppose people don’t know that we work really hard on the originals and that we’re songwriters as well. It’s really lovely to get to talk about that.

Do you foresee a point in the future where you might release an album featuring only original material?

Mark: For us I think we have a nice balance with the classics we cover and the originals that we write. I think when people come to see us on tour they want to sing along to these old classics. We’re keen budding songwriters as well so to get to write 3 or 4 original songs is great for us. I like the balance we’ve got there.

Timmy: Can I just bring it back to our first album? It’s really lovely that you’re crediting our originals. When we recorded our first album it was supposed to be all covers but we put Gamblin’ Man on the table and it opened up this new lane way for us to write more originals and having songs that we’ve written on the radio. We’re the driving force behind that but we definitely know there’s a good balance. Michael Buble is a great artist that gets that balance singing great Frank Sinatra songs from back in the era but gets to sing his own material as well. I think he does it well and I’m glad to hear you think that we do it well.

Sam Bailey features on the album on River Deep, Mountain High. How did that come about?

Mark: We performed quite a few times on The Xtra Factor and the year that Sam Bailey won we performed on there after the final. We got to have a chat with her and it turned out she was a big Overtones fan. We kept in touch ever since then and that’s how it started with her.

What was it like working with Sam in the studio?

Mike: We wanted to prepare the song as best we could so when she came in she only had to worry about the feel of the song we’d made and then sing around it. It was important to us to get this really organic feel with the lead vocals. There was this wonderful moment where Lachie and Sam were in the studio at the same time singing to each other and looking at each other, bouncing off the energy…

Lachie: Screeching at each other basically… (laughs)

Mike: But as a result the sound these two made was really special. When you stick it on in the car, or wherever, you hear the energy and the buzz between the two.

Lachie: She did one take and basically nailed it. She did another couple of takes but she didn’t need to. She came straight in and went bang and it was job done. She’s such a lovely, lovely human being.

You’re going to be hitting the road for a new tour in June. What can fans expect this time?

Timmy: Let’s just say that we’re known for our dance moves and soul music requires a bit more bump and grind. I think you’ll see The Overtones turn up the sex factor a little bit on this tour. We can decide what songs not to do on tour if I’m honest. The tour is going to be a fun-filled night as always and we’re always building on our live audience. We just want to give people the best night possible and get everyone to come down. We understand that our fans work really hard and we want them to come out at night to these beautiful theatres and forget their cares and worries, and just dance the night away with us – let their hair down!

What else are you packing into this year?

Lachie: We’re taking it week-by-week and day-by-day at the moment. It’s getting to the point where it’s about to be frantic very quickly with the album coming out. We’ll be doing TV shows, we’ve done some pre-records for radio shows, we’ve got a radio tour coming up then there’s the tour itself. There’ll probably be some more studio time with some more writing then maybe some touring in Europe. Then there’s a lot of summer shows, a lot of gigs and festivals. Plenty of coffee!