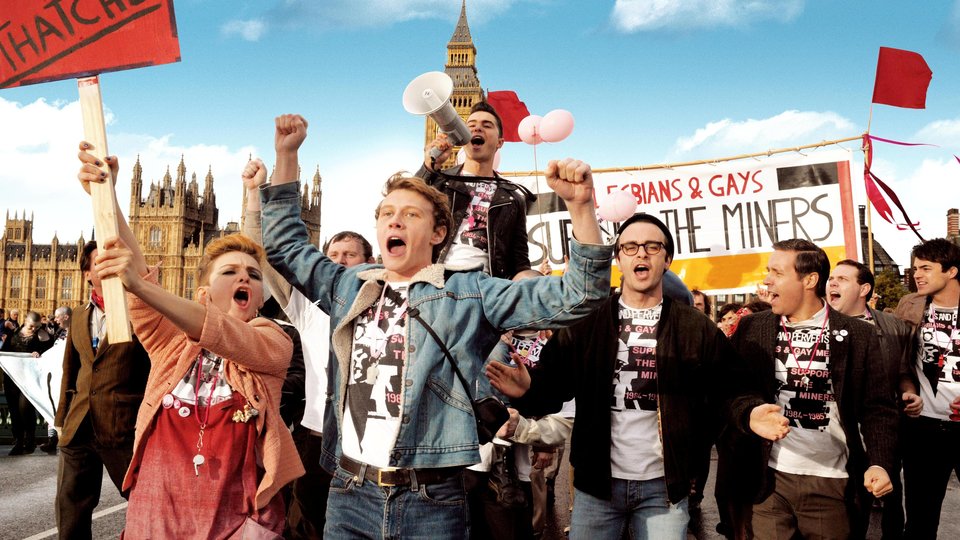 In the summer of 1984 a political power struggle is taking place between Margaret Thatcher’s government and the National Union of Mineworkers, forcing the NUM on strike. Mike (Ben Schnetzer) is a young Gay man living in London who sees the similarities faced by his cause and those of the miners. He forms a small group of activists named Lesbians and Gays Support the Miners (LGSM) to raise money to support them, but the Union seems embarrassed to receive their help. Mike is not deterred and instead decides to bypass the Union and go directly to the miners themselves. The LGSM randomly pick a mining village in Wales and begin to collect money for their plight. This sets a chain of events in motion that brings two opposite communities together and unites them in their joint struggles against hardship, the government, the police and bigoted public attitudes.

Based on the true story of the LGSM, the Queer Palm award winner at last year’s Cannes Festival is finally out on DVD. Pride is without doubt that next big British movie – a film with a truly captivating story of the struggles, oppression, friendship and love that arose from one of the UK’s darkest periods of recent history.

At its heart, Pride is a human interest story. It shines a telling light onto the political and social landscapes of the 80s and the adversities both groups faced. This is a hugely important movie as it will give younger audiences a real glimpse at just how volatile and uncertain these times were. It shows how a small group of like-minded individuals came together to bridge gaps, forge lasting friendships and really change attitudes.

Being based on real-life events gives Pride a true sense of identity. Granted, there are situations and stories that have been manufactured for the sake of the films narrative, but these only compliment the outlining story. It also has to be said that although this is a story with serious undertones, it’s also hugely entertaining and very, very funny. All of the characters are multi-dimensional and never fall into cliché with an ensemble cast that are utterly superb.

Pride reads like a ‘who’s who’ of British cinema with Dominic West, Andrew Scott and George MacKay leading the line well. Up and coming stars of the screen like Faye Marsay and Freddie Fox also shine alongside the likes of Nia Gwynne, Joseph Gilgun and Jessica Gunning. The film is told through the eyes of Mike – played brilliantly by American actor Ben Schnetzer. Having seriously impressed in The Book Thief last year, Schnetzer is certainly going to be that next big thing, with his performance in Pride marking out a bright future for him.

Everyone is excellent but special mention has to go to the trio of Paddy Considine, Bill Nighy and Imelda Staunton. All three are sensational here with Nighy and Staunton adding authority and real screen-gravitas to the story. Considine has a very important role too, and one that really unites the film (just like his character helps to unite the communities).

Pride really is a gem of a film that showcases everything that’s right with the British film industry. It’s an affecting, heartfelt and deeply sincere comedy-drama with a strong emphasis on good characterisation and an involving story that’s hard not to fall in love with. As a shining example of what can be achieved with mutual respect, passion and solidarity, Pride the film should be infinitely proud of the mark it has made on our cinematic landscape. Hopefully it will go some way to educate those who didn’t know about this pivotal time in history and also help change attitudes moving forward.