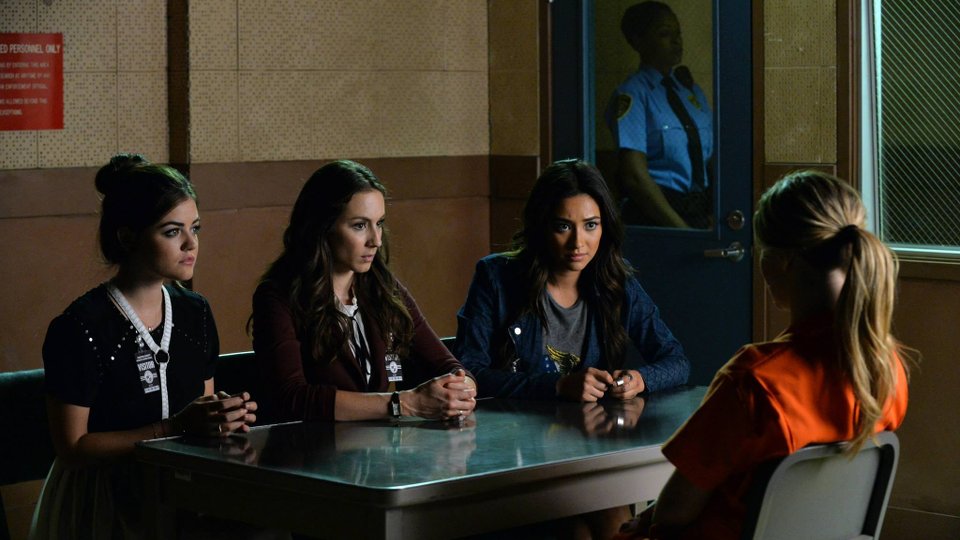 The liars finally went to visit Alison (Sasha Pieterse) in prison this week and Spencer (Troian Bellisario) discovered that leaving the country doesn’t mean you can get away from A.

If you haven’t seen this week’s episode of Pretty Little Liars and don’t want any spoilers, we suggest you stop reading now. If you have seen it and want to relive all of the action then keep reading.

Aria (Lucy Hale), Spencer and Emily (Shay Mitchell) visited Alison in prison to kick off the episode. The girls told her about Mona’s (Janel Parrish) plan and explained that Mike (Cody Allen Christian) had only just realised she was actually dead. Aria begged Ali not to tell her lawyer about Mike until she had chance to find another way to prove her innocence. The lack of Hanna at the visit upset Ali but the liars made excuses for their friend’s absence.

Back in her jail cell Ali found a tin under her bed with a note from A and a doll that looked like her inside it. During laundry time, Ali wrote Mona’s name in dust on top of a machine and when she went back to it later A had added to giving her a fright.

Later in the episode Ali received visits from Mrs Hastings (Lesley Fera) and Hanna (Ashley Benson). The first visit was Mrs Hastings trying to find out why Spencer visited Ali and resulted in Ali asking her to be her lawyer and help her prove her innocence. The second visit saw Hanna and Ali start to pave a way to reconciliation.

Aria was left in a state of panic fearing that Mike could be in trouble for withholding information about Mona’s murder. First she turned to Mrs Hastings for advice and discovered that Mike could be charged if anyone found out what he knew. This led Aria to look for other ways to help Ali prove her innocence and she eventually realised that finding A would be the best way.

Roping Hanna in to help her, Aria started tracking Cyrus (Jake Weary) and found out he was in hospital. The two girls went to visit him and discovered he was in the Burns Unit. Posing as his cousins, Aria and Hanna got a few minutes to talk to him and he scribbled something down on a piece of paper for him. Aria initially thought it as ‘carjacked’ but Hanna noticed the ‘c’ looked like a ‘v’ and made the connection to Ali’s obsession with Breakfast at Tiffany’s and wondered if he meant Varjak, the lead male character in the movie. Who is Varjak and could he hold the answer to the mystery of A?

There will be blood…

Spencer discovered just how serious her mum was about getting her out of Rosewood when she was handed a plane ticket to London for an interview at Oxford. Turns out Mrs Hastings asked Wren (Julian Morris) for a favour and arranged for Spencer to stay with him and Melissa (Torrey DeVitto). Upon her arrival Spencer was greeted by their flatmate Colin (Ollie Kieran-Jones) as Wren and Melissa were away in Kent.

During her interview, things were looking good for Spencer until the interviewer spotted blood leaking out of her bag. Shocked Spencer looked inside to find a smashed vial of blood planted by A and she made a quick exit from the interview. Arriving back at the flat, she got a text from A promising more blood in her ‘carry-on’ prompting Spencer to try and change her flight.

Towards the end of the episode Mrs Hastings saw something in Ali’s file that prompted her to urgently ring Spencer and tell her not to come home.

Aria and Andrew (Brandon W. Jones) look set to become Rosewood’s hottest new couple and this week saw them share their first kiss. It’s been pretty obvious that this is the way the storyline is going, especially with Aria and Ezra (Ian Harding) on the outs. After missing a study session with Andrew, Aria agrees to go to the cinema with him the next night. Before they got the chance to go out, Andrew rescued Aria from a near fatal injury (which was meant for Mike) after she climbed on Mike’s gym equipment to retrieve his schedule from a dartboard. As she climbed onto the equipment, it collapsed thanks to A’s meddling at the end of the last episode. As Andrew helped Aria, the two stared into each other’s eyes and shared a kiss.

Emily spent a lot of the episode perfecting her dance routine in readiness for the pageant but she managed to get pulled back into Talia’s (Miranda Rae Mayo) drama too. Her on/off girlfriend quit her job at the Brew and broke up with her husband. Upset and with nowhere to go, Talia revealed all to Emily who offered to let her stay at her house for a while. Later in the episode Talia stopped by to see Emily whilst she was rehearsing and the two shared an emotional moment when Talia broke down.

That moment was short-lived when the pageant administrator stopped by to tell Emily she should drop out due to her ‘morals’. Initially thinking she was referring to her sexuality, Emily hit back but it turns out it’s the Alison connection that is making the sponsors worry. Talia decided to step up for Emily and vaguely threatened the woman asking her to donate to Emily’s education if she can’t participate in the pageant.

Ashley Marin (Laura Leighton) may have no luck with jobs at the moment but it looks like her love life is turning around. Following her (perfectly understandable) indiscretion with Jason DiLaurentis (Drew Van Acker), Ashley finally reconciled with Ted (Edward Kerr) and the two are now engaged. Hanna’s non-plussed reaction was pretty surprising and it seems she’s now worried that Ted let her mum stew for too long before making his decision.

Tune in to ABC Family Tuesday at 8/7c in the US and Netflix Wednesday in the UK to see the next episode. Preview the next episode of the season, To Plea or Not to Plea, below: