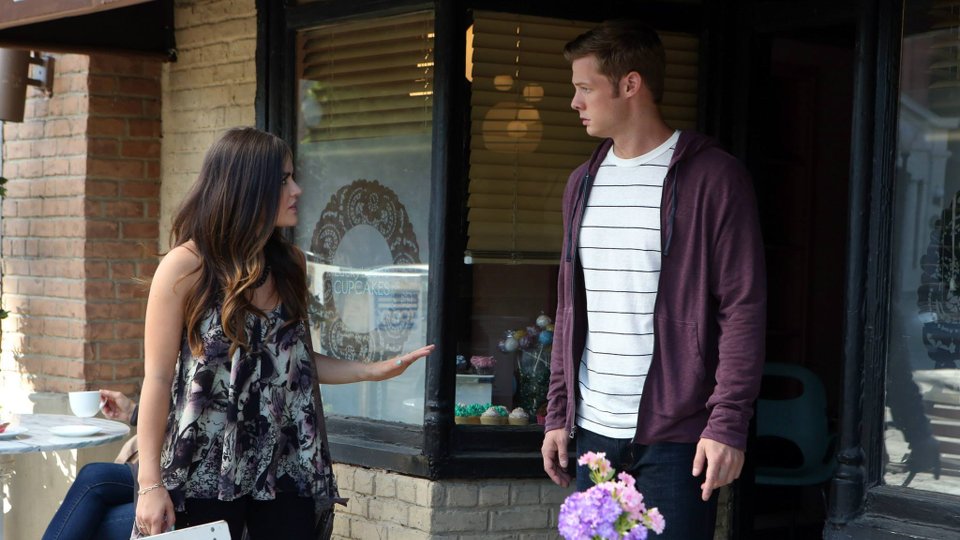 Pretty Little Liars served up a heck of a big reveal in this week’s episode shedding a little light on the events leading up to Mona’s (Janel Parrish) death.

If you haven’t seen the latest episode of Pretty Little Liars and don’t want any spoilers then we suggest you stop reading now. If you have seen it and want to relive all of the action keep reading.

Mike (Cody Allen Christian) got more mysterious this week as the liars tried to find out what he was up to following his strange behaviour last week. The episode started off with Aria (Lucy Hale), Spencer (Troian Bellisario), Hanna (Ashley Benson) and Emily (Shay Mitchell) searching Mike’s room. They found a necklace that Spencer identified as a Morse code necklace she’d seen for sale on TV that translated to ‘I’m with you’.

After the girls left, Aria had another study session with Andrew (Brandon W. Jones) where she asked him to keep an eye on Mike. During the session Mike arrived home and promptly shouted at Aria for going through his room before flipping over a table (for dramatic effect). Andrew did as promised and followed Mike into the woods behind Mona’s house where the young Montgomery hid something in a tree.

Andrew told Aria what he saw and explained he’s tried to retrieve the item but heard someone in the woods so decided to flee instead of getting caught. This sent Aria searching in the woods herself that night and she found the package Mike had hidden. Opening it she discovered a vial of blood and as she climbed down the tree Mike was waiting and confronted her. Spooked, Aria dropped the vial onto the floor smashing it and she got in her car to drive away.

When she returned home later, Mike arrived seconds later and decided it was time to fess up. The vial of blood belonged to Mona and she had given it to Mike before her death. Mike revealed that he had rowed with Mona nights before her death after finding out she was in league with A to put Alison (Sasha Pieterse) in prison. The plan was to stage her murder by splashing Mona’s blood around her house, framing Alison for it. Mona had been taking blood samples and storing them in a secret fridge disguised as a computer in her room (where can we get one of those?). The plan was for Mona to fake her death, disappear, Alison be put in prison, then Mona return as a hero for taking Ali down. She gave Mike her blood as a promise to meet him after her disappearance but she never showed leading Mike to think she was killed by someone else before she could carry her plan out.

As if that wasn’t enough of a reveal for one episode, Mike also told Aria that there’s no way the murderer could have been Alison because Cyrus took her away from Rosewood on the day it happened. He had been visiting her in prison to find out what she knew about A and to find out the truth about Mona. It looks like Alison is innocent doesn’t it? Aria relayed the news to her friends leaving them with a dilemma; do they tell the police what they know or let Ali go down for something she didn’t do? Is anyone else thinking that Mona might still be alive?

Looks like A has something in store for Mike too as he/she was seen in Mike’s room messing with his weights and wielding a spanner.

The art of stealing

Jonny (Will Bradley) has been both a liberating and terrible influence on Spencer since he turned up in Rosewood. The Hastings’ barn lodger has stirred up a whole load of feelings in Spencer and dragged her into his web of crime-related activity. Following last week’s vandalism spree at Hollis, Spencer and Jonny were surprised to find their handiwork displayed in a Rosewood art gallery. Deciding that they should have their work back, the dynamic duo broke into the art gallery and stole it but Jonny set off an alarm alerting the police. Of course it was Toby (Keegan Allen) who turned up and found Spencer and Jonny at a gas station. He arrested Jonny and told Spencer to ‘walk away’ as Tanner’s (Roma Maffia) eye was on her.

Spencer’s mom bailed Jonny out of prison and told him to pack up his things and leave their barn with immediate effect. Spencer was upset with her mother’s decision and before Jonny left he kissed her. Does Spencer have feelings for him and will she tell Toby what happened?

Hands up who thought Hanna entering a beauty pageant was a terrible idea? Yeah we thought so. The desperate liar discovered that her evil step-sister Kate (Natalie Hall) had signed up for the pageant too and put all of her energies into working on the talent section of the competition. With a coach on board, Hanna enlisted Emily to help her with a dance routine. Unfortunately when she performed it for her coach (and did some seriously off-the-script ad-libbing) she received a not quite what she expected response along the lines of ‘you’re not pageant material’.

After storming out of the room the coach then told Emily she could win the pageant, which Hanna overheard. After fleeing rehearsals, Emily tracked Hanna down at home and told her she would enter the pageant and win the money for her. The girls also discovered that Kate didn’t sign up for the pageant and it was A who put her name down to upset Hanna.

Last week Emily thought that Talia (Miranda Rae Mayo) was being honest with her when she discovered her new love interest was married. Talia brushed it off as a platonic marriage and told Emily her husband knew she was a lesbian. Well turns out that was a load of old rubbish as Talia’s husband Eric (Matt Marquez) turned up in the Brew and told Emily that his wife was experimenting but he knew she’d always be with him. Emily did the right thing and broke off her relationship with Talia telling her she was nobody’s experiment. You go girl!

Tune in to ABC Family at 8/7c Tuesdays in the US and Netflix on Wednesdays in the UK. Preview the next episode of the season Bloody Hell below: