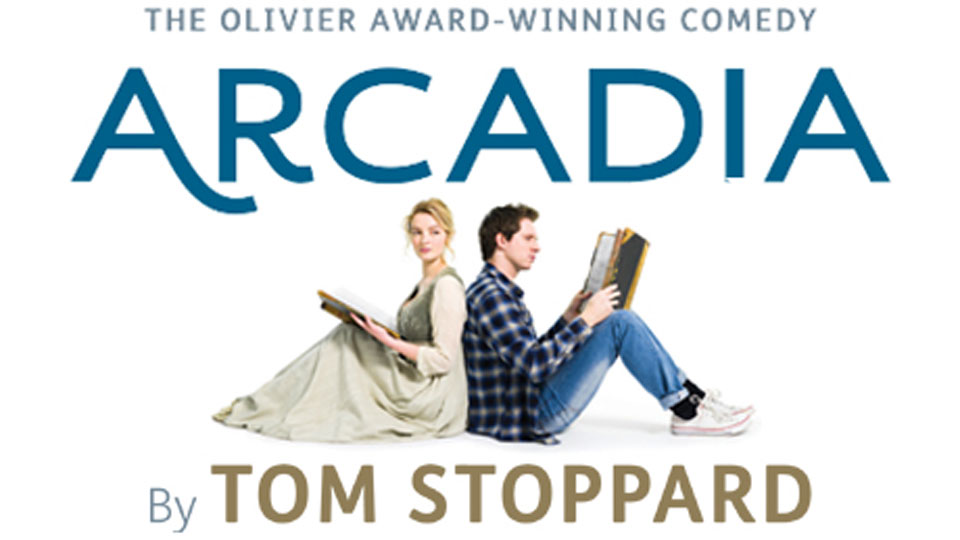 Tom Stoppard’s 1993 play Arcadia, revived for the West End in 2009, has been remounted in a new touring production. The play concerns the interweaving of past and present, with early Nineteenth Century and late Twentieth Century timelines occupying the same room in the same stately home. Two academics mingle with the family of the house in the present day, whilst they try to unpick the secrets of the past, and at the same time the occupants of 1809 live out their lives alongside them. Bernard Nightingale (Robert Cavanah) is a Byron enthusiast, and thinks he thinks he has discovered a dark secret about the Romantic poet. Hannah Jarvis (Flora Montgomery) thinks she’s found evidence of a young mathematical genius who lived in the house at the time of Byron. Is there a connection?

A story synopsis for Arcadia gives only a narrow view of what the play is about. It combines dramatic, scientific and artistic disciplines, exploring multiple ideas. This production gets off to a troubled start with a long scene between young savant Thomasina Coverly and her tutor Septimus Hodge, owing to an inaudible performance from Dakota Blue Richards as Thomasina. The acting profession is overcrowded, leaving many talented individuals underemployed. Thus there are no excuses for an actor to be on the stage without the skills or knowledge to make themselves heard. Unfortunately, Thomasina is a major supporting character, so Blue Richards’ performance leaves the show limping from the get-go. Wilf Scolding is excellent as Septimus, even though he’s effectively talking to himself for his scenes with Thomasina. Scolding brings to life the charming, confident, womanising Septimus who always lives on his wits.

The major success of this production is the pairing of Robert Cavanah and Flora Montgomery as the two sparring yet mutually respectful (most of the time) academics. Undoubtedly their solid, captivating performances raise the production to another level. Taken as a whole, Arcadia only falteringly comes to life, though always when Cavanah and Montgomery are on stage. Another notable performance is Kirsty Besterman, who goes the full Lady Bracknell as Lady Croom. Admittedly, she has many of the funniest lines, but she makes the most of them, and is never anything but delightfully entertaining.

It’s hard to say with certainty why large chunks of Arcadia sag. Partially, it’s the result of mixed performances (Larrington Walker doesn’t have a lot to do as Richard Noakes, and sadly sends up his performance to try to make the most of it), but it’s also down to the source material itself.

Anything Tom Stoppard writes will receive acclaim, and he is one of only a handful of playwrights who can get away with the outrageous excess of a cast of twelve and a run of nearly three hours. The play itself is undoubtedly smart. It’s full of zesty dialogue about metaphysics, mathematics, science and art. The jokes are nuanced and intellectual. Arcadia lends itself to audiences determined to show that they understand every word and appreciate the genius behind it. Much of the text any reasonably-educated person will follow, but it’s delivered through the medium of a playwright who keeps his pen in one hand and leaves the other free to pat himself on the back.

Ultimately: is it dramatic? Arcadia has a strong first act, and a magnificent opening scene in the second act, after which there’s a further hour of the play petering out into coldness and irrelevance, much like the heat death of the universe evoked in the text. For a play that explores the possibilities of dramatising scientific ideas, Arcadia pales next to Michael Frayn’s under-performed Copenhagen. With algorithms, Fermat’s Last Theorem and the Second Law of Thermodynamics occupying dramatic space alongside the classical influences on landscape gardening and Byronic poetry – there are many ideas vying for our attention in the play. Stoppard throws enough at us that some things stick, but perhaps some restraint might have made for a more coherent and tighter play?

Perhaps an excellent production of Arcadia can reveal more of its hidden depths, but the few key weaknesses in this one leave it feeling like an exercise in self-indulgence. There are moments that resonate, and Cavanah and Montgomery are wonderful, but too much of the rest of it collapses under its own weight.