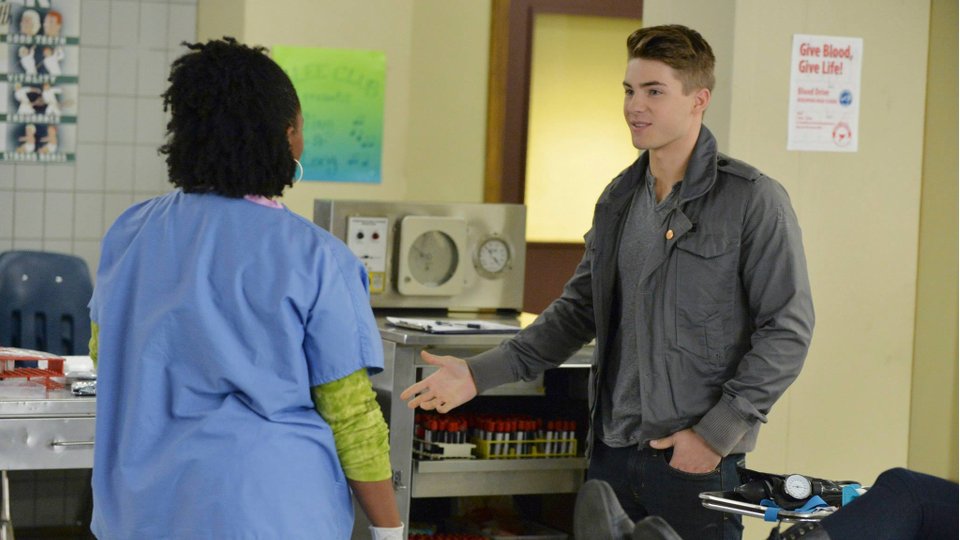 Rosewood was full of twists, turns and familiar faces this week as Pretty Little Liars saw the girls fighting to stop A from framing them again.

If you have seen this week’s episode of Pretty Little Liars and would prefer not to read any spoilers then we suggest you stop reading now. If you have seen it and want to relive all of the action then keep reading.

Not so Magic Mike

Mike’s (Cody Allen Christian) transformation from Aria’s (Lucy Hale) little brother to angsty, super-buff potential A candidate continued in this week’s episode. Aria, Hanna (Ashley Benson), Emily (Shay Mitchell) and Spencer (Troian Bellisario) kicked off the episode at a blood drive and were shocked when Mike was seen acting shifty around the cabinet containing all the blood donations. Convinced he’s taken their blood, the girls appealed to Aria to find out what’s going on with her brother.

After a lot of persuading, Aria finally decided to investigate when Mike received a phone call from the prison where Alison (Sasha Pieterse) is enjoying a stay from a prisoner called Hank Mahoney. Confronting her (uber-ripped and sweaty) brother, Aria got a door slammed in her face and no answers. We however saw that Mike was talking to ‘Hank’ online and had a blood sample hidden in his fridge.

During a tutor session with Andrew (Brandon W. Jones), Aria was interrupted by Emily who had just seen Mike draw out $400 from an ATM and found a receipt for the account which contained over $18k. As they were talking Mike left and the girls convinced Andrew to be their chauffeur whilst they followed him. The trail led them to a diner in the middle of nowhere and Mike was meeting up with ‘Hank’ who is actually Cyrus Petrillo (Jake Weary), Ali’s former partner in crime. The two exchanged a package and then Aria and Emily joined Spencer outside the dinner to keep an eye on them from a distance.

As the girls were talking they missed Mike and Cyrus leave the diner. As a car pulled away, a motorcyclist chased the girls and it turned out to be Cyrus. After telling them he didn’t appreciate being followed and Aria said he had something that belonged to them. Before any negotiating could take place Andrew stepped in with a baseball bat scaring Cyrus away.

Later in the episode the girls received a text message with a picture of three vials of blood with the names Aria, Hanna and Spencer on them. As the episode drew to a close A was seen using the blood on Mona’s belongings. Will they go down for a murder they didn’t commit?

And the next Miss Rosewood is…

Hanna found out that the reason her college choices weren’t offering financial aid is because her estranged father had enjoyed a good financial year. After ignoring her mother’s (Laura Leighton) advice, Hanna turned up at her dad’s office for a chat and was devastated to learn that he’d already spent his money on her step-sister Kate meaning he couldn’t afford to help her. Hanna stormed out of the office and found an unlikely source of advice in the Brew. Chatting to Ezra (Ian Harding), Hanna felt inspired to find a way to get to college and a beauty pageant poster with a prize of a $20k scholarship caught her eye. Before you kknew it she was signing up.

Ashley finally made a decision about whether or not to say yes to Ted (Edward Kerr). After saying yes she also decided to tell him about her night of passion with Jason (Drew Van Acker) which obviously didn’t go down particularly well. Hanna convinced Ashley to fight for Ted if she truly loved him. Will their relationship survive Ashley’s betrayal?

Rosewood’s next ill-fated romance seems to be brewing between Spencer and the Hastings’ new tenant Jonny (Will Bradley). The artist encouraged Spencer to help him with his new mural at Hollis but what he failed to tell her is that what they were doing was actually illegal. Spencer discovered that her late night art activity was plastered all over the newspapers and she confronted Jonny about it. He apologised and told her she needs to ‘colour outside the lines’ for once leading Spencer to explain she had been wrongly accused of murder and was trying to stay out of prison. Despite the anger between the two there’s definitely a spark but will Spencer really cheat on Toby (Keegan Allen)?

The blossoming romance of Emily and Talia (Emily Rae Mayo) hit a rather large snag this week when it was revealed that the mysterious new Brew chef is actually married. Emily came across that nugget of information by accident after returning from a romantic bike ride with her new lady love. Whilst chatting to Ezra, Emily discovered that Talia had a husband and he was listed as her emergency contact in her personnel file. Rather than speak to her about it Emily tried her best to ignore Talia but she didn’t manage for long when Talia turned up on her doorstep. She explained that she is married but that her relationship with her husband has become platonic and he is aware that she’s into girls. Do we believe her people?

Pretty Little Liars continues Tuesdays at 8/7c on ABC Family in the US and Wednesdays on Netflix in the UK. Preview the next episode, Pretty Isn’t The Point, below: