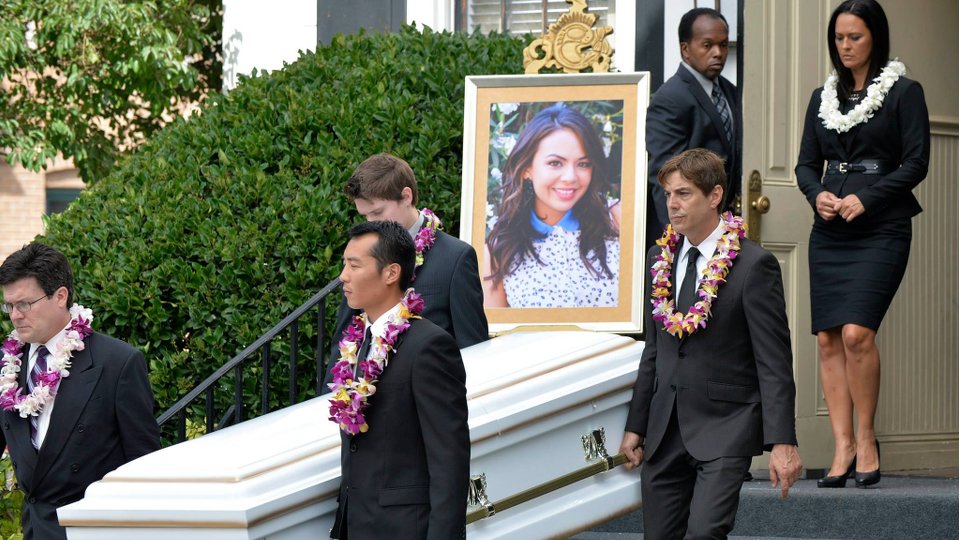 Pretty Little Liars returned from its midseason break with an all-new episode last night in the US and today on Netflix in the UK.

If you haven’t seen the episode yet and don’t want any spoilers we suggest you stop reading now. If you have seen it and want to catch up on all of the latest PLL action then keep reading.

Through A Glass, Darkly picked up three months after the Christmas episode of the show and the day of Mona’s (Janel Parrish) funeral arrived. With no body found and no murderer arrested, it was an even more sombre affair than you would expect save for Ali (Sasha Pieterse) showing up and getting a good old slap around the face from Mrs Vanderwaal (Sydney Penny).

It’s not all that clear. Hanna (Ashley Benson), Spencer (Troian Bellisario), Emily (Shay Mitchell) and Aria (Lucy Hale) were all convinced that Ali was the murderer and that their former friend was the real A. Whilst Caleb (Tyler Blackburn) worked hard trying to decode Mona’s laptop, Spencer and Emily put their heads together and decided to try and take Ali down. Their first stop was to take down her alibi so they headed to Jason (Drew Van Acker) and confronted him about lying to the police.

When that didn’t seem to achieve anything, Emily suggested that they plant evidence in Mona’s house that Ali was there. Initially reluctant Spencer went along with the plan and they took a hairbrush (that Emily lifted from the DiLaurentis house) to Mona’s house. As they were about to put the hair in a vent downstairs, they noticed a camera and made a quick exit.

The girls then appealed to Hanna, who knows Mrs Vanerwaal the best, to visit the grieving mother and suggest that Mona had planted cameras in the house and maybe the police should give it another sweep. Taking the advice on board, it wasn’t long before the cameras were found and footage of Mona fighting her attacker was uncovered. Lieutenant Tanner (Roma Maffia) called Jason in to the station to view the footage and he admitted that the person attacking Mona in the video could be his sister. He also revealed that he had lied to cover for his sister.

As Ali returned home that night, Jason greeted her as police sirens arrived at the door. Making one last ditch attempt to flee, Ali was stopped by Hanna, Emily, Spencer and Aria, and arrested by Tanner. By the episode’s end she was in her orange jumpsuit and the girls were feeling positive that the A stuff was behind them until a fireworks display flashed up the letter A before promptly showering all over the lawn they were standing on. Maybe it’s not Ali after all?

Spencer started off the episode with a one-way ticket to prison for murdering Bethany Young. Toby (Keegan Allen) looked into the case with Tanner whilst Spencer was informed that Bethany’s parents were fighting to have her bail revoked. Tanner told Toby that Jessica DiLaurentis (Andrea Parker) gave a statement to Detective Wilden (Bryce Johnson) 2 years ago that he never declared stating that she saw Spencer in her garden putting her at the scene of the crime.

The hope that the letter found in Ali’s house confirming a relationship with Bethany would give Spencer leverage was short-lived as it was thrown out as evidence with the suggestion that Spencer forged it.

All came good in the end though after Ali’s arrest when Tanner and Toby visited Spencer to tell her that they think Ali killed both Bethany and Mona, and that she was now off the hook.

Aria battled the disappointment of being rejected by her college choices and appealed to Caleb to help her hack into the database and see if A had been meddling again. Caleb offered to help Aria learn to hack and gave her Mona’s computer (terrible idea on both counts).

Aria stopped by the old coffee shop that Ezra (Ian Harding) has taken over now the previous owner Zack (Steve Talley) has been disgraced and left Rosewood. Ezra enlisted Mike (Cody Christian) as a favour to Aria to try and find out how he was feeling about Mona. Mike texted Aria asking her to pick him up but when she arrived she was attacked by A who tried to suffocate her, had lifted Mike’s phone and stole the laptop from her bag.

Shaken up, Aria told Emily what happened and then returned home where Mike arrived shortly after her. The siblings had a heart to heart with Mike crying about Mona and saying that no one knew her despite everyone being nice about her since her death.

Despite being told not to by Caleb, Hanna called Mrs Grunwald (Meg Foster) and asked her to help the liars find Mona’s body. The creepy old woman is known for her other worldly powers but all she could confirm is that Mona’s body was no longer in Rosewood. After seeing Hanna she bumped into Ali on the street and the two shared a tense exchange. Does Mrs Grunwald know the truth?

Emily and Paige (Lindsey Shaw) approached their last day together in Rosewood following the decision by Paige’s parents to move her to California. Despite begging Paige to fight her parents and stay, Emily was left with tears running down her cheeks when Paige agreed that she needed to leave town and be somewhere safe.

Pretty Little Liars continues at 7/8c on ABC Family Tuesdays in the US and on Netflix in the UK every Wednesday.