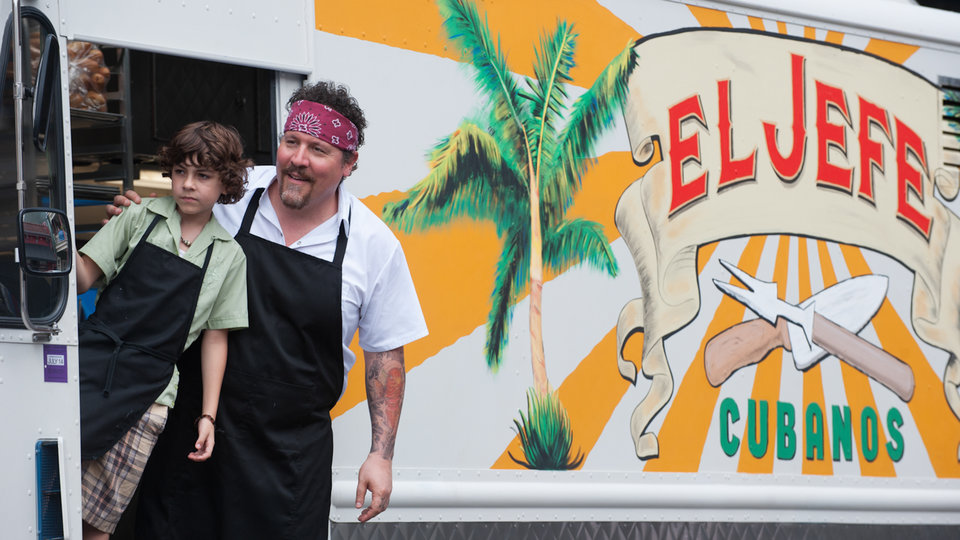 Carl Casper (Jon Favreau) is a great Chef stuck in a rut. When a particularly harsh critic (Oliver Platt) bashes his work, Carl decides to re-evaluate his life. Armed with his best friend (John Leguizamo) and a son (Emjay Anthony) he has lost touch with, Carl begins a road-trip in an old sandwich truck to rediscover his love for food.

John Favreau has been a true unsung hero of modern Hollywood. From his breathtaking debut penning 1996’s seminal hit Swingers to helming Marvel’s dominance at the box-office with Iron Man, Favreau has always been a man up for the challenge. His latest writer/director project is a sumptuous treat that delights from start to finish and finds Favreau returning to a more character-focused ensemble.

The film oozes quality like melted cheese, with culinary scenes that make your mouth water. Favreau the director really manages to capture exactly what makes fine-dining, cooking and eating such enjoyable experiences. The start of the film focuses more on the art of cooking and we slowly change focus throughout the story to more home-cooked, traditional fare. The cooking scenes are put together gloriously with an attention to detail that’s staggering (check out the post-credit sequence where Favreau learns how to make the perfect toasted cheese sandwich).

Favreau the actor also brings with him a glorious aura of relatability that makes us instantly champion his predicament. His dynamic with everyone is sensational but his central relationship with Emjay Anthony as his son Percy is a particular high-point. Their connection through technology is also very well handled in the movie with Chef adopting the trends of social media to great effect. It’s the most inventive and relatable use of Twitter, Facebook, Instagram etc you’ll see in a film this year.

Robert Downey Jr, Scarlett Johansson, Oliver Platt, Dustin Hoffman and Sofia Vergara all add their spice to the mix too. All of them hand in great support with Downey Jr. stealing his one scene as a man Carl has to turn to for help when he needs a food truck. Johansson adds a sultriness to her small role as one of Carl’s restaurant co-workers whilst the always brilliant John Leguizamo is an utter joy as the quick-talking Martin. Throw in Bobby Cannavale for light comic relief and you have one of the best ensembles of the year.

A film with heart and appetite, Chef is a foodie’s dream that will leave you craving Cuban sandwiches. Go and see the film with an appetite and you’ll positively want to chew the screen off. But it’s so much more than just scenes of deliciousness. This is a great story about one man’s desire to find expression and passion in his working life. It’s a story about picking yourself up when you’ve taken a blow and it’s a film about how passion can lead to happiness. All in, Chef is a glorious ode to food and a wonderfully immersive experience that you can’t help but fall in love with.