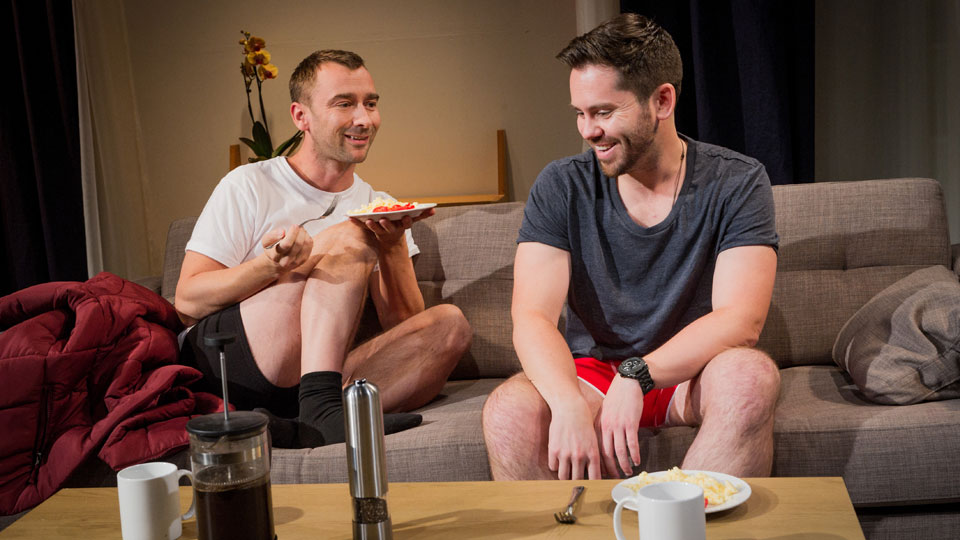 New American play Next Fall, which was backed on Broadway by (amongst others) Elton John, receives its UK premiere at Southwark Playhouse. A timely piece, Next Fall examines the relationship between Adam and Luke, loving but troubled by the irreconcilable problem of religious differences. Luke is a practising Christian, not out to his Southern bible-believing family, whilst Adam is older, more worldly, atheistic and unable to understand or admire his partner’s religiosity.

The most successful aspects of Next Fall are that it captures in beautiful detail the different stages of a relationship, from early infatuation to learning to compromise; and it is also very funny – it’ll make you laugh and may even make you cry.

There are, however, structural problems, not least some confusing exposition. There’s also one too many characters, with the part of Luke’s friend Brandon extraneous and really belonging in another play altogether. His story is perhaps an indication of playwright Geoffrey Nauffts trying to achieve too much – and the nagging feeling is that Next Fall is a little unfocussed and too long. Perhaps fewer scenes would help: Luke Sheppard’s direction ensures transitions are neat and painless, but there are a lot of adjustments, which is fine for cinema, but it leaves a theatre audience having to work out a large number of settings.

It would be easier to forgive the occasional wooliness if pay-offs to established conflicts were better resolved. We feel that the central character, Adam, remains too enigmatic. When Luke is injured in an accident, his friends resort to ritual and superstition for comfort. Having established Adam’s antipathy to that worldview with a well-written polemic, Adam is given little to do in these moments and offers no alternative. Fear of death (and justification for control and oppression) are the sole reasons religion persists in the 21st Century. It’s a missed opportunity that Next Fall uses it thematically without deriving dramatic mileage from it or lending a strong voice to any particular alternative belief or ideology.

Whilst the play veers into melodrama in parts, these moments aren’t troubling because Nauffts has created characters that you care for, and this production boasts a universally strong cast. Charlie Condou is rock solid as Adam, and he plays the part with great dignity. His flashes of vulnerability beneath self-defensive sarcasm are affecting. Martin Delaney is perfectly cast as the doe-eyed, loveable but deeply conflicted Luke. Many of the best lines go to Adam’s friend Holly, and Sirine Saba is on sublime form extracting every ounce of humour with deft comic timing. She’s thoughtful when she needs to be too, but always a pleasure to watch. Mitchell Mullen deserves credit for his performance as Butch, Luke’s father. It would be easy to play Butch as a bible-bashing stereotype and as a pantomime villain. Mullen works hard to convey a real human being who is misguided and (like all of us) imperfect, and ultimately earns unexpected sympathy.

Overall, we found Next Fall moving and thoughtful, and we loved the work of the cast. We applaud the efforts of the play in examining the difficult and emotionally raw conflict between homosexuality and religion, and the place of religious faith in modern western society: but we are left feeling that the piece is perhaps a draft or two away from being as powerful as it should be.