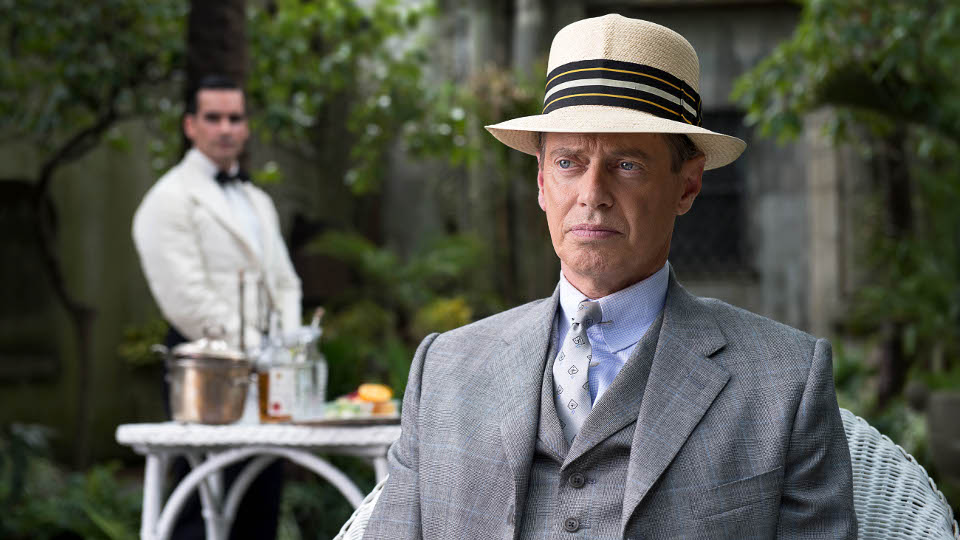 Boardwalk Empire returns tonight in the US for its fifth and final season. UK viewers will have to wait until next Saturday (September 13th) to catch-up on the action.

If you’re not up to date with the Boardwalk Empire TV show and like to avoid spoilers we strongly suggest you don’t read any further.

Season five is set in 1931 during the Great Depression – two years after the stock market crash in 1929. Around 7 years have passed since the events of last season. The 58-minute premiere is written by Howard Korder with Tim Van Patten back in the director’s chair. The fifth season will feature 8 episodes instead of the normal 12.

Here’s the official trailer from HBO to tease you:

The episode is titled Golden Days for Boys and Girls – the official synopsis reads:

[quote]Awash in memories from his pier-boy days growing up in 1884 Atlantic City, Nucky (Steve Buscemi) recalls first catching the eye of the Commodore. 1931 – Nucky joins Sally Wheet (Patricia Arquette) in Cuba, and with a U.S. Senator in tow, forges ties with Bacardi Rum with the hope of Prohibition’s repeal in the U.S.

While working on Wall Street, Margaret (Kelly Macdonald) finds herself in the hot seat when her boss, facing an internal investigation, decides his own future.

Down but never out, Chalky (Michael Kenneth Williams) seizes an opportunity to extricate himself from a difficult situation.

In New York, Lucky Luciano (Vincent Piazza) sets in motion a bold plan – a move that reverberates with Nucky all the way in Cuba.[/quote]

The Season Four finale brought many of the long-running plot threads to a close so it will be interesting to see how they bring the show to an end. We can’t wait to see more of the hapless Van Alden (Michael Shannon) and the psycho Al Capone (Stephen Graham). We’re also hoping for a reunion between Nucky and Margaret.

Let us know your hopes and predictions for the final season in the comments below and check back next week for our recap of the premiere as well as a preview for episode two.

Tune in to Sky Atlantic HD at 9pm on Saturday 13th September to see the episode. Preview it with our gallery below: