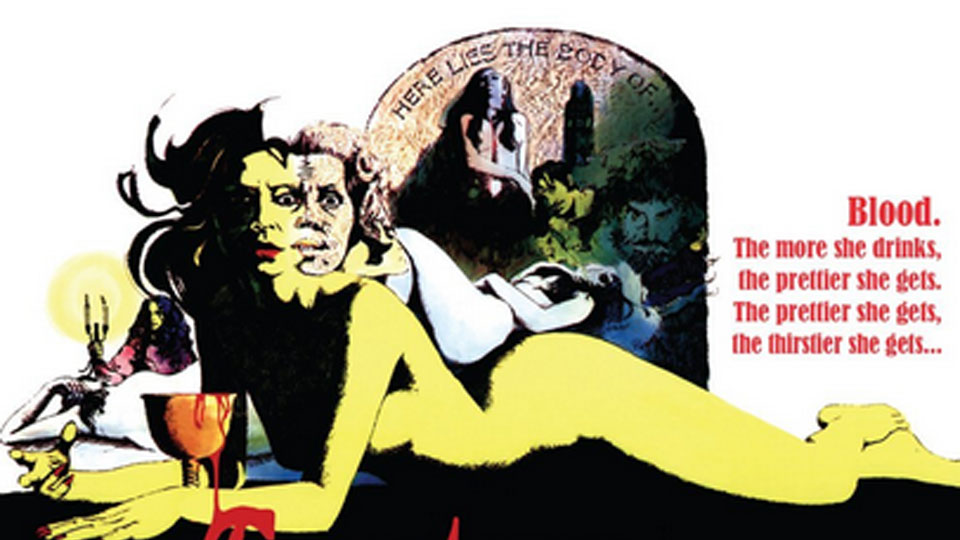 One of Hammer’s most popular beauty queens, Ingrid Pitt, is the star of the misleadingly-titled Countess Dracula. Her character, Countess Elisabeth Nadasdy, is actually based on the real-life Sixteenth Century Hungarian Countess Báthory, one of the worst serial killers in history who is alleged to have bathed in the blood of her virginal victims. Don’t expect a female equivalent of Christopher Lee biting the necks of virgins: Countess Dracula is in reality much more thoughtful than the daft title suggests.

The macabre tale of Countess Báthory is fitting source material for Hammer, and this 1971 release nobly tries to offer something a bit different to their staple of endless and increasingly indifferent Dracula and Frankenstein’s monster sequels. Cleverly, the script merges the actual legend of Countess Báthory with nods to The Picture of Dorian Gray. The haggard and cruel Countess Nadasdy finds that rubbing the blood of virginal women over herself restores her former beauty. Yet the effect doesn’t last for long, and each time it wears off she is uglier and more ravaged than before. But in her quest for eternal youth, Nadasdy demands more and more young female victims from amongst the local villagers.

Countess Dracula is part love-story and part court-intrigue. When the young Lieutenant Toth (Sandor Elès) sees the unblemished Nadasdy, he falls in love with her, little realising her true nature. But Captain Dobi (Nigel Green) is the longstanding lover of Nadasdy, and he’s not about to see a young upstart come along and steal his woman. The most effective element of the story is the suspense built up around Nadasdy hiding the hideous truth from the idealistic Toth.

The late Ingrid Pitt gives one of her best performances, ably conveying the desperation of Nadasdy’s futile quest for eternal youth. She is not simply a plot device to perpetrate evil, but a rounded character in her own right. Similarly, Nigel Green is given something to get his teeth into as Captain Dobi. Green, best-remembered for The Ipcress File, sadly died prematurely shortly after Countess Dracula was made, but it’s a reminder that he was a solid character actor. Maurice Denham also turns up as the Castle Historian, a comedy part (think Polonius in Hamlet) that he makes the most of; and the beaked face of Patience Collier (a big stage actor in her day) is instantly recognisable as Nadasdy’s old nurse. There’s also screen time for Peter Jeffrey, a positive boon to any production. Less satisfactorily, Lesley Anne-Down is underwritten as Nadasdy’s daughter, and having established the dire plight of the villagers in the opening sequence, there’s very little sense after ten minutes into the film of a world even existing outside the castle walls.

Whilst it may not quite hang together as well as the very best Hammer Horror pictures, Countess Dracula impresses with its successful attempt at breaking the usual expectations of the studio’s output, which by the 1970s had become threadbare. The high-definition doesn’t disguise the relatively low quality of the film stock, but it does give the movie the cleanest, most pristine transfer it’s ever likely to enjoy.

There are some great pickings to be found on the extras, including the television work of the two leads. Ingrid Pitt can be seen in Where the Action Is, an episode of Brian Clemens’ Thriller; whilst Nigel Green can be seen in Conceptions of Murder. There’s also an archive interview with Ingrid Pitt recorded when her autobiography came out, in which she is clearly distressed to recall her childhood experience in a Nazi concentration camp. A commentary track, in which Ingrid Pitt lends her thoughts on the movie, was recorded for an earlier DVD release and is retained for Blu-ray.

Countess Dracula is released as part of Network’s The British Film collection. Check out the clip below.