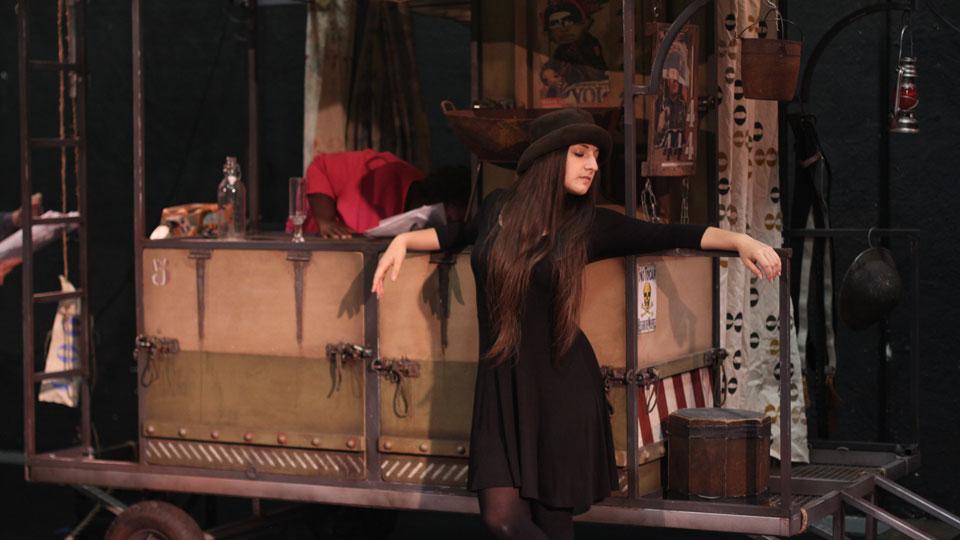 Mother Courage and Her Children uses Woolwich’s historic Royal Arsenal Site as a backdrop for Brecht’s play about the consequences of trying to profit from war. The show is a collaboration between Teatro Vivo and Greenwich & Lewisham Young People’s Theatre, and runs from 5th to 21st September.

Mother Courage, a canteen woman, pulls her cart with her three children in the wake of an army, trading with the soldiers and attempting to make profit from the Thirty Years’ War. Her wheeling and dealing allows her family to thrive for a time, but she ultimately pays the price for her profiteering, leaving the audience to question who really gains. In the centenary year of WWI, audiences are invited to become war refugees and follow Mother Courage’s cart as she pulls it through the Royal Arsenal Site, which has a rich history as part of Britain’s War machine.

Written in 1939, Mother Courage is one of the nine plays that Brecht wrote to counter fascism and Nazism and this important text retains relevance to this day in the light of conflicts in Syria, Iraq and Crimea.

Bertolt Brecht’s play is brought vividly to life against a backdrop of cannons, in a promenade performance that draws on the Woolwich Arsenal’s history as part of Britain’s war machine, and highlights the human cost of surviving conflict.

Audiences are invited to become war refugees, engaging with a cast of professional actors and a Community Chorus of 30 local people. They will go on a dramatic journey through the site, experiencing Woolwich’s own war history, and the historic Royal Arsenal Site itself through drama, poetry and song.