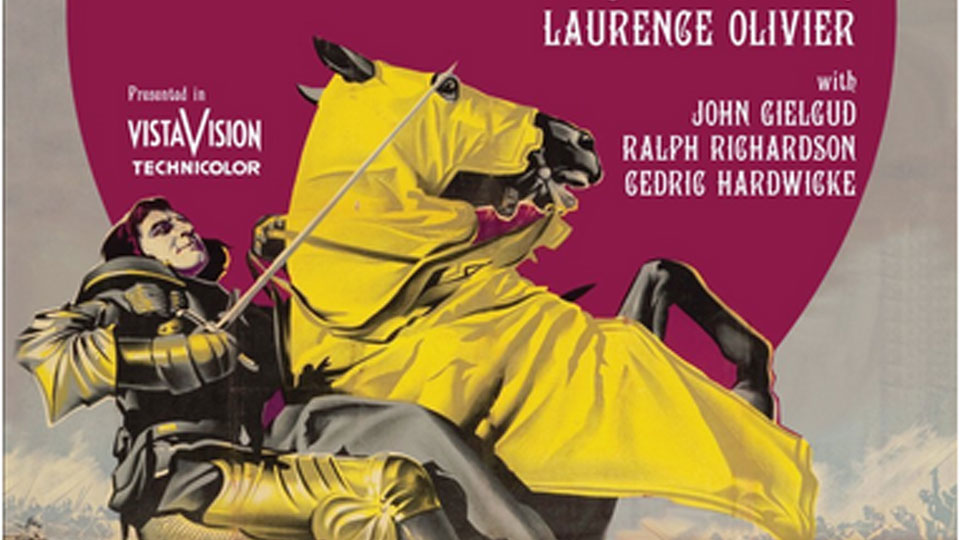 Laurence Olivier, one of the great actor/managers of the Twentieth Century and widely-cited as one of the UK’s finest actors, had enjoyed enormous success on stage in Shakespeare’s historical play Richard III. After similarly adapting Henry V and Hamlet for the big screen, Olivier immortalised his portrayal of the evil, scheming monarch in this 1955 film version, which he also directs.

Olivier’s acclaimed adaptation goes for a faithful period retelling of Shakespeare’s Hollywoodized history lesson. Pageantry, velvet gowns and a mock Tudor score by William Walton usher in Olivier’s would-be king. It’s all gloriously theatrical; and with his long black wig, hunched back and false nose, Richard III is a character Olivier embodies with every fibre of his being.

Theatre lovers will adore this film. There are few movies where you can see the greats of Twentieth Century theatre in the same ensemble: Olivier casts his great peers/rivals John Gielgud as the hapless and ill-fated Clarence; and Ralph Richardson as Buckingham, his right-hand man. Fresh from two seasons at the Old Vic playing opposite Richard Burton, Claire Bloom is at her finest and loveliest as Lady Anne, the woman who allows herself to be wooed by Richard. There are small roles for other greats of stage and screen such as Cedric Hardwicke (yet another knighted actor in the cast), Stanley Baker and Timothy Bateson. Doctor Who fans will delight in seeing, in the small part of Tyrell the murderer, Patrick Troughton, who specialised in petty criminals at the time.

Whilst the film unites some of the finest talent of Twentieth Century acting, it has to be stated that its execution is very stagey. Olivier was a fine actor and a terrific theatre director: but his movies lack a cinematic quality (arguably, in this film, the battle of Bosworth achieves an epic feel – watch out for the arrow that flies into Olivier’s ankle). Sixty years after it was first made, contemporary viewers may struggle with the slow pace and overt theatricality, especially if they have seen Ian McKellen’s Richard III and see that as a benchmark for cinematic adaptations of the Bard. Although Olivier was a great innovator and moderniser, his portrayal of Richard III, and the beautifully enunciated Shakespeare of the rest of his cast, feels dated now when the fashion is to speak Shakespearean prose naturally, not poetically.

Olivier’s theatricality doesn’t undermine the success of Richard III as a movie in its own right: however it will alienate viewers who aren’t aficionados of theatre and its history. It’s a matter of taste. However, nobody can dismiss the inspired directorial flourishes that Olivier brings. There’s a wonderful introduction to Richard’s first soliloquy, when the camera moves slowly through an ajar door and Olivier breaks the fourth wall by addressing the audience directly. Daring, for the time. It would later inspire Andrew Davies’ character Sir Francis Urquhart in House of Cards, now revitalised by Kevin Spacey. Well, it all started with Olivier…

Olivier’s Richard III has always been a colourful, vibrant film and a feast for the senses (thanks to the Technicolor film stock used in production), but it looks more beautiful than ever restored and promoted to high-definition. Extra features include original trailers, including a black and white TV trailer showing Olivier arriving by car at Shepperton Studios; and extensive image galleries. A dry 1984 TV dramatisation called The Trial of Richard III is one for the history buffs; but it’s more than enough to have one of Laurence Olivier’s finest achievements as actor and director restored and released to enjoy like never before.

Richard III is released as part of Network’s The British Film collection.