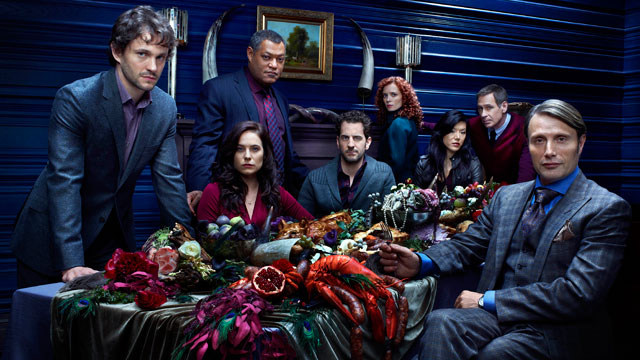 Hannibal’s second season just came to an end here in the UK and already the show’s creator Bryan Fuller has been talking about what’s coming up in the third season.

If you haven’t seen the season 2 finale of Hannibal and don’t want any spoilers then stop reading now. If you have seen it and want to read our thoughts on the new season keep reading.

The season 2 finale was a bloodbath to put it mildly with Hannibal (Mads Mikkelsen) leaving Will Graham (Hugh Dancy), Jack Crawford (Laurence Fishburne), Alana Bloom (Caroline Dhavernas) and Abigail Hobbs (Kacey Rohl) for dead. After the credits rolled we saw Hannibal on a flight to France with Dr. Bedelia Du Maurier (Gillian Anderson).

From the Hannibal panel at Comic-Con we know that Commander Pazzi, Lady Muraski, Dr. Cordell Doemling and Francis Dolarhyde will all be making their debuts in the show’s third season. We also know that a year will have passed from the season 2 finale and the Dr. Chilton (Raul Esparza) last seen dead will be back in some capacity.

As we ponder who may have survived the bloodshed of the season 2 finale, we’ve put together a list of the 10 things we want to see when the show returns next year:

1. Will Graham to get his thirst for capturing Hannibal back. There was a serious amount of mind-games played in season 2 leaving Will confused about whose side he was really on. After starting the season in a mental institution and desperate to prove Hannibal’s guilt, the lines started to blur once the doctor got inside his head once more. After being left for dead, Will surely has to have only revenge on his mind in season 3.

2. Alana Bloom to survive. There’s hope that she could make it after her window fall at the hands of Abigail and we hope that Hannibal isn’t planning to kill off another lead female character after the shock death of Beverly Katz (Hettiene Park) earlier in the season. Alana has quite a lot of making up to do as she was the most blinded by Hannibal and could have easily been his downfall.

3. Dr. Bedelia Du Maurier to become a regular character. All signs point to this being a very good possibility, especially as the secretive doctor was seen jetting away with Hannibal at the end of season 2. Has she been in on his murders all along or has Hannibal successfully managed to brainwash her into doing what he says? We can’t wait to find out and Gillian Anderson is excellent in the role.

4. More Will and Hannibal moments. The chemistry between these two characters is one of the strongest parts of the show and we’re slightly worried by the recent news that they’ll spend most of season 3 apart from one another. We’re hoping that either in flashback or when they do meet up there’s plenty of moments where they get to interact with one another.

5. Jack Crawford’s fate. Ok so we know we’re obviously going to find this one out but our money is on him being dead. It would be a bit too safe for 3 of the 4 characters to survive their injuries and his was arguably the most severe. It’s going to be tough to say goodbye to Jack if he is dead and what will happen to his terminally ill wife Phyllis (Gina Torres) who asked Hannibal to look after him? We hope we’re wrong on this but Jack now has too much evidence against Hannibal to survive.

6. Plenty more creepy Hannibal moments. We admit that the food preparation scenes make us queasy but we liked that Hannibal’s dark side was more present throughout the second season rather than insinuated like it was in the first season. Bryan Fuller has revealed that Hannibal will be in Italy in the third season and we hope he creates plenty of havoc.

7. Margot (Katharine Isabelle) and Mason Verger (Michael Pitt). It was a thrill to see these two characters in the Hannibal world and there’s unfinished business between Will and Margot for sure. Mason was a creepy villain and revenge must be on the cards for what Hannibal did to him?

8. A bit of light amongst the dark. Don’t get us wrong, the dark tone of Hannibal is part of its appeal but we’d like to see glimmers of light throughout the third season. No one got much of a happy anything in season 2 did they and the season contained some of the most disturbing things we’ve ever seen on network television.

9. More on intrepid reporter Freddie Lounds (Lara Jean Chorostecki). We still feel that Freddie is under-used on the show although we did enjoy her fake murder in season 2 as part of the plan to capture Hannibal. Who else thought Will might actually have murdered her? When the third season picks up maybe we’ll see Freddie promoting the book she was writing about Will and Hannibal?

10. More Jimmy (Scott Thompson) and Brian (Aaron Abrams). The two crime scene investigators were drastically under-used in season 2 especially considering that Beverly was murdered. We want them to be more integral to the third season with plenty more screen-time. Their banter offers a bit of light relief in the otherwise dark and sinister show.

Hannibal will return in 2015 for a third season in the US and the UK.