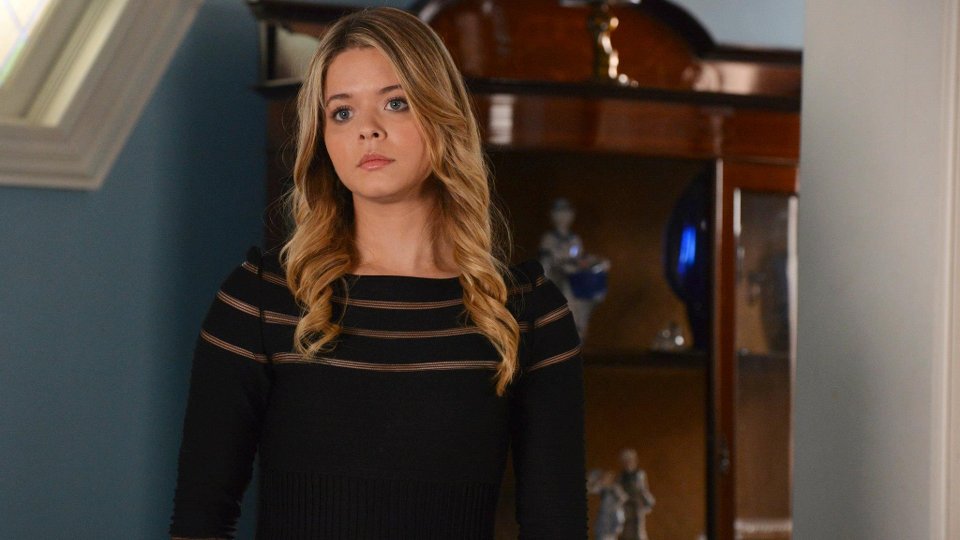 The discovery of Jessica DiLaurentis’ body in the Hastings back yard last week provided plenty of drama and finger-pointing in this week’s episode of Pretty Little Liars.

If you haven’t seen the episode and want to avoid spoilers we suggest you stop reading now. If you have seen it and want to relive the action keep reading.

The latest episode of PLL opened with the girls getting ready for Jessica’s funeral with Ali (Sasha Pieterse) committing a rather large fashion faux pas by picking the dress her mother wore to her funeral. Talk about awkward. Suffice to say her father Kenneth (Jim Abele) wasn’t all that happy about it.

After the funeral it was time for Aria (Lucy Hale), Emily (Shay Mitchell), Spencer (Troian Bellisario) and Hanna (Ashley Benson) to return to Rosewood High and face the music following their escapades in New York and the return of Alison. After a stern talking to by Principal Hackett (John O’Brien) the girls soon discovered that returning to their old lives wasn’t going to be a walk in the park. Seriously did anyone expect it would be?

Over the course of the episode we spent time with each of the girls as they battled with their demons and personal issues. Aria continued to battle with her guilt over the death of Shana (Aeriel Miranda) and after initially refusing, went to see Ezra (Ian Harding) who was recovering at home following his shooting. A frank conversation left the two in limbo but with Aria sure that Ezra would toe the line when it came to Alison’s big lie about being kidnapped for two years.

Alison herself paid Ezra a visit too after she got his manuscript from Aria. Pressing the teacher about the fact that he’d supposedly destroyed his research, Ali soon confirmed what she already suspected; he had hidden some of the research to protect and help Aria as/when she needed it.

Aria then returned to see Ezra after finding out Ali paid him a visit and she revealed all about accidentally killing Shana. Despite looking a bit shocked about the revelation he simply said ‘how can I help?’ Could this be the start of the road to redemption for Ezra?

Spencer continued to dig into her family demons with her father Peter (Nolan North) and sister Melissa (Torrey DeVitto) both acting strange. Trying to discover whom Jessica was emailing on the night she was murdered, Spencer continually came up against a brick wall with her father refusing to tell her anything. When Melissa showed the temptation to reveal the secret she keeps alluding to, Peter shut her up and sent Spencer to her room. Prior to that both told Spencer to cut her ties with the DiLaurentis family, something she isn’t keen to do.

She did go to speak to Jason (Drew Van Acker) who was planning on taking a road trip to escape the drama around his family and the return of Ali. The conversation led Spencer to realise that the reason Jessica never sent her email is because she confronted the intended receiver in person, which is how she wound up dead. Jason warned her to stop digging and told her not to trust their father.

Hanna reflected on the person she became after Alison disappeared and was shocked to realise that she’d been turned into Alison 2.0 by Mona (Janel Parrish). Her epiphany came when she went to the funeral home with Ali and was mistaken for her. A sideways catty remark from Ali about how it used to be easier to tell the two of them apart, sent Hanna into flashback mode as she recalled a series of events with Mona that shaped the person she turned into once Ali was gone. She later confronted Mona who pointed out there was no resistance from Hanna to turn into a different person pushing Hanna to make a change courtesy of a quick trip to the salon. Interesting to note Mona was watching through the window and it seemed like she was talking to Alison.

Emily had to deal with Paige (Lindsey Shaw) for most of the episode as her former girlfriend tried to find out if there was any way back for the two of them. The introduction of a new member of the swim team, Sydney Driscoll (Chloe Bridges), gave Emily a brief distraction as the new girl on the block was in awe of Emily’s swimming achievements. Could she be a new love interest do we think? Paige found any and every opportunity to put herself in front of Emily, which resulted in the confirmation that they were over and hopefully one day they could become friends.

Elsewhere in the episode Emily and Hanna went on another trip to Philadelphia to do more digging about the building they saw Jason come out of last week. Bumping into the creepy old man they saw last time they discovered that the building was a meeting place for people dealing with addictions. Looking back at the timeline they realised Jason couldn’t possibly have killed Jessica putting him in the clear.

After her little visit to Ezra, Ali bumped into Peter Hastings who offered to give her a lift home. Whether he did or not we don’t know but what we do know is she looked terrified and her returned home spinning some story about going out secretly to buy pretzels. Suspicious much?

Pretty Little Liars continues at 8/7c Tuesday on ABC Family in the US.