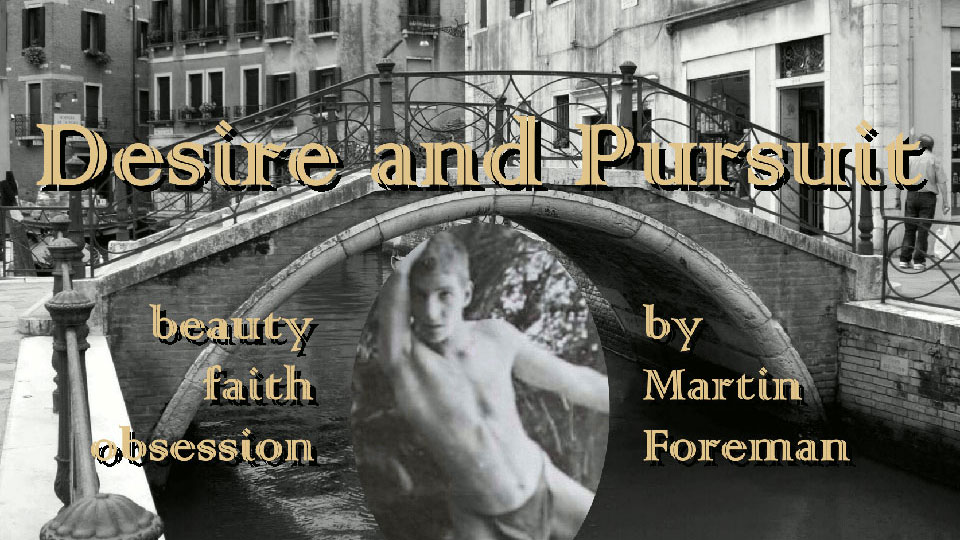 Desire and Pursuit will play in London before running as part of the Edinburgh fringe. Award-winning gay writer Martin Foreman portrays three very different men whose lives have been dominated by male beauty.

You can see the plays at the Etcetera Theatre in Camden between 8th and 13th July. The evening comprises:

i) Angel: Take This Body
A priest who has devoted his life to God confronts the man – or angel, or demon – who haunts him. What must he do to destroy the passions that threaten his soul?

ii) Now We Are Pope: Frederick Rolfe in Venice
Cantankerous eccentric writer Frederick Rolfe (1860-1913) rejoices in exile and the companionship of the gondoliers of Venice while reliving his most famous novel, Hadrian VII, in which an Englishman is suddenly elected Pope.

iii) Tadzio Speaks . . . Death in Venice revisited
Thomas Mann’s classic story about an older man’s obsession with a teenage boy, told by the once beautiful youth. Decades later, Tadzio looks back at that fateful summer.

All three plays will also be produced separately at TheSpace on North Bridge at the Edinburgh Fringe, 18 – 23 August.

You can book for the Camden shows through the Etcetera Theatre website.

In this article:Desire and Pursuit, Etcetera Theatre, Martin Foreman