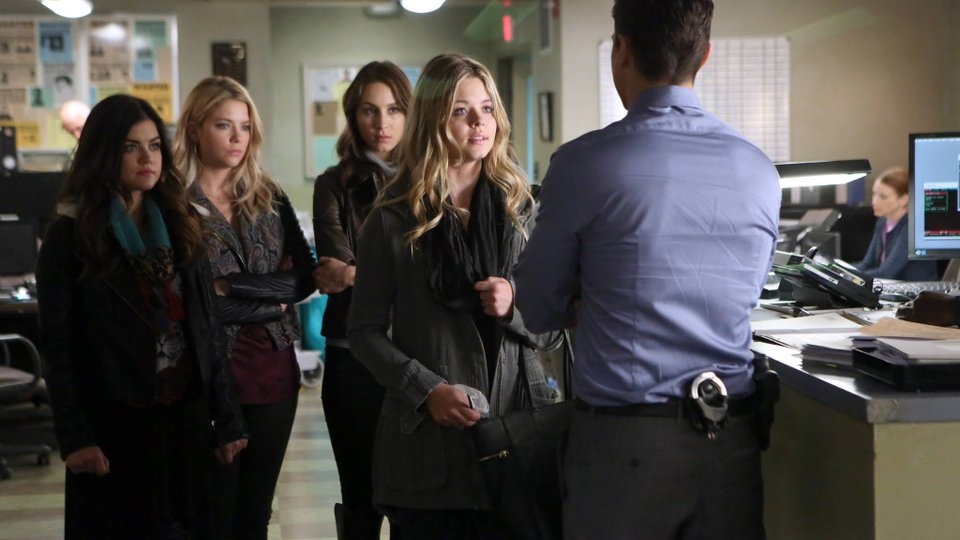 Alison DiLaurentis (Sasha Pieterse) found out that coming back from the dead isn’t very easy in the latest episode of Pretty Little Liars.

If you haven’t seen Whirly Girlie we suggest you stop reading now so we don’t spoil anything for you. If you have seen it and want to relive all of the action keep reading.

Following the events of last week’s action-packed opener which saw Shana (Aeriel Miranda) revealed as A and promptly killed after a scuffle with Aria (Lucy Hale) it was time for Alison to return to Rosewood and face up to what had happened over the past two years. Arriving on a bus with Aria, Emily (Shay Mitchell), Spencer (Troian Bellisario) and Hanna (Ashley Benson), Alison almost went back on her decision to return to Rosewood but was convinced she was doing the right thing by her friends.

Before reuniting with her family, the girls took Ali to the police station to speak to Holbrook (Sean Faris) and tell him everything that had happened to them. Once in the station Ali went off script making up a new lie that she’d been kidnapped and held prisoner. As Holbrook started to pick holes in Ali’s latest lie, her father Kenneth (Jim Abele) turned up and took his daughter home.

Spencer returned home with Emily to find her mother Veronica (Lesley Fera) furious and worried about where her daughter had been. An emotional exchange prompted Veronica to tell Spencer that Melissa (Torrey DeVitto) was back from London and keeping secrets. Is Mama Hastings finally beginning to realise her eldest daughter isn’t the saint she thought she was?

Over in the Marin household Hanna tried to fend off the dozens of questions being thrown at her by her mother Ashley (Laura Leighton) who was trying to understand how her daughter could hide Ali’s secret and still get on with her normal life.

One liar who wasn’t coping so well with the most recent turn of events was Aria who tired to find out how Ezra (Ian Harding) was doing in the hospital only to be interrupted by her brother Mike (Cody Allen Christian) who was listening at the door. As Aria tried to rush her brother out of her room he told her he’d heard part of her phone conversation.

Back at the Hastings household Spencer went to find Emily who was outside on the phone to her mother and embellishing Ali’s lie. The two girls had a brief argument with Spencer frustrated that they were once again lying for Ali after they thought everything was over and they could go back to living their lives. As they were bickering they spotted Jason (Drew Van Acker) cleaning his car in the dead of night next door. As he went in the house the girls headed over and Ali threw her phone to them out of the window. On the screen was a message from an unknown number that read ‘The truth will bury you in a New York minute’. As they looked to Ali for answers she drew a question mark on her window, turned out the light and disappeared. Spencer and Emily then realised why Ali had lied to Holbrook as she was scared of whoever sent the text message.

Inside the DiLaurentis house Ali had an emotional exchange with her father and the absence of Jessica DiLaurentis (Andrea Parker) was touched upon. Kenneth made it clear that he would do whatever he had to do to protect his daughter and allow her to live her life again. Later in the night Ali lay in bed frightened as Jason watched over her from the door. Creepy much?

Over at the Montgomery house Aria struggled to get to sleep battling with the guilt of killing Shana. After waking with a start she began to hear the sound of violin music – the same music Shana used to play – coming from outside her window. Is it just guilt or is someone playing with her? Before we got time to question it Hanna interrupted by calling and told Aria about the text Ali received.

The next morning Kenneth appealed to Ashley to help him find Jessica. He asked her to go through Jessica’s emails for clues as to where she might be. Hanna overheard everything by ear-wigging at the top of the stairs.

Back at the DiLaurentis house Ali confronted Jason about why he hadn’t asked her any questions about where she’d been or what happened. She also probed about her mother’s reaction with Jason admitting she was as shocked as everyone else. A car pulled up drawing their conversation to a close and revealing that Jessica had rescued a dog before her untimely demise, which Ali agreed to take in.

With news of Ali’s latest story circling the town, Mike approached Mona (Janel Parrish) and attempted to rekindle their short-lived romance. As he was trying to get in his ex’s good graces, Mike found out Mona had bought whistles for all the girls at schools as a way to make them feel safe with Ali’s (fake) kidnapper on the loose.

Despite sleeping on her latest suspicions about Jason, Spencer started the morning by rummaging through the DiLaurentis trash cans and found a paper bag with a New York deli address on it that Jason threw out when they saw him the night before. Emily and Spencer then theorised that Jason and Jessica may have known all along that Ali was alive and perhaps they’d been trying to cover up Jessica’s part in Ali’s ‘murder’. The two girls took their latest find to Ali and discussed the disappearance of her mother.

Sleep didn’t do any good for Aria who was still plagued by what she’d done and that violin music which had somehow made it onto her iPod. The paranoia sent her on a one-way trip to crazy town as she started to help Ali cover up her latest lie by making it look like she had ben hiding out in the woods as she’d told Holbrook.

Throughout the morning Ashley began looking through Jessica’s emails and Hanna managed to get a few sneak peeks finding an email Jessica sent to an unknown person saying she couldn’t protect them anymore. The plot thickens!
Toby (Keegan Allen) returned from his trip to London and told Veronica and Spencer that in his search for Melissa all he found was Wren (Julian Morris). More lies from Melissa?! On her mother’s orders Spencer was told to stay close to home so she got a bit up-close-and-personal with Toby which didn’t require her leaving her bed.

Tensions at the DiLaurentis house reached boiling point with Kenneth and Jason arguing about Jason’s need to mysteriously go to Philadelphia before Emily arrived to return Ali’s new dog Pepe. Hanna then arrived to give Kenneth some details about where Jessica could be. As they left the house Hanna told Emily what she’d found in Jessica’s emails and moments later Jason was banging on the car window telling them to stop sticking their noses into other people’s business. Not listening to a word he said they followed him into town where they saw him pressing a buzzer at a doorway. When he left they went to investigate and were spooked by a creepy man which prompted them to make a quick exit.

Aria’s struggle to keep it together was dealt another blow when she arrived home to find Mike and Mona getting cosy once again. As soon as Mike was out of earshot Mona let Aria know that she knew all about New York and Ezra’s shooting.

Speaking of Mona she enjoyed a tense confrontation with Ali as Ali visited her own grave. A tearful Ali tried to convince Mona that she needed her as a friend but Mona was having none of it. She admitted she sent her the text message and was going to make her regret coming back from the dead.

Aria, Emily and Hanna got together to catch up on the latest events and Spencer popped next door to sneak Ali out. Jason was in the DiLaurentis house and Spencer saw the moment as an opportunity to press him on why he was in New York. Before he could answer Pepe’s barking got everyone’s attention and the girls discovered Ali’s new dog had found the body of Jessica in the back yard. With police swirling everywhere and Ali looking on upset the girls realised that their lives would never be the same again.

Pretty Little Liars continues Tuesdays at 8/7c on ABC Family in the US.