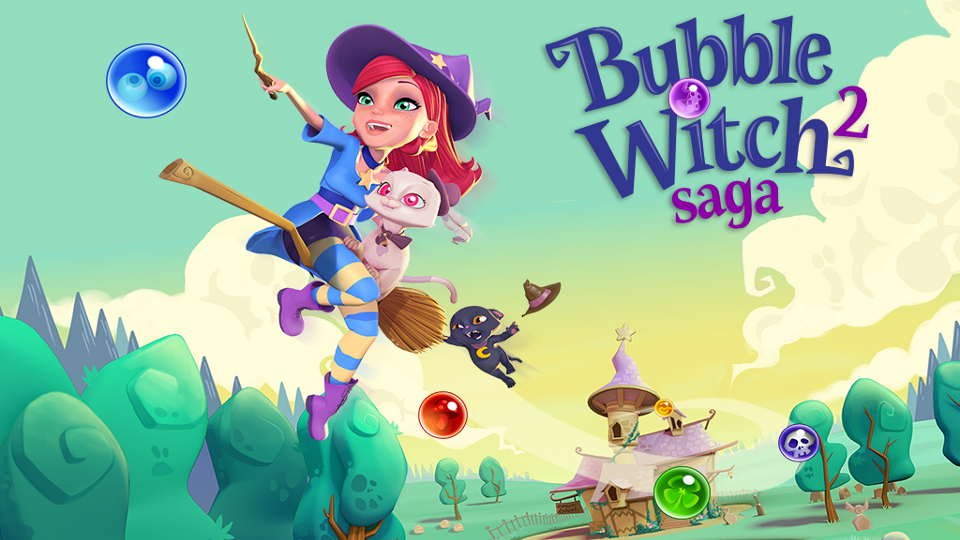 King have really made a name for themselves with their Saga games over the past couple of years. We’re not sure if they’ll ever top Candy Crush Saga but they’ve definitely been trying hard with Papa Pear Saga and most recently Farm Heroes Saga. Now they are revisiting Bubble Witch Saga with a sequel. We’ve been spending time with the iOS version to see if it’s worth your time.

Bubble Witch Saga, for those who haven’t played it, is strongly influenced by Taito’s Puzzle Bobble with elements of Peggle thrown in. For Bubble Witch Saga 2 it’s clear that King have applied their experience from the past couple of years. They have kept the core game mechanics, added some new elements and given the visuals a complete makeover.

The graphics of the first game were a bit gothic fairy tale and rather dark. The sequel is more in line with their other games with bright colours and cartoony visuals. Everything feels a lot happier, more fun and the interactive elements are bigger making it easier to play as well.

The first game had a single level type where you simply had to fire bubbles up the screen. The aim was to clear each screen by popping the bubbles at the top of the level. This time around the game features a little more variety with 3 level types – Clear the Top, Save the Animals and Free the Ghost.

Clear the Top is pretty much the same as the first game where you must pop 6 bubbles on the top row to beat a level. Save the Animals is much the same but throughout the level you come across animals trapped in bubbles. Free the Ghost puts a ghost in the middle of the level surrounded by bubbles. Shooting a bubble caused the level to rotate so you need to be a bit more careful when planning your shots.

Popping bubbles requires you to match 3 or more of the same colour. The neat thing is that you can bounce your bubbles off the sides of the screen allowing you to pull off some tricky shots. Successive bubble pops summon spiders which act like pinball bumpers to boost your score. Missing shots causes some spiders to disappear.

At the bottom of the screen are five cauldrons that each have a score linked with them. It’s impossible to land bubbles in the ones you want so there’s a certain amount of luck involved in getting a high score. This can lead to some frustrations on the trickier levels.

Like all of King’s games it starts off incredibly easy and you’ll fly through the first 20 or so levels. Along the way you’re introduced to the special bubbles that you can buy via in-app purchases. These make it easier to clear levels but relying on them can get expensive.

The first level we had trouble with was level 24 and it took us a few tries to get past it. The game gives you five lives to play that slowly regenerate over time. If you run out of lives then you either have to wait a while for another or purchase more.

The in-game currency is gold bars which you can buy in stacks from 10 at £0.69p up to 650 for £34.99. Five lives costs 12 gold bars and this is also the same if you want to buy five extra bubbles. When the difficulty ramps up the game feels like it forces you to rely a bit too much on luck. It’s easy to be tempted by the optional microtransactions which can become expensive if you’re not careful.

We had some issues with the game which we presume are bugs that will get ironed out in the next update. At times the game hangs for between 30 seconds and 3 minutes which is frustrating. It mostly seems to do this when you beat a level. More annoying though is that the game managed to forget our progress on a number of occasions forcing us to replay a bunch of levels.

Overall Bubble Witch Saga 2 is another great game from King that can be hard to put down. For short play sessions it’s great but the limited lives can become frustrating. Fans of the original and other King games should check it out.