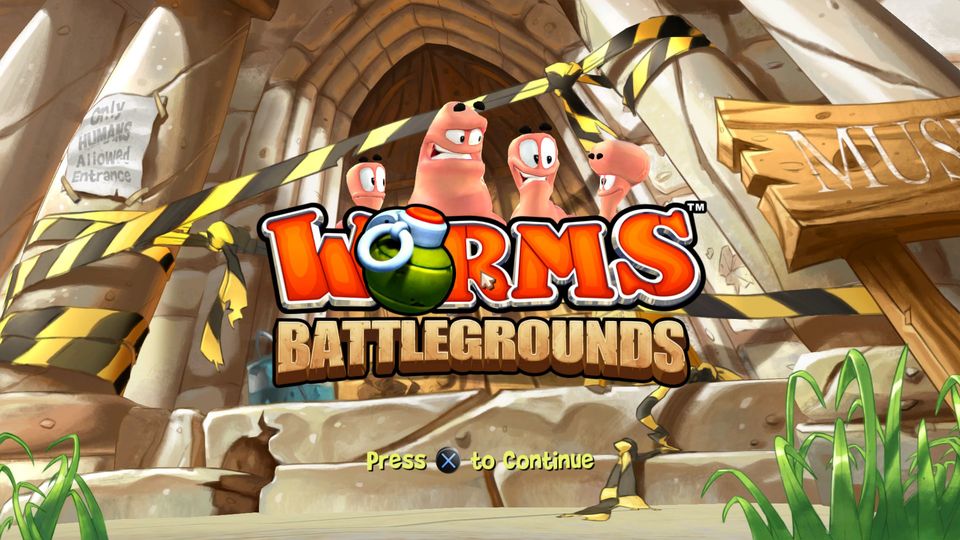 We’ve been playing Worms games for almost 20 years since becoming hooked on the original on the Commodore Amiga in 1995. Since then the belligerent pink annelids have sprung up on almost every platform from home computers to consoles to mobile devices and even Facebook. We’ve been spending some time with Team 17’s latest addition to the series – Worms Battlegrounds.

Worms Battlegrounds is essentially a rebadged version of last year’s PC release Worms Clan Wars. Not a great deal has changed other than to bring the game to Xbox One and PS4 for the first time. We’ve been taking a look at the Xbox One edition.

Before you get stuck into the multiplayer it’s worth tackling the offline Story and Worm-Ops modes. These are humorously narrated by Katherine Parkinson (The IT Crowd) as the fictional Tara Pinkleton. She’s a spoof on Tomb Raider’s Lara Croft and is an adventurous crypt robber who likes to steal precious artefacts while causing large amounts of destruction.

Story mode takes places in a museum and the 25 missions are set in five different exhibits – Prehistoric, Viking, Inca, Industrial Revolution and Feudal Japan. The story is mostly nonsense but tries to give a reason for proceedings. Ultimately you’re trying to recover a Stone Carrot from an evil hypnotist.

These missions start simple but get quite difficult as the game aims to introduce you to all the different elements. This mode isn’t just about killing enemy worms but also has you rescuing friendlies and solving light puzzle elements. Many of these new puzzle elements are possible thanks to the new physics based contraptions. In addition to Story mode you’ll also find 10 time-attack style Worm-Ops missions. These again exist to teach you more about how to play the game but are fun while they last. These modes also help you get used to the gamepad controls which work really well.

The environments in Worms Battlegrounds are rendered in a cartoony 2.5D style and they look lovely. They are 30% bigger than in previous games and they also now feature day and night cycles. Dynamic water has been improved and adds plenty of fun and unpredictability. The bundled editor allows you to build the levels of your dreams with a little effort.

The classes that were introduced in Worms Revolution return in Battlegrounds. These have seen some tweaks and improvements to make them stand out more. The Soldier is the most standard class who can remotely detonate timed weapons and has a higher chance of landing critical hits. The Scout is the weakest but most nimble class who can move faster, jump higher and tunnel further than the others as well as see inside weapon crates. The Heavy is the biggest and strongest class capable of inflicting large damage even as he dies. Finally the Scientist is the support class who can buff and heal.

A large part of the hilarity of Worms comes from the outrageous weapons on offer. Battlegrounds is no different and boasts an impressive 65 weapons and utilities available to you. 10 of these are brand new and include the Mega Morter, Gravedigger and Winged Monkey. Arguably our favourite of the new weapons though is the Teleport Raygun which makes it really easy to manoeuvre around the levels.

Multiplayer is still the best mode in Worms and this can be played on or offline. When playing online you have the choice of playing a quick match, ranked match or against a friend. You can also tweak the match settings to your preference if you desire.

Battlegrounds also features clan support allowing you to group up with friends. The clan leader can design an emblem and manage the other players. Clans can enter into an online league to compete against other clans. If the game can attract the players this could well turn into a new eSport.

New for the Xbox One edition is the addition of a SmartGlass companion app that allows you to keep track of your stats during play. PS4 gamers get some exclusive features too. The Touch Pad on the DualShock 4 can be assigned up to four weapons for quick selection. The Light Bar on the controller will also dynamically change colour based on what is happening. For example it will glow red during attacks and explosions, blue when your worm is in water and green if your worm gets poisoned. There’s also a companion website to track your stats.

While Worms Battlegrounds is more of the same it’s great to see the series available on the next-gen consoles. Chances are you already own a few Worms titles but if you haven’t picked one up for a while or are completely new to the series this is well worth your time.

Advertisement. Scroll to continue reading.
In this article:Battlegrounds, PS4, Team 17, Worms, Xbox One