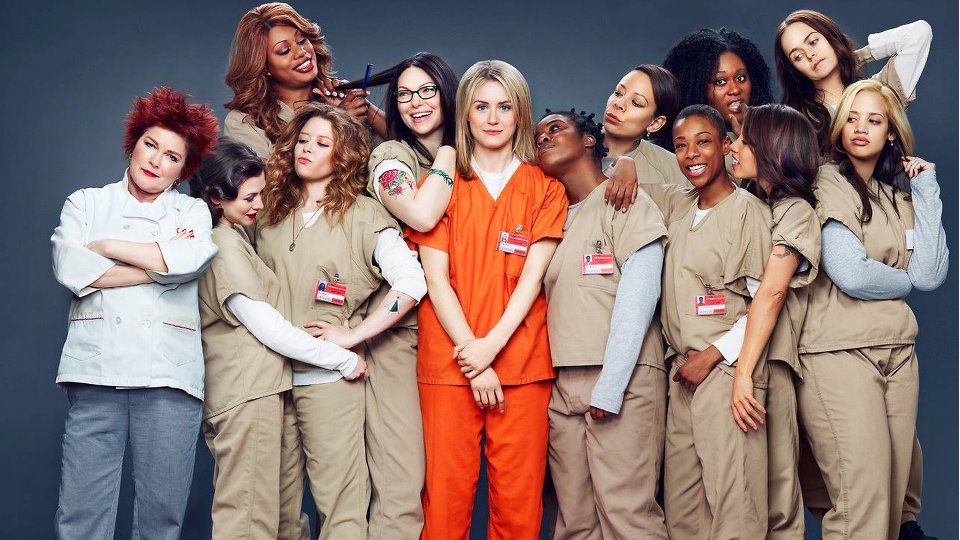 Netflix show Orange is the New Black debuted last summer and word of mouth ensured that the show soon became a big hit.

If you haven’t seen the first season of Orange is the New Black and don’t want any spoilers we recommend you stop reading now. If you have seen it and want to hear our thoughts on season 2 keep reading.

Based on the true story of Piper Kerman, the show tells the story of Piper Chapman (Taylor Schilling) a bisexual woman who is imprisoned for a crime she committed 10 years earlier with her girlfriend Alex (Laura Prepon). Now engaged to Larry (Jason Biggs), Piper’s world is turned upside down when she is sentenced to 15 months in prison and discovers her ex-girlfriend is one of her inmates.

Over the course of the first season Piper had to toughen up and learn to deal with life inside the prison system. The show also gave us snapshots of what Piper’s life was like before her incarceration and ended with a bloody fight with Tiffany ‘Pennsatucky’ Doggett (Taryn Manning). You could say the future isn’t looking bright for Piper…

Ahead of the second season we’ve compiled a list of the 10 things we want when the show returns:

1. Pennsatucky to be alive. It really could go either way following the rather nasty fight that took place in the season one finale. For Piper it would be better if Pennsatucky lived in terms of changes to her prison sentence because if she killed her there would be no getting out in the foreseeable. Pennsatucky is a good adversary for Piper and Taryn Manning plays her really well. She’s been absent from all of the second season marketing but we’re sure that’s just so the outcome of the fight isn’t ruined.

2. Miss Claudette (Michelle Hurst) to return from maximum security. The seemingly serene but quietly deadly inmate was last seen being dragged off to maximum security after assaulting a guard following the denial of her appeal. The show won’t be the same without her and there’s plenty more to explore with the character.

3. The return of Pornstache (Pablo Schreiber). The corrupt and probably crazy prison guard was put on leave after he was caught having sex with Daya (Dascha Polanco) after being set-up by Red (Kate Mulgrew). Whilst he’s a completely vile character he does provide plenty of entertainment. We expect him to comeback with a vengeance as he doesn’t like anyone to get one over on him.

4. Daya and John (Matt McGorry) to find a way to happiness. This is going to be a tough one especially given Daya’s betrayal (well in John’s eyes anyway) when she was trying to protect him. Daya is pregnant with his child and of course the discovery of that would lead to a ruined career for John. The scenes between these two characters are always sweet and we hope there’s a lot more of them in the new season.

5. Piper to make some tough choices. The first season was obviously a tough one for many reasons and Piper found herself caught between Larry and Alex. By the end of the season she found herself without both of them and she’d discovered that Alex was the reason she was in prison. We saw Piper getting tougher as the season progressed so now she now to follow through and make some choices. Does she want to win Larry back or is she still in love with Alex?

6. Red to get her kitchen back. The former kitchen Queen got a taste of her own medicine when she lost the kitchen and then felt the wrath of Mendoza (Selenis Leyva) after causing a fire which injured Murphy (Abigail Savage). Red has some serious bridges to build but we suspect her pride may stand in her way. She’s also going to have to deal with Pornstache if he returns and discovers she was part of the setup which led to his downfall.

7. Morello (Yael Stone) and Nichols (Natasha Lyonne) to sort things out. The two characters had an on/off sexual relationship in the first season with Morello eventually breaking it off for good. That led Nichols to turn her attention to Alex but we don’t think that’s a match that will last long. We like Morello and Nichols together but Morello will have to deal with her issues, including that little stumbling stone of having a fiancé.

8. More Sophia (Laverne Cox). The transgender inmate is one of the most interesting characters in the show and we hope to find out a lot more about her in season two. She begun to form a friendship with Piper and had a lot of demons to face in the first season. We’re hoping for more of her backstory and more insight into her family life particularly the relationship with her son.

9. Crazy Eyes’ (Uzo Aduba) back story. We don’t know a whole lot about Crazy Eyes aka Suzanne Warren other than her tendency to become a bit of a stalker when she takes a shine to someone. By the end of the first season we discovered she wasn’t all that happy with being referred to as Crazy Eyes. We want to know much more about the character and see her integrating more with her inmates.

10. Sam Healy (Michael J. Harney) to get his comeuppance. The older prison guard turned against Piper quite dramatically by the end of the first season as it was revealed he had a deep-rooted issue with lesbians. Flexing his power a little too often we hope that he is exposed in season two and punished for his wicked ways.

Orange is the New Black season two will be available on Netflix from 6th June 2014.

In this article:Orange Is The New Black