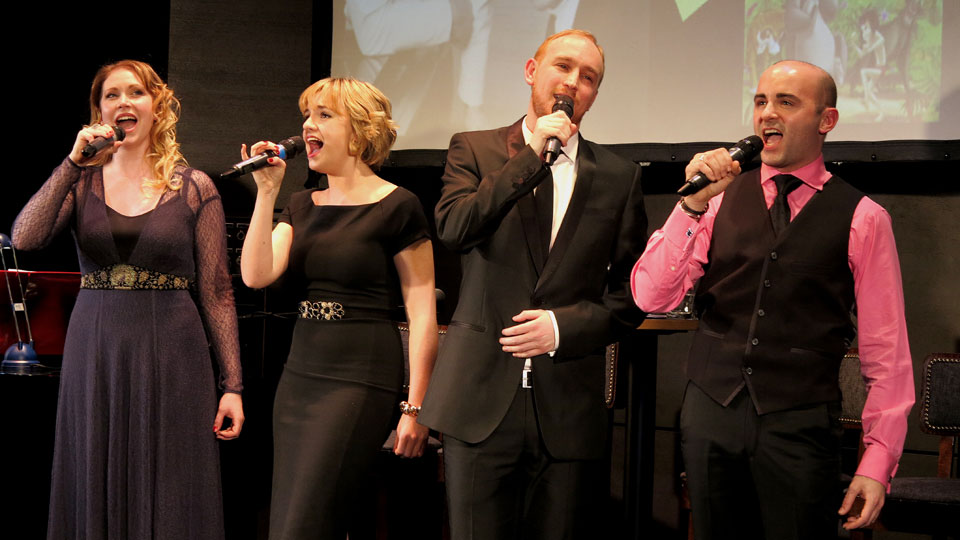 A Spoonful of Sherman is a celebration of the absurdly talented Sherman family’s musical legacy, which over three generations, has bewitched cinema and theatre lovers for seven decades.

The evening is hosted by Robert J Sherman, the son of Robert and grandson of Al Sherman. His father, Robert Snr, wrote with his uncle Richard the songs for Mary Poppins, Chitty Chitty Bang Bang and Disney’s The Jungle Book amongst many others. His grandfather Al wrote upbeat hits that formed the soundtrack to the 40s and 50s. Now Robert Jnr has written his own musicals. A Spoonful of Sherman takes you on a chronological journey through the three generations of Sherman songbooks, from the 1940s to the present day.

The staging is low-key, and this works well in the intimate, cabaret-style venue of the Studio at the St James Theatre. Robert J Sherman is an affable host, full of quick-witted asides (especially when one of the singers accidentally lowered the age in the lyric “you’re sixteen and you’re mine”). He is joined on stage by four top-class musical singers: female vocalists Emma Williams and Charlotte Wakefield, with male vocalists Greg Castiglioni and Stuart Matthew Price. Musical director Colin Billing faultlessly knocks out the tunes on piano, though there is no orchestra – this is stripped back frill-free entertainment for you to sit back, relax and enjoy. Projections provide context, with images from the family albums accompanying the songs. The evening is warm and personable, and a laid-back feeling is maintained, allowing the songs to do the talking.

The subtitle “the songbook of your childhood” is likely to be true whether you’re a grey-haired kid or still putting a carrot out for Rudolph. The songs on offer are timeless classics, many of which have left indelible impressions on childhoods over the last half century. The Al Sherman songs may be less familiar to younger audience members (though for Sinatra enthusiasts – there’s a rarity: he sang There’s a Harbour of Dreamboats on a regular basis but never recorded it owing to industrial action!), but cheery hits like You’re Sixteen and Let’s Get Together hit all the right marks with those of a certain age.

The most familiar songs will be from the Robert and Richard Sherman collaborations. Nobody’s childhood is complete without knowing A Spoonful of Sugar, Feed the Birds and, of course, Supercalifragilisticexpialidocious. There’s also a Winnie the Pooh medley and songs from the Jungle Book, as well as other hits from beloved movies such as The Age of Not Believing, which was written for Bedknobs and Broomsticks; and Suddenly it Happens from The Slipper and the Rose.

One of the reasons A Spoonful of Sherman charms the pants off audiences is that the quartet works so well together, but they’re all given their moments to shine and take their solos with aplomb. Robert J Sherman steps out of his role as narrator to occasionally usurp Colin Billing at the piano, and tickles the ivories with a fair degree of flair. River Song, a piece written for him by his father, was especially affecting, and one of the emotional highlights. Robert Jnr, if he was minded to, could do his own one-man show.

If you love the joyous music of the Sherman family, you’ll love A Spoonful of Sherman. It’s a fitting tribute to timeless songs and it’s performed with skill and passion. Robert J Sherman makes for a genial and charismatic host. Catch it whilst you can.