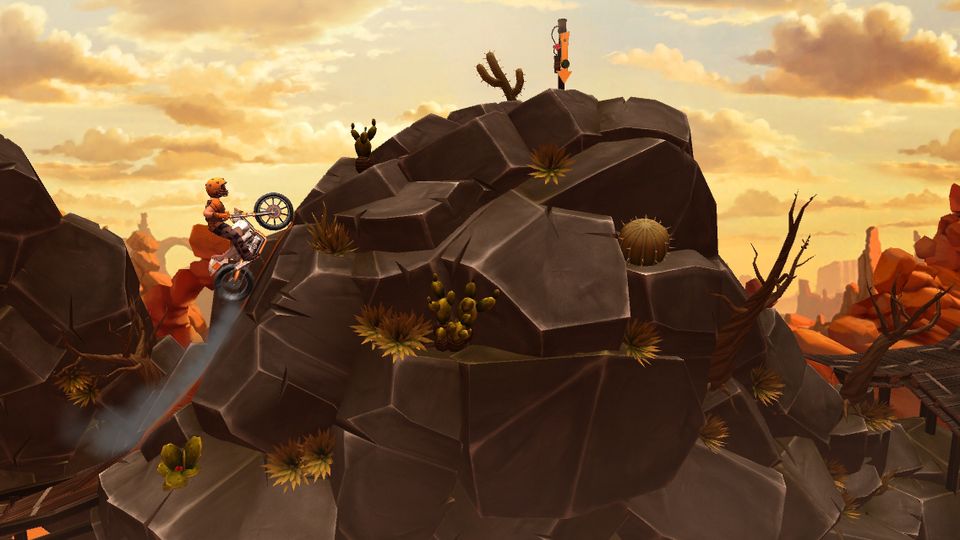 Ubisoft have announced that Trials Frontier, the free-to-play mobile title from RedLynx and its Trials series, is now available only on the App Store. The series’ first appearance on mobile devices, Trials Frontier transports players to the distant future where they find themselves the newcomer in a run-down town desperate for a hero.

Players will practice their skills, learning how to race, flip and cruise through tracks as they earn new gear for their bikes and complete missions for the townsfolk in order to prepare for a face-off with the town villain, Butch. As players progress through the game they will unlock new maps, tracks, bikes and fine-tune their racing skills.

Trials Frontier will receive regular post-launch updates that include new bikes, missions and the introduction of infinite multiplayer brawls to keep players competing and racing on the newest bikes. Stay connected with friends through time challenges, leaderboard sharing capabilities and social network integration to prove who has the fastest time.

Players can connect Frontier with Trials Fusion, coming out April 16th on console and April 24th on Windows PC, to gain access to bonus rider gear and see what some of the tracks looked like in their prime.

EF will be bringing you a full review of the game soon. Check out the official Trials website for more information.

Greg Ellwoodhttp://www.entertainment-focus.com
Greg is the Deputy Editor of Entertainment Focus. He writes about Games, Tech and TV. You can find him on Xbox/PSN/Steam as Tahllian.
Previous article
Logitech reveal Illuminated Living-Room Keyboard
Next article
Child of Light unveils unique artistic partners

‘The Captain is Dead’ blasts its way on PC and mobile