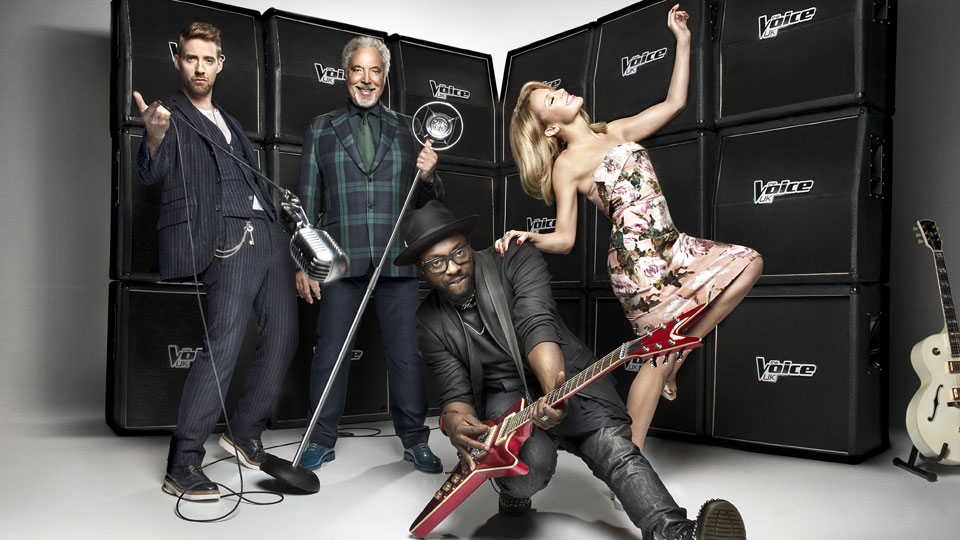 The final of The Voice series 3 began with a typically explosive collaborative performance of Primal Scream’s Rocks from the esteemed coaches. Tom Jones, Kylie Minogue, Ricky Wilson and will.i.am looked equally stunning in glittery jackets and shimmering dresses (Kylie), as did the finalists, who had a couple of interesting costume changes between performances.

Up first tonight was Team Ricky’s Christina Marie, who gave a powerful performance of Coldplay favourite Fix You amid a flood of gothic candles. The Bristolian’s effort was praised by Tom Jones as ‘wonderful’, whilst Will described it as ‘impeccable’. The 20 year old later teamed up with her dapper looking mentor, to sing Kaiser Chiefs’ track Coming Home.

As the oldest remaining competitor, Sally (54) covered Joni Mitchell’s Both Sides Now beautifully, prompting mentor Tom Jones to exclaim ‘she could sing Bah Bah Black Sheep and it would move me!’ It was almost as if the great singer herself had graced The Voice with her presence.

Sounding as if they’d spent years collaborating, Sally and her coach then covered soft rock singer Marc Cohn’s Walking In Memphis, proving that the two really do have chemistry as they sizzled away together on stage.

Jermain got off to a slightly shaky start, but soon found his voice as he covered wonder hit Wrecking Ball. Thankfully, we were spared any naked entrances, as the Hackney based singer appeared fully clothed to make the song his own, making the audience sway with arms aloft. As Will rightly stated in his critique, it was a ‘challenging song for a guy to sing, which takes balls.’ Jermain certainly stepped up, adding deep vocal twists to expertly demonstrate his expansive range and sneaking in those extended notes we’ve come to expect from him.

In typically eccentric fashion, Will halted the show to take a call from former collaborator Cheryl Cole, who hailed Jermain’s performance as amazing!

Jermain’s duet with coach Will was, by far, our favourite of the night. Magical happenings set to their own unique version of Pure Imagination, from film Willy Wonka and The Choclate Factory, succeeded in livening up the competition enormously.  It was a bizarre turn of events which made us feel as we’d spent a few minutes in Will’s wonderfully batty mind.

Missing You was Jamie’s first song tonight. His natural aptitude for performing was evident, whilst his confidence shone through, absent of arrogance.  His ardent performance had the crowd on their feet and support in the way of his family clearly helped to spur on the youngster. Tom expressed his admiration saying, ‘I wish I could swear on this show because you sang the F out of it!’ When Kylie performed Eurythmics’ Angel with her star pupil Jamie a little later, it proved to be, not only a heavenly combination, but also a fantastic choice of song for the duo.

Special guest appearances on the series finale included Paloma Faith, singing her recent single Can’t Rely on You, and Aloe Blacc treated us to his latest offering, a reworking of Elton classic Your Song, entitled The Man, complete with gospel choir and live musical accompaniment.

In a shocking turn of events, talented teenager Jamie Johnson was the first finalist to be booted out. Described tonight as ‘the male Kylie’ Jamie expressed his sincere thanks for all of the Australian pop princess’ guidance.  Ricky commended the adolescent’s character, hailing Jamie as ‘a really nice guy’; whilst Will told him ‘you are one step closer to realising your dream’.

For her last chance to impress, Christina Marie sang Spandau Ballet classic The Power of Love. Carried out with gusto, the confident singer gave it her all from the off, and deserved every ounce of the acclaim that followed.

Sally’s rendition of Olly Murs’ Dear Darlin’ proved mesmerising. The Leicester native delivered the song drenched in emotion, prompting Will to brand her performance ‘enchanting’.  Having been earlier described as ‘a cool cookie’ by Emma, Sally’s nerves never showed and she managed to perform every song without a single wobble.  Impassioned by his act’s performance, Tom exclaimed ‘she touched me and I hope she touched you’, which raised a giggle from the audience.

Jermain sealed his seemingly inevitable fate with a faultless rendition of And I Am Telling You, as made famous by Jennifer Hudson in Oscar winning film Dreamgirls.

With viewers allowed to cast their votes online this year, there was absolutely no excuse not to make that vote count.  The votes culminated in a deserved victory for Team Will, as Hackney native Jermain Jackman was crowned winner of The Voice UK 2014.  Clearly overwhelmed, a joyously teary Jermain was joined by his fellow contestants for a final routine as the programme drew to a close.

In this article:Jermain, The Voice UK