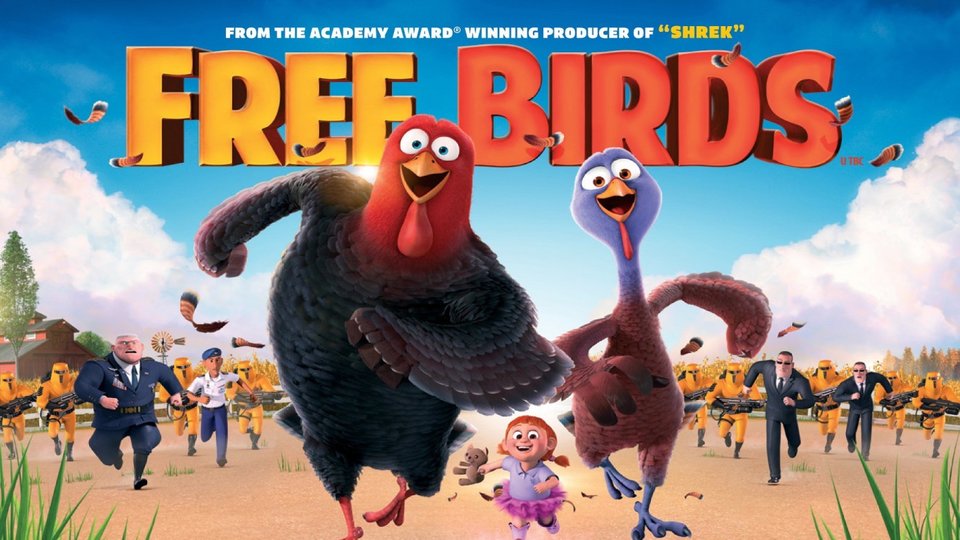 Fed up of being the food of choice for the Thanksgiving tradition, turkeys decide to fight back. Recruiting loner Reggie (Owen Wilson – The Internship) to their cause, the turkeys plan to rewrite history. All they need to do is go back in time to the first ever Thanksgiving and get fowl off the menu.

The humble turkey is frequently ridiculed and so often made the punchline in jokes. But now they are making a stand! With Thanksgiving their most feared holiday, turkeys are mounting a preemptive strike. Free Birds has a great and novel concept that guarantees frequent laughs as our hapless heroes look to rewrite history.

Owen Wilson leads the line well as Reggie. No one plays affable quite like him and he really is the perfect choice to take charge of this adventure. His buddy-banter with the clueless Jake also makes the film a success. Woody Harrelson gives the soldier-turkey much more substance than just a conventional sidekick and is frequently the best thing in the movie.

Director, co-scripter and vocal talent Jimmy Hayward has done a remarkable job giving this uniquely irreverent storyline plenty of good comedy. Perhaps his greatest achievement is getting the balance just right between humour for the kids and the grown ups. There are so many time travel gags thrown in, any fans of Back To The Future and Bill & Ted will certainly have a chuckle.

Free Birds takes a novel concept and has fun with it. It may not carry the clout of a Disney production but it certainly has enough invention, comedy and quality to be a seasonal treat. There’s no doubt that your family will enjoy this fun adventure.