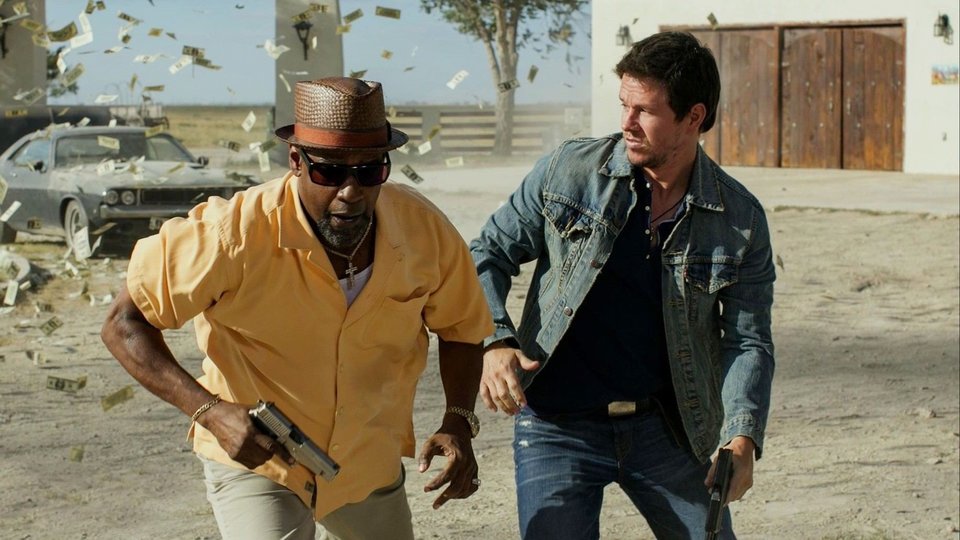 Bobby Trench (Denzel Washington – Flight) and Stig (Mark Wahlberg – Ted) are partners who find that they have both been double-crossed by their respective backers. With a South American drug cartel, the Feds, the Army and the CIA all after them, it’s left to Bobby and Stig  to work out who is behind their double cross whilst staying alive long enough to serve payback.

2 Guns looked like it could be just another big concept idea that would fall victim to it’s high profile cast. We’ve seen it before but thankfully that’s not the case here. 2 Guns is one of the sharpest, wittiest and most fun movies you’re likely to see this summer, with two amazing lead performances that’s worth the price of admission alone.

Denzel Washington really is the only man that could have given the character of Bobby Trench the guile and style he oozes onscreen. With cool charm and assured confidence, ‘I know a guy Bobby’ is a joy to watch. It’s also nice to see him tackle such a wildly different role to his Oscar worthy turn in Flight earlier this year.

In Mark Wahlberg, Washington has the perfect foil. A completely different character but equal in his own right, Wahlberg brings his now trademark comedy to the role, paired with his all-American, good ol’ boy charm (his winking at a waitress is a particular highlight). Washington and Wahlberg nail the chemistry right off the bat and that’s the biggest reason why the film works so successfully. Their banter feels genuine and fresh whilst both easily sell the action side of the movie.

The film has a great collection of larger than life characters and stunning performances to match. Bill Paxton is scary as hell as a dogged and crooked CIA operative. Miami Vice and Battlestar Galactica legend Edward James Olmos is on hand for some quiet menace as a South American crime-lord and James Marsden is convincing as an Army officer with a secret agenda. Throw in the ample charms of MI:4 babe Paula Patton and you have one of the years best ensembles.

2 Guns has a clever script that constantly keeps you hooked. There is plenty of comedy on show and the plot allows for plenty of memorable moments, a lot of which were improvised. That’s a sure sign of a special project – when the creativity of the method cultivates such hilarious and unforgettable moments like when Mark Wahlberg is talking smack to a bunch of gun-runners trying to shoot the heads off chickens.

2 Guns is explosive action at its popcorn-munching best. With a great cast, a sharp and biting script and some impressive set pieces, this comes out as one of the better summer movies in a season of big budget disappointments. It has style and structure and knows how to use it. But perhaps its most rewarding quality is the fact that it renews your faith in the buddy-cop movie – a sub-genre that we all thought Hollywood didn’t know how to make any more. Thankfully 2 Guns proves that it can still be done right.