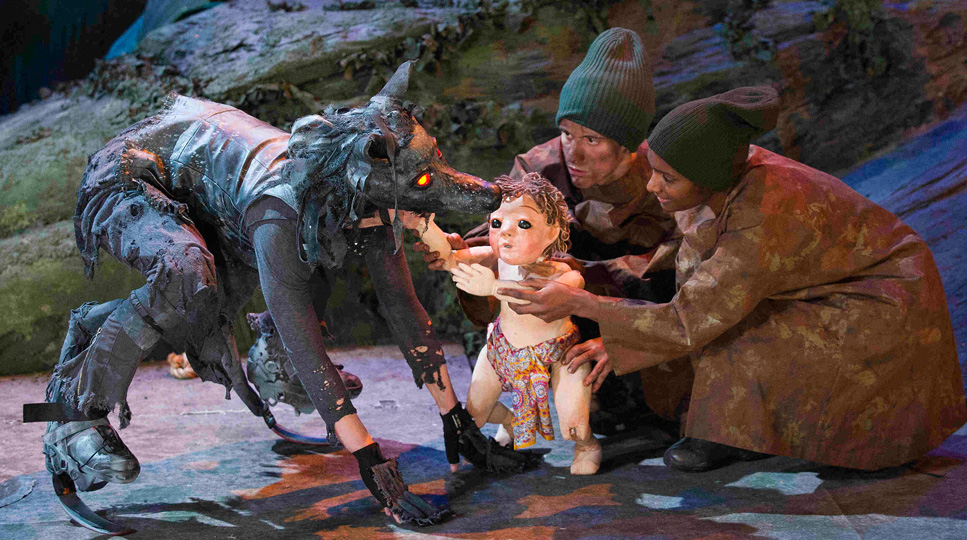 The West Yorkshire Playhouse offers up an alternative Christmas treat this season with a bold adaptation of Rudyard Kiplings’s The Jungle Book.

Set in the Indian jungle, the story follows the journey of runaway infant Mowgli as he is raised by Akela the wolf, Baloo the bear and Bagheere the panther. Learning the tongue of wild animals and their relationship with the nature of the jungle, the boy grows up at one with the wild. As a young adult he is reunited with his mother and the culture of mankind, but finds enemies in this new world whilst also facing the a duel he’s been evading all his life: a battle against the king of the jungle, Shere Khan.

The play has a large ensemble cast, each costumed in colourful representations of the creatures they depict. Daniel Copeland’s Baloo is particularly enchanting, exuding warmth and strength in his performance. The rakish Oliver Hoare also stands out as bounding jackal Tabaqui, using shortened crutches for forelegs. Jan Knightley’s Akela, leader of the pack, demonstrates an equally impressive style of movement, though the style of mask worn somewhat shrouds his facial expressions. The show is carried by Jacob James Beswick as Mowgli, demonstrating an inexhaustible athleticism throughout. Often bounding on all fours and ascending ropes at great speed, Beswick constantly commands the audience’s attention and successfully evokes a freedom of movement on the stage – which although vast, is still somewhat constrained. Beswick presents Mowgli as both sensitive, cheeky and adventurous and is an excellent protagonist for children to associate with.

The inspired decision to use British regional accents throughout the play works reasonably well on the whole, with a predominance of Yorkshire dialects inflecting variances in class and wealth upon characters. However, the positioning of bejewelled monkeys in the role of what many would consider ‘chavs’ arguably sends out a mixed message.

Stage presentation in The Jungle Book is wholly innovative with a rich depth of scale and texture. Subtle lighting and continuous sound effects evoke the jungle and Indian climate vividly, whilst the use of a number of puppets throughout add a wealth of movement and life to the world on stage. A particular triumph is the realisation of the baby Mowgli, performed and voiced by two unconcealed performers.

Whilst the musical numbers are evocative of the jungle setting, with pounding drums and staccato rhythms, the tunes are on the whole forgettable and lack a strong central theme. Pleasant enough on the whole, the music takes something of a backseat in proceedings and feels rather more like an underscore. A slightly disappointing realisation of some of the creatures also causes their dialogue and singing to become indistinct in places, further flattening the impact of the music. Let’s also be realistic: The Jungle Book is aimed at a younger audience, one who will no doubt be familiar with Disney’s animated adaptation. Not only is Disney’s version a superb film, it also features iconic music which other adaptations rarely compete with. It’s unfair to compare this stage version to a film classic, but in terms of audience expectation the inevitable comparisons are going to be made. As such, the music and story do feel paler than the film version. It is, however, likely that the immersive nature of live theatre will overcome the comparisons which possibly overshadow it.

The big question is how does this play resonate as family theatre? Whilst lacking in the humour which often entertains the parents at such events, the action, adventure and sheer spectacle of the staging is perhaps enough to sate the needs of children. I asked a seven year old boy if he was enjoying the experience, and his reply was an enthusiastic: “Yes! Mowgli is cool.” Equally, a number of departing children were animated by the adventure depicted on stage, describing it as: “The most amazing thing I’ve ever seen.” As such, The Jungle Book seems geared precisely towards a younger audience, often the most unforgiving audience of all.

The Jungle Book is a bold and daring journey of a show. Its scale is commendable and elements of its physical performance are superb. Whilst it does have its shortcomings, it is a worthwhile and highly rewarding theatrical experience, showcasing what the West Yorkshire Playhouse does so well; daring to experiment with new ideas and further the concept of theatre. The Jungle Book opens up new vistas of the imagination, presenting a refreshingly different treat for families this Christmas.