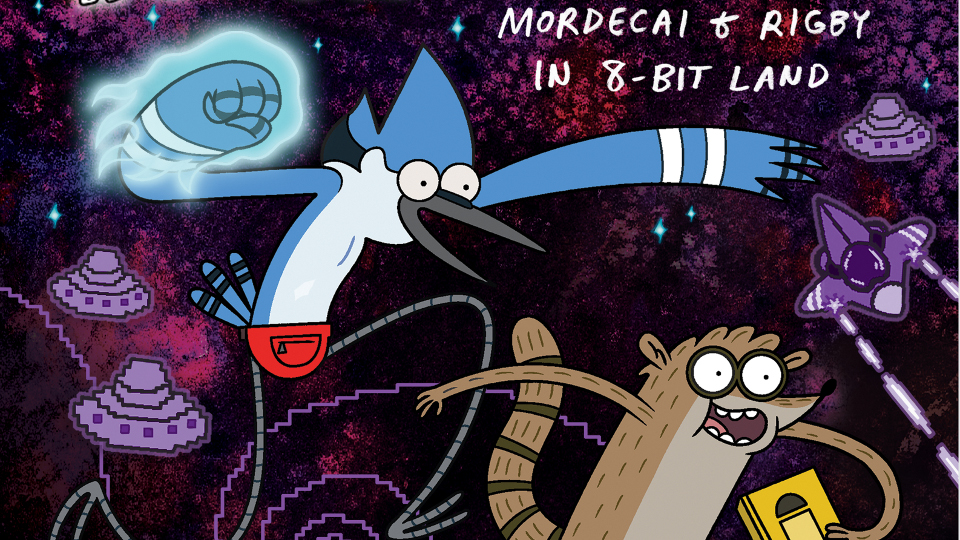 You may not have heard of Mordecai and Rigby or their animated series Regular Show which airs on Cartoon Network. It’s been around since 2010 and follows the two friends – Mordecai is a blue jay and Rigby is a racoon – as they go about their daily lives. With its insane sense of humour it has become rather popular and thanks to Wayforward the pair now have their own game too.

Despite being a game based on the TV show it really doesn’t matter if you’ve seen it before or not. Fans will probably be the main people who buy it but there’s actually very little in common with the TV show.

The game starts off with a simple story where the friends receive a mysterious games console in the post. Excitedly they plug it in and fire it up and find themselves transported inside. The only way to escape is to battle through four different game worlds.

The first world is based around 2D platforming with the simple goal of getting to the end of each stage. Players take control of Mordecai but the press of a button switches to Rigby. The reason for this is that each has their own abilities. Mordecai can double jump and Rigby can crawl through narrow passages. The game requires you to often switch between them in order to progress and this can even be mid jump.

An interesting twist is that each world also features its own take on a different genre. In the second world Mordecai and Rigby can change into spaceships in certain zones. The third world introduces a top down view of the action. The final world features all three styles of play and at the end of each world you must defeat a boss.

On paper it all sounds rather interesting and the mix of ideas have a lot of potential. Sadly the developers have made some really odd design decisions and those ideas haven’t been particularly well implemented. For example on the platforming levels there seems to be no thought to how things are laid out. This kills the nice flow that you find in great platforming games. Another example is that the levels try to encourage you to explore in order to find hidden videotapes that unlock extra content. Working against the need to explore though is a countdown timer so the longer you take to get to the end the lower your score.

The biggest problem with the game though is that it’s unnecessarily difficult. Making a single mistake in a level often kills you and this usually means restarting from the beginning. There are very few checkpoints throughout the stages so you get to play the same sections over and over again. Many deaths also seem to be caused by really harsh collision detection. Simple tasks such as stomping an enemy or landing on a platform tend to kill you for no reason at all.

Regular Show: Mordecai and Rigby in 8-bit Land is a frustrating affair. The tough difficulty appears to only be there to prolong the experience. It’s probably too hard and frustrating for most players and those that persevere aren’t likely to feel all that satisfied when they do beat it. It’s a hard game to recommend even to fans of the show.