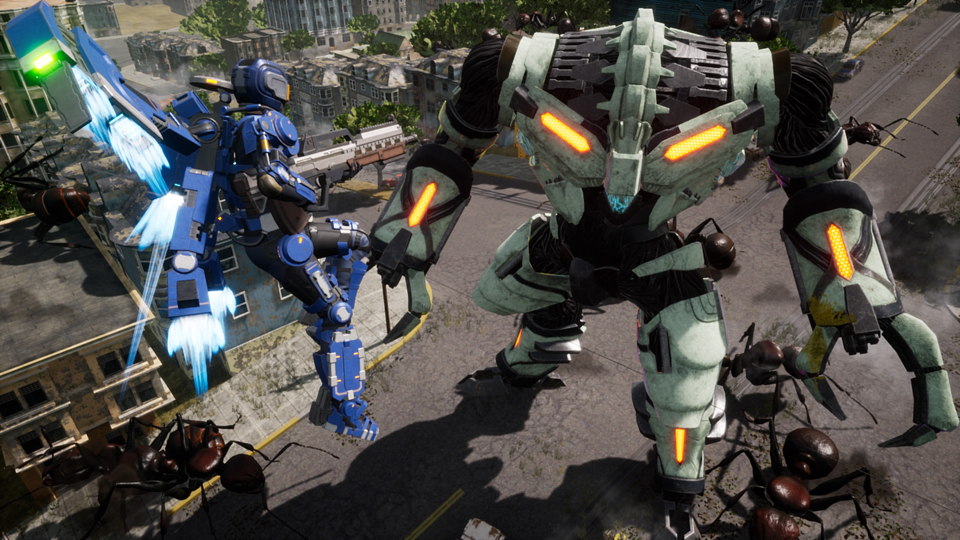 As a kid I would watch all manner of creature feature movies. Anything from Godzilla to King Kong, Critters to Tremors. One of my favourites was the excellent Starship Troopers. Shooting giants bugs until they turn into paste is awesome. I always had a eye on the Earth Defense Force series, it looked like cheap, dumb fun. So let’s see if Iron Rain scratches my bug killing itch.

From what I gathered, Earth is being invaded by the Aggressors, a race of aliens hellbent on turning our planet into a hive of their own. You carve your way through the battlefield and against all odds, destroy the mothership. After 7 years in a coma, you awaken to find the threat is back and more dangerous than ever. You join an elite team determined to evict the Aggressor threat.

I went in wanting a cheesy, B-movie feel and Earth Defense Force: Iron Rain did a pretty good job in delivering the tone I wanted. Your superiors talk over the radio in a generic and monotonous voice and your team-mates are a great variety of TV tropes. They whoop and holler and listen to cheesy pop music on the flight towards battle. Propaganda disguised as fun radio shows blare throughout the menus and it brings a light hearted tone to the game. The plot itself was quite weak, merely a device to move you level to level. It’s not going to stick with you and not going to engage you emotionally. It’s also lacking any real cutscenes, leaving no connection to the soldiers that accompany you. A game like this is all about the gameplay, so let’s see what Earth Defense Force offers us.

At its core, it’s a level based shooter. You are placed in a medium-sized map and enemies are placed strategically for you to complete the level. Every enemy is bigger than you and there are a wide variety of them. They vary from giant ants and spiders to huge robots and when I say huge, I really mean it! To tackle these creatures, you are given a plethora of weapons to utilise. Pretty much every style of firearm is here and there’s also a good amount of melee weapons as well. They don’t handle greatly and there isn’t any feedback from your shots but given the absolute chaos EDF throws at you, it’s easily overlooked. Aside from these weapons you have different classes to pick from. These really alter how you play, be it a run and gunner or one who flies through the air at breakneck speed.

If you are too overwhelmed, you have the choice to use “Overdrive” to heavily boost your abilities. Equipment is handled really well here, on completion of a level you are given money but using too much equipment will cause deductions from this reward. Enemies do drop health and the occasional Overdrive core, so strategy is important. I was really impressed with the amount of unlocks, each level you complete unlocks an incredible variety of armour, weapons and equipment to buy. While you can buy the majority of items, a lot of them require you to complete certain feats in battle. This gives you plenty of reason to revisit levels. There’s also more treats here, the levels are entirely destructible and using the explosions (all of which have several damage types) is an absolute hoot. An active reload system also keeps the momentum going but despite all this I did find the chaos a little too much at times. Enemies don’t decompose right away and given the size of them, they can fill up the screen quickly and make it hard to see what is happening. The shooting doesn’t feel great either, despite being fun. Overall I was really impressed with the amount of content and variety of enemies but after long sessions I was left very numb.

I wasn’t expecting anything impressive, visually. Good thing, because I was right not to be. It looks like an arcade game from several years ago. There is some nice lighting here but characters models and world design is very basic. On the performance side, things are great. Framerate is rock solid but is unfortunately marred by heavy screen tearing and bad frame pacing. This is when there are many, many creatures all around you and that happens very often. Voice acting is terrible and that’s a great thing. It feels like an overdubbed 90’s movie and it works perfectly. What lets this down is the sound design. Characters spout dialogue during intense battle and it’s completely distracting. Guns also sound really flat and I would have preferred some nasty sound bites for the creatures. The OST is decent enough, it has that arcade soundtrack you’d expect from a Japanese title and while not exactly memorable, does a decent job.

Overall I enjoyed this as much as I thought I would. The story is bare bones but that’s not really a bad thing. While I like the characters, they devolve into generic NPC’s, indistinguishable from your other on screen allies, desperate for their own cutscenes. The gameplay is fast and frantic and constantly rewards you, while giving you plenty of challenges to beat. Even with that, long sessions are boring. The intro to the gameplay section might have sounded as though I was just describing what the game is but it highlights the issue that outside of the static enemy placements there is nothing to do in each level. It’s also visually messy and the sound design is terrible but despite that, I can’t deny that I had fun. Word of warning though, it’s not for arachnophobes!