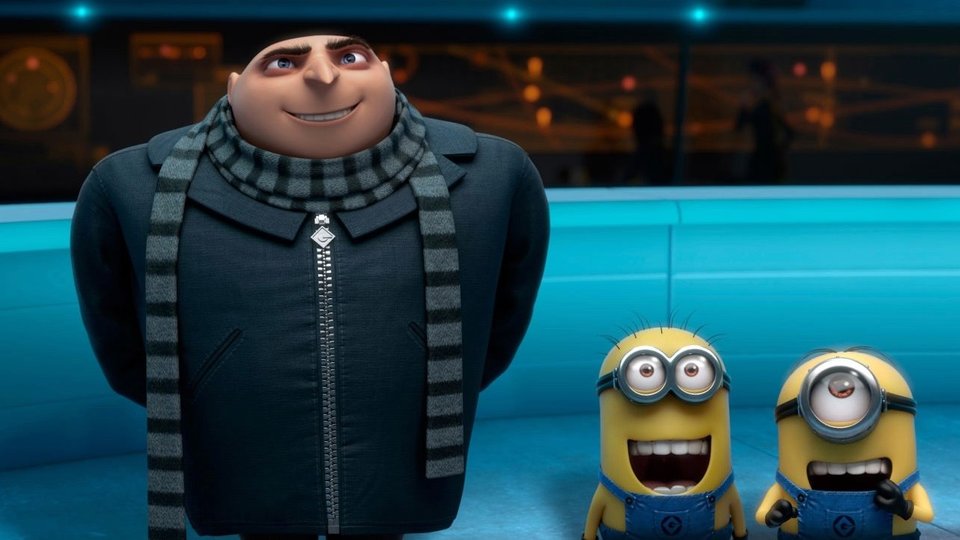 Gru (Steve Carell – Crazy, Stupid Love) and his adopted daughters are enjoying life. Gru has embraced his family responsibilities but does sometimes long for the good old days when he was a master villain. Luckily his old skill-set is just what Anti-Villain League require when they recruit Gru to go undercover with Agent Lucy Wilde (Kirsten Wiig – Bridesmaids). Their mission is to thwart a potential new weapon from being unleashed onto the world.

Despicable Me made a lot of money when it came out in 2010. The sleeper hit was never expected to be such a global success so a sequel was green lit quite soon after the first movie. With that came a fear that the film-makers would just replicating their original formula for a second outing. Thankfully Despicable Me 2 avoids that trap. It’s a movie that actually progresses the story in a believable way and comes in as a kind of caper-comedy that focuses on Gru adjusting to his new life.

Steve Carrell has found a family franchise to be proud of with Despicable Me. The character of Gru hasn’t lost any of his trademark sarcasm or wit but this time we are seeing the character evolve now that he’s a family man. Carell is at his best when his character is put into odd situations and the birthday party scene where he has to dress up like a princess is just comedy gold.

The supporting cast are all excellent with Benjamin Bratt on fine form as a salsa restaurateur who may hide a shadowy past. Taking over from Al Pacino at the eleventh hour, Bratt brings his usual charm and charisma to the table, however you still wonder just what kind of ‘creative differences Pacino could have possibly had with the project?

Kristen Wiig is perfectly cast as Gru’s partner in crime and potential love interest. She embraces the madcap nature of Lucy Wilde to give us an endearing and very funny female lead to bounce off. She also works with Steve Carell’s natural comedic timing to great effect.

Agnes continues to be the cutest thing you’ve ever seen and is once again voiced brilliantly by Elsie Kate Fisher. Miranda Cosgrove and Dana Gaier round off the girls but they don’t seem to play a very big role in this story. It’s a shame because their dynamic with Gru is what gives the film its heart. Hopefully a third film will feature the trio a lot more.

If you are looking for the main reason why Despicable Me works so well as a franchise, the secret doesn’t lie with the vocal talent (as impressive as they are). The Minions are truly hilarious and make the film with their irreverent and laugh-out-loud comedy. Every one of them has a great, individual personality and they are brilliantly put to use in this movie. Throw in a wonderful rendition of All For One’s ‘I Swear’ (complete with matching white clothes) and you have the best animated characters of the year! It’s worth the admission price alone just to see the Minions at play.

Despicable Me 2 is a wonderful family movie that has something for everyone. With Gru and the gang on top form, hopefully a third movie isn’t too far off. For now, take the kids and enjoy some quality animation with Carell and company in very impressive form. Throw in a decent story and great humour and you have one of the best summer treats for the family.