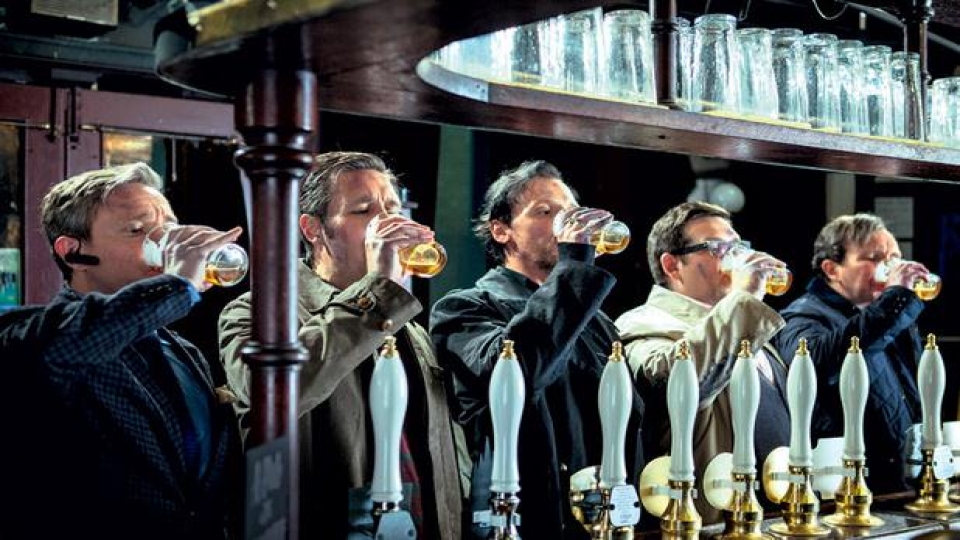 When they were at school, 5 friends attempted ‘The Golden Mile’ and had one of the greatest nights of their lives. Spanning 12 drinking establishments across their home town of Newton Haven, the pub crawl was an epic affair that left a lasting impression on them all. Some more than others though, as Gary King (Simon Pegg – Star Trek) now wants to re-band and try it again. However not all of the group look back on those school days quite so fondly, so Gary has his work cut out trying to coax them all back. But once they arrive in Newton Haven, they soon start to notice that their home town has undergone some quite drastic changes – changes that might just prevent them from making it to the twelfth and final pub on the crawl, The World’s End.

In it’s own way, The World’s End has the hardest task of summer 2013. The weight of expectation resting on the shoulders of this final chapter of the ‘Three Flavours Cornetto’ trilogy is immense. With Edgar Wright back behind the lens and a truly impressive ensemble gathered, you’d be forgiven for expecting a true genre classic. Sadly that’s not the case. The World’s End fails to live up to expectation and is only a mildly amusing pastime that doesn’t do their bigger legacy justice.

At its best, The World’s End has a good central dynamic that explores these fractured, old friendships well. The cast all deserve credit here with Frost and Pegg handling lead duties well. Paddy Considine is the pick of the rest and Rosamund Pike dutifully obliges as a thin but much-needed female presence.

The film deals with our love of the past and how we look back with rose-tinted specs – how we romanticise our youth and how it’s hard to sometimes move onto that next stage of your life. This is all covered in a slapstick comedic caramel but the biscuit centre is actually excellently paced and genuinely from the heart.

Reconnecting with old friends is something we can all relate to and the movie explores this in a truthful and humorous way. It’s no coincidence then, that as the human element dwindles, so does the quality. It tries to hold onto it during its overly dramatic finale but it’s too little too late by that point. The soundtrack is superb though and deserves a special mention for playing the retro card very well.

At its worst, it’s a film that seems happy to coast on past victories. It’s not enough to just have Pegg and Frost in a pub. The story has to match the ambition but at times, The World’s End feels lazy and devoid of true ingenuity. It writes itself into a corner and struggles to break free with an ending that’s too odd to be deemed a success and not clever enough to be truly left-field.

The World’s End, ultimately, proves to be a let-down but following Shaun Of The Dead and Hot Fuzz was always going to be a big ask. There are promising moments and the set-up is good, it just loses ideas and momentum far too quickly. Your good feelings towards Pegg and Frost will see you through this movie but you’ll leave wondering why this doesn’t scratch the clever surface of the past two films.

Fighting With My Family Blu-ray review

Mission: Impossible – Fallout coming to DVD and Blu-ray in December