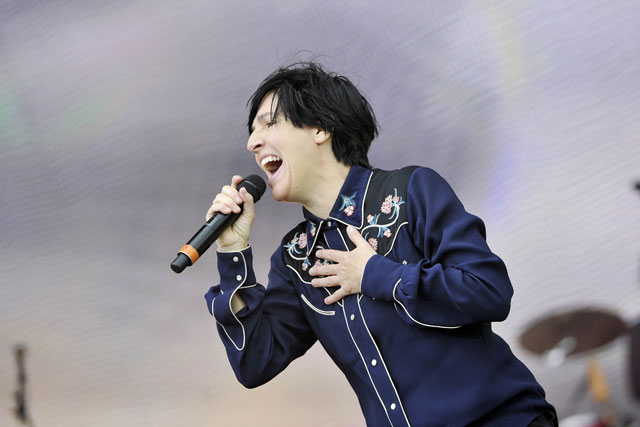 It’s hard to believe that Texas have been around since 1986. White on Blonde and The Hush were mega-sellers for the band and it doesn’t feel that long ago since they were released. After the massive success of White on Blonde and The Hush albums, they released a further few albums to mixed success, before Sharleen took the solo route and released her own solo album, whilst the band members worked on various projects. We were very excited to see Texas back together as a band, and about seeing them at London’s Hammersmith Aventim venue and here is our verdict.

The evening kicked off with Detroit City and the seated arena were soon on their feet, probably within the first minute or so of the band coming on stage. The atmosphere in the arena got going from the off and Sharleen’s wide smile and stage presence got everyone into a great mood. Sharleen Spiteri does not seem to have aged a day since the band first started out, looking cool with her guitar and swaying her mop of black hair around to the songs, like you would expect. Halo was up next and you can’t go wrong with such a classic, so early on in the gig – it was note perfect and Sharleen’s vocals sounded fantastic and showed what a great singer she really is. Once in a Lifetime swiftly followed and even if you haven’t heard the songs in a long time, they seem to just be engrained into your subconscious and we found ourselves singing along to every word, along with everyone else in the audience. Sharleen certainly knows how to rock the crowd and enjoyed flirting with us between songs, shared jokes and stories – the banter was great.

We particularly enjoyed her story about a moment when you are sitting in your house and you suddenly feel like having a bit of a party, an impromptu one, where you find yourself drinking the dregs of random bottles people have brought over to your house at one point or another…then you find yourself a few bottles down, before one of your girlfriends decided to tell you that she wasn’t happy in her marriage and deciding what to do next, a decision was made and everyone was happy, which was the inspiration behind Dry Your Eyes. We love hearing stories like these as it makes you grasp the concept behind the lyrics and Sharleen really connected and engaged with the audience throughout the set. She came across as not only a great front-woman, a great entertainer and also someone you can imagine being your friend.

There was a funny moment where the guitarist messed up a note, before the whole band paused for a second and Sharleen shouted out ‘that was so you – that was you! Any guitarist out there want to join the band?’ which made everyone laugh. The slight misdemeanor was quickly forgotten about and it was back to business. It’s hard to believe that I Don’t Want A Lover was written way back in 1989? The song got everyone singing at the top of their lungs and again, the atmosphere was just great. There were a lot of devout Texas fans in the audience and it was great to see so many people enjoying themselves. Texas are known for having several smash-hit songs, but it’s not until you see them live in concert, that you realise how many of them that they have in their back catalogue. There’s nothing quite like those guitar riffs on Summer Son is there? They’re just so catchy. Black Eyed Boy and Say What You Want sounded just as fresh as they did when they were first released and Sharleen’s vocals were again really strong and really powerful.

They took their time before coming back on stage for their encore, we thought they were slightly milking it and teasing the crowd, before they came back on! The support act of the night a Girl Called Johnny, who joined Texas on stage to sing Conversation and it was a lovely touch and the vocals combined worked. “Cause you make me feel, you make me feel wild, you touch my inner smile… so come on and make your rule and free me”. Again, we were lost in the moment, along with the crowd, who by this point had climbed on top of their chairs to get a better view, lovers were hugging and the gig was finished off on a high, with everyone singing in unison. It was a top night, by a top band, Texas – we thank you.