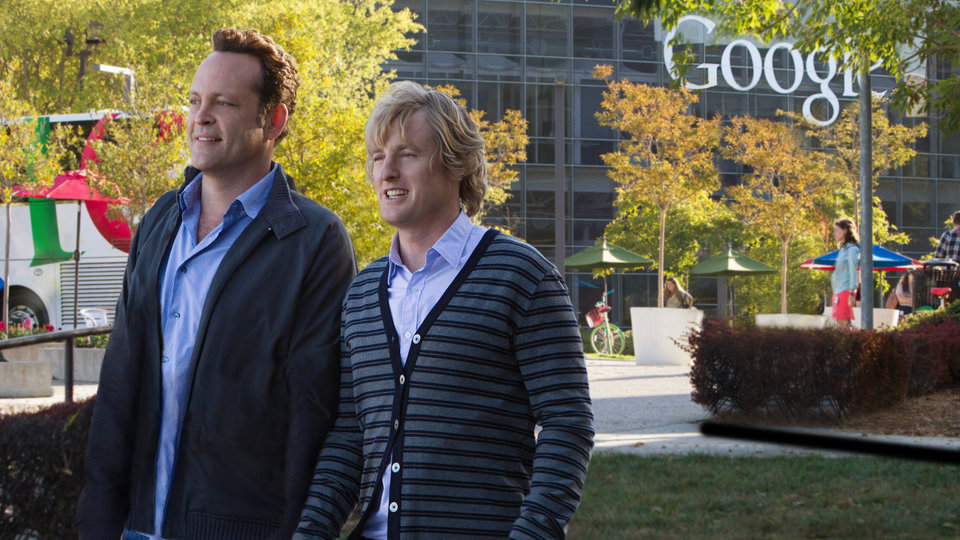 When they lose their jobs as watch salesmen, Billy (Vince Vaughn – Swingers) and Nick (Owen Wilson – Wedding Crashers) are forced to re-address their career-paths. With no transferable skills and in their early 40’s, job prospects look to be thin. That is until Billy decides to enrol them both as interns at Google. With a big age gap and no technical knowledge, the two men see if they have what it takes to make it in one of the biggest companies in the world.

The Internship actually has a relevant and topical premise. What happens when you need to restart your career having no new skill-sets in an ever-changing, competitive world? Written and co-produced by Vince Vaughn, The Internship should be an easy win, especially with his Wedding Crashers co-star Owen Wilson on-board to help. It has entertaining moments and a decent central message but its not the classic it should have been and leaves you wishing they had just made Wedding Crashers 2 instead.

The comedy is quite organic for the most part with Vaughn and Wilson’s ‘fish out of water’ routine being very funny. The problems start with the supporting characters who are all pretty thin. Their team, made up of supposed misfits, feel too convenient and predictable. The token villain of the piece is laughable in a bad way. Brit Max Minghella feels way out of his depth here and gives the film a silly level of parody akin to a Saved By The Bell villain.

The other interns do sometimes offer funny moments like Tobit Raphael as an Asian student who hurts himself whenever he gets something wrong and Josh Gad as a tech-savvy mute. Gossip Girl’s Jessica Szohr also shows up as a dance instructor come stripper (of course) who dutifully obliges when the script requires ‘a hot girl in lingerie’. Sadly Rose Byrne is not used enough which is a crying shame given how talented she is, especially with comedy as Bridesmaids proved.

Vince Vaughn continues to command the screen with his brilliant and unique charisma and charm. Equally, Owen Wilson plays his character sweet and relatable so there’s plenty to enjoy here. The two effortlessly work off one another and their chemistry is enough to pull you through a few lulls. Their first brainstorming session as Google interns is particularly hilarious – especially how they get to their hypothesis which ultimately results in them trying to track down a real-life Professor Xavier (from the X-Men).

There are decent cameos too from John Goodman as the guys’ former boss. If anything he should have been used more. Rob Riggle shows up as a motor scooter salesman with a liking for the older ladies at a retirement home and Will Ferrell makes a surprise appearance as Owen Wilson’s sleazy brother-in-law who runs a mattress showroom.

The Internship may feel like a giant advertisement for Google at times but there’s enough here to keep you amused. Despite the thin secondary characterisation and a predictable story, the film survives thanks to Vaughn and Wilson bringing their sass and energy to the table. The Internship is a good but forgettable film that passes time pleasantly enough.